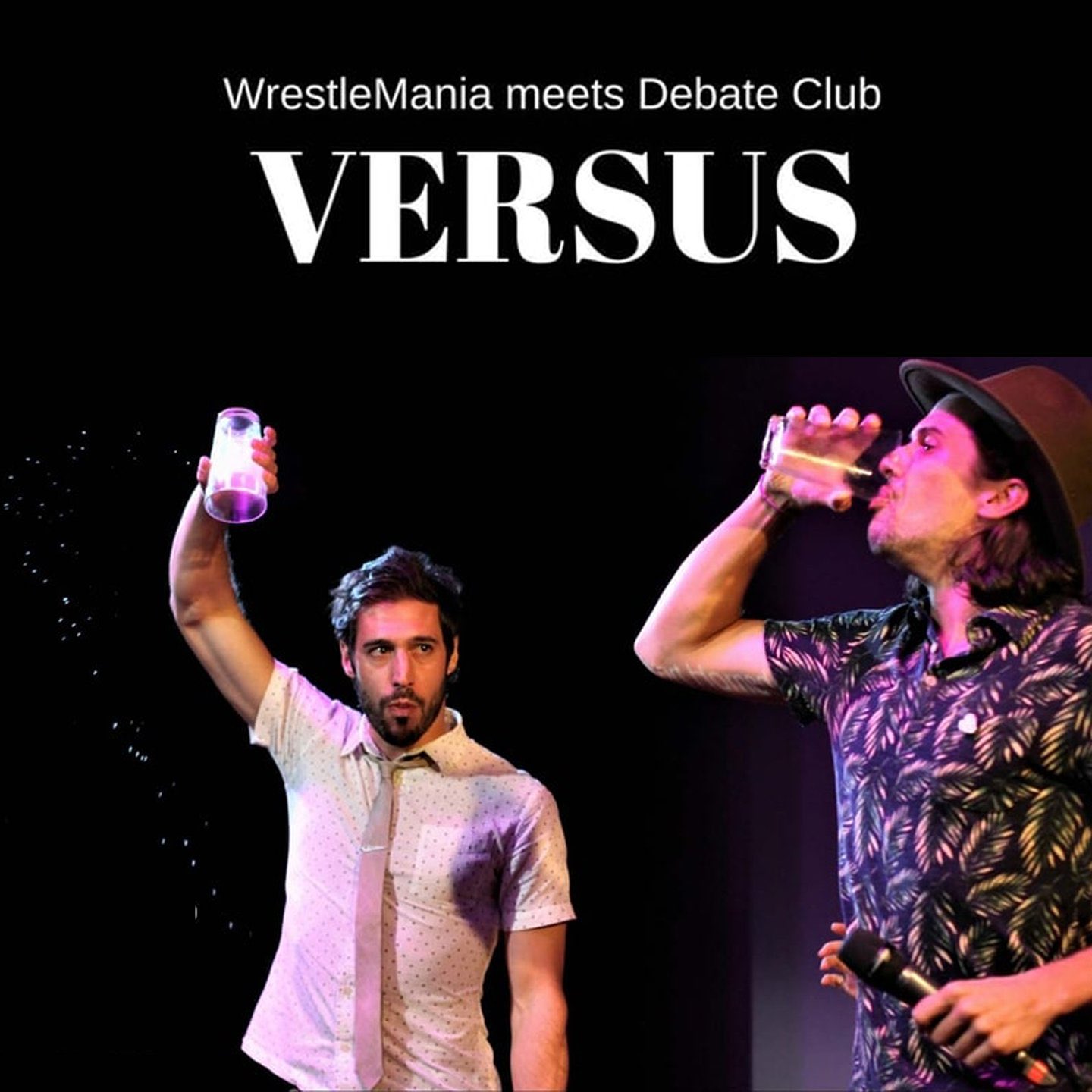 Welcome to my new series, Innovators. With this project I’m hoping to highlight people who are pushing the boundaries of interpretation, science communication, and educational visitor experience. And I’m pretty excited to feature, as the first instalment in the series, something about which you may have only dreamed until now: cabaret for total science nerds, otherwise known as VERSUS, brought to you by Dustin Growick, Meg Pierson, and Zak Martellucci—with their producer Diana Montano—in New York City.

I spent a little time on the phone with Dustin, a professional science storyteller and museum consultant, who is one of the creative forces behind this unique brand of insanity.

Dustin, what is VERSUS, and why do you do it?

“It started with me and my colleague Zak—we’re both science communicators. We had a friend opening this venue Caveat NYC, and they were looking for different types of programming. Zak and I were working with Museum Hack, where we took an entertaining, wild, adventurous approach to museums. Normally, in general, in a museum you have access to someone who knowledgeable but it’s the unilateral sharing of information—frankly kind of dry and a little bit boring. It’s fine if you’ve already bought into the experience but if you’re reaching new people it’s not great place to start.”

“So we thought hey, if we want to get people into science the way we are, how do we set up a fun, raucous atmophere, this ridiculous lively debate—how do we package it so that it’s consumable for people who aren’t huge nerds. So we came up with this format—born of Zak and I arguing about different scientific stuff.”

So what happens at VERSUS?

“The first thing, you check in at front door and get handed a poker chip. At the end of the show the referee Meg—who is phenomenal, hilarious, and great, goes around and you put your chip in the side that you think who won the debate. So the presentations are in these multiple little three-minute parts. The guest experts do a seven to ten minute presentation first—the whole point being each side nerding out as hard as possible.”

“We decided against a Q and A portion because somebody’s just going to get up and comment without a question anyway—so we go go out and get an endorsement from people who want to stand up for one side or the other—in ten seconds tell us why you think one side is better than the other.”

Who is your audience for this and how do you market to them?

“Caveat targets younger and relatively woke programming, a lot of social justice programming. It’s a 20-35 post-college demographic. It’s a more curious, intellectual nightlife-seeking audience. So our audience is that group as well. You have to look at your target audience and think, what is our tone and what is our brand? How do we communicate that consistently? So for us, how much bigger, more ridiculous, grandiose, fun, into happiness and revelry can we be than just the young woke demographic. So we’ve been slowly building an audience. You turn guests into your best marketers for you. We have friends of the show to spread the word—we have a good network in New York City.”

How do you recruit your experts for this? How you do you know they’re going to be able to entertain as well as rep their point of view on sharks or fish or cats or whatever?

“We look out for people who are going to be fun and engaging. Science Twitter is great for that, you can tell how people are going to communicate. Zak and I are each paired with the expert, before and during the show. We have conversations, we talk about the style of the show and talk them through it like, ‘Your job is to get people excited. Less is more, it’s ok to be fun and ridiculous. You have the credibility so don’t worry about it.’ We’re screening and coaching a bit. Not a lot- the most I’ve ever done is three 30-45 minute phone calls. Really my only goal is to destroy Zak, so I make sure what they talk about compliments what the other side is going to do. Some people need more hand holding than others.”

“You need the right people who have right rapport together, the right stage presence. Plus we have Meg, who is a tour de fucking force. She’s the ref, the emcee, and has no background or stake in the subject. Zak and I take sides- we are great friends, we have rapport and presence and that makes the show this performative thing—entertaining and engaging.”

Dustin, thank you for introducing me to the world of VERSUS. Here is one of their most recent debates: Birds vs Fish. The presentation starts at 15:30 ish.

Once you’ve spent some time with it, have a look at Cats vs Dogs. You won’t look at carnivores the same way again.

What Is Dialogic Interpretation?