Beautiful Burnie, Tasmania was an absolute smorgasbord of wildlife, and one that we weren’t really counting on. We had pulled into this small city without having made any plans, except for exploring. We walked along the shoreline enjoying the cool breezes for a while, then did what we always do when needing inspiration: found a coffee shop. We’ve been using a very handy app called Bean Hunter, which led us to a fantastic little spot called Infuse. This small-batch coffee roaster serves up one of the best cups of coffee in the southern hemisphere, and as we chatted with the proprietor we mentioned that we were naturalists and photographers.

He immediately suggested a nearby park where we might see the elusive platypus. Platypus! We didn’t dare hope—particularly as we were nearing mid-day and any self-respecting monotreme would be fast asleep—but it sounded like a good place to go for a walk. I looked it up on the map.

I’m still having a bit of trouble with the beautiful Ozzie dialect, I confess. I searched and searched for a spot called Fin Glide, and at last found the place he mentioned. Fernglade. Heh.  Off we marched.

As we walked up the road, we stopped to pay our respects to a flattened wombat (Australian marsupials sure seem to suffer from collisions—roadkill is everywhere.) Beside us in a picnic area, a now-familiar cackling distracted us: the laughing kookaburra. These large and boisterous members of the kingfisher family are absolutely unmistakable, both in appearance and in song. They’re wonderful birds. We arrived in the park and made our way to the water’s edge, hoping it might be fairly burbling with platypuses… but nothing was there. Nearby, in a grassy clearing, a strange fowl-like bird shepherded its babies away from us. What an odd creature: the Tasmanian native-hen. One of Oz’s four flightless birds (can you name the other three in the comments below?), this character isn’t a fowl at all, but a member of the rail family like a moorhen or coot.

We continued our walk along the length of the creek. One of the prettiest birds I’ve ever seen has been popping up with a fair frequency as we make our way around Australia: the superb fairy-wren. The males have a dazzling blue plumage and are tireless songsters. They’re wonderful to watch; the hard part is trying to photograph them while they bounce from branch to branch. The females and young can be quite bold, hopping right around your feet as they forage for insects.

Hanging out in the general vicinity of the fairy-wrens was a tiny warbler-like songbird that we hadn’t seen before. They weren’t too happy about our presence, judging from the harsh buzzing calls they kept sending our way. Or maybe it was the fairy-wrens that irritated them. I had no idea what they were, but I managed to capture one on film (that’s “film”) for later identification. Turns out it was a local specialist, the Tasmanian thornbill.

We made it all the way to the end of the trail without having espied our platypus quarry. No matter—it was a beautiful place. Wandering back toward the trailhead, I suddenly caught a poodle-sized fuzzy shape out of the corner of my eye. A wee wallaby! Or so we thought; this was a pademelon, a particular flavour of small kangaroo-like marsupial found in that neck of the woods. We’d been hoping to see scads and scads of ‘roos and wallabies on this trip; they haven’t been as forthcoming as we’d expected. This was a real treat.

(Pademelon. Thanks to James Nyland for the photo.) 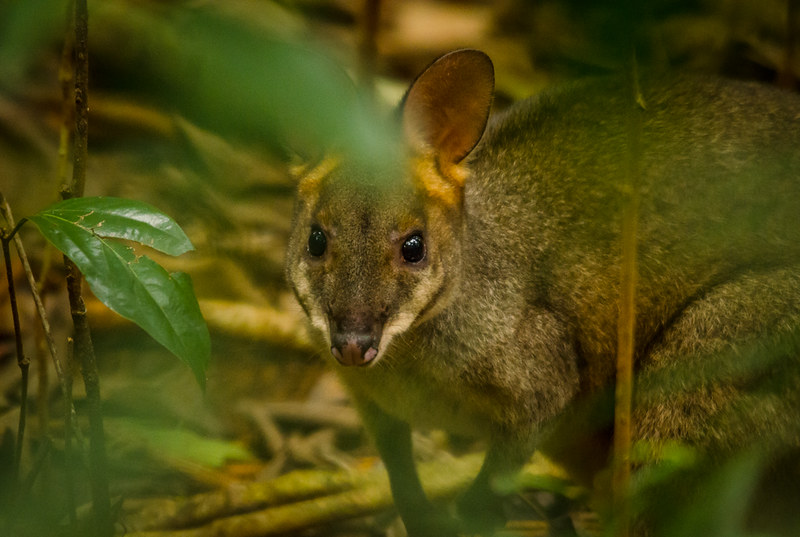 We had been wandering along the slow-moving creek for an hour and a half or so. Finally we found ourselves near the trailhead again, and paused for one more look.  By this time the breeze had calmed completely, and the creek was absolutely placid—any movement at all in the water would show up. I focussed my binoculars on a spot across the way where the murky water had undercut the bank a bit, and a few branches had fallen in: a perfect platypus hideout, I reasoned. And my heart nearly skipped a beat when I saw it—first a ripple in the water, and then another. At last, it surfaced briefly and was gone again. But I had seen it! I called over to Tom to point out the spot, and moments later the marvellous monotreme made its appearance again.

They behave very much like any other marine mammal when feeding, surfacing for only as long as it takes to get a good breath or two, and then back to work. I imagined it poking its bill through the muddy bed, its electro-receptors at work finding tasty invertebrate morsels in the mud.

(The following shot is not mine, alas. Many thanks to Trevira at the Flickr Creative Commons.) 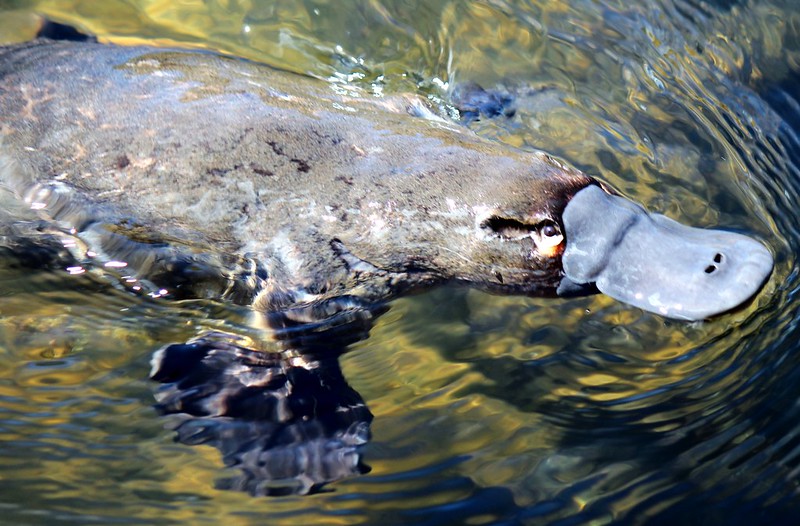 We watched for several minutes, following its progress along the creek’s edge. At last it disappeared, and we sat in silence for a moment. Never in all my life did I think I’d see a platypus in the wild, after watching countless nature documentaries about them as a child.

We made our way back to Burnie and the cruise ship, images of pademelons, kookaburras and platypuses dancing in our heads.