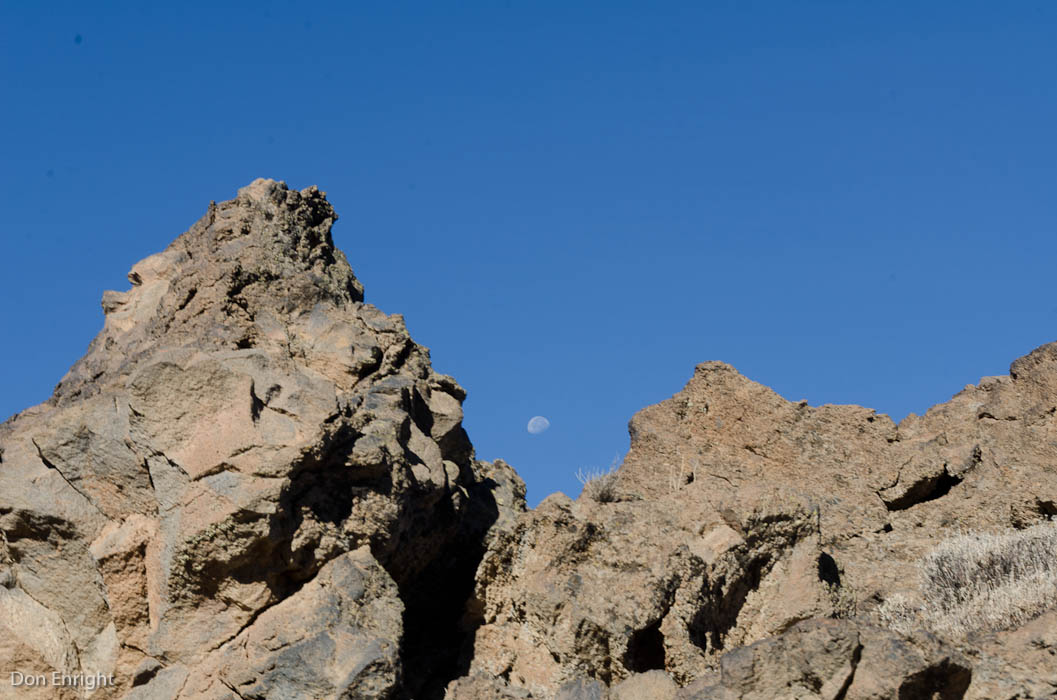 To a naturalist, the Canary Islands are pretty much a dream.

My mother once told me that the true test of a relationship was hanging wallpaper together. But having returned from the fantastic Canary Islands, I can go one better: we rented a car in a foreign country and survived. In fact, we had a blast.

We were cruising the islands of Macaronesia, which are the Atlantic islands: in our case, Madeira, the Azores, and the Canary Islands.  And for a naturalist, the Canary Islands are pretty much a dream. Any chain of islands is a science nerd’s playground; as with the Galapagos, the Canaries are a place where wildlife has gotten blown in (or drifted in on the water), stayed, reproduced and evolved into really cool stuff.

Situated a nautical stone’s throw from the Sahara, the island of Tenerife is dry. The landscape borders on the lunar, in fact. That’s just one of the cool things about the Canary islands: they range from the desert-like Lanzarote in the east, to the lush green islands of El Hierro and La Gomera in the west. Tenerife is in the middle, and our destination on this particular day would take us over some of the most beautifully bleak terrain I had ever seen:  the tremendous volcano of Tenerife, El Teide.

Oh, we could have signed up for a shore excursion, and those who did so had a great time, I’m told. But I needed to take my time here: there were photos to take and bird songs to identify and endemic species to track down. And you never want to be that knob who is always dragging behind the group, holding everyone up. So we splurged and rented a car.

North American cruise ship travellers like to regale each other with horror stories. Legends of all the things that can go Horribly! Wrong! with car rentals are right up there with the best of them. But we booked online, showed up on time, and everything was ready. Our agent spoke perfect English, though we chose to speak Spanish with him. (And by we, I mean Tom, who chatted like a boss while I nodded earnestly and offered “Si, claro” from time to time.)

The roads in the Canary Islands, I’m pleased to report, are top notch. Better than in mainland Spain. Better than home, really, except that on Tenerife, once you really start to climb, they get narrow. Really, really narrow. I had a great-aunt Frieda who used to break out the rosary beads going through the Rockies; they would have been smoking between her fingers here.

But what a pleasure to be able to stop wherever we pleased. The forests of the Atlantic islands are amazing- in fact they constitute a world heritage site. Called Laurel forest ecosystems, they are a beautiful and varied network of evergreen broadleaf trees with a whole host of endemic species that depend on them. The first of these to greet us was the Canary Islands chiffchaff, a local descendent of a winsome old-world warbler that got blown there countless generations ago. (The name is onomatopoeic- they really do say “chiff-chaff, chiff-chaff”. Any European knows the call by heart, but they’re quite a novelty to us New-World types.)

Higher, ever higher we drove and as the lanes narrowed- wait, did I say lanes? I meant lane. Singular, but alarmingly two-way. With huge freaking tour buses. But more about that in a moment. As the road narrowed, the air thinned and my GPS told me we were getting up to 7000 feet. Stopping for a snack we spotted the elusive bugloss, which had been high on my wish list. Well, it’s not really elusive; it’s a plant. But it occurs nowhere else on earth but on this island, and there it was. Echium wildpretii is quite a lovely thing in bloom, but at this time of year it was reduced to a strange, tormented fish-skeleton shape. Kind of fitting for Tenerife’s austere environment.

Onward and upward, the peak of El Teide enticed us. Cheered by the blue skies (and air conditioning, let it be said), we got on famously. I must say the only tense moment was when we were nearly wiped off the planet by a very quickly-approaching tour bus. The road was only slightly wider than a Honda Civic at this point, and we were on the inside of a hairpin turn. And it came at us. I headed for the (mercifully shallow) ditch and he hemmed me in and stopped. One didn’t need to hear his Spanish to make out the gist of what he was saying- the gesticulating through the windshield was enough. It soon became clear to me that this was, for him, a fairly everyday occurrence. He knew what to do, which was edge forward. I, on the other hand, was busy trying not to soil myself and every instinct within me was urging me to back away from this behemoth. The right thing to do, I eventually figured out, was to also inch forward, and we squeaked by one another and went our merry ways.

My partner sat quietly in the passenger seat the whole time, his face ashen. The show of restraint was, I must say, inspiring. God knows the toll it might have taken on his inner person.

Finally at the summit of the highway, we parked and tramped around like school kids, the weird crunch of light-as-styrofoam volcanic rocks under our feet. Both sun and moon were overhead and the reedy twitter of the Bertholet’s pipet, another endemic songbird, floated toward us.

And to conclude our adventure, a bit further onward, we stopped and stood perfectly still, surrounded by nothing but rock and sky. The silence was nearly overwhelming. Absolute, complete, utter silence: one of the world’s rarest natural resources, here in the wilds of Tenerife, Canary Islands.

I think you should go.