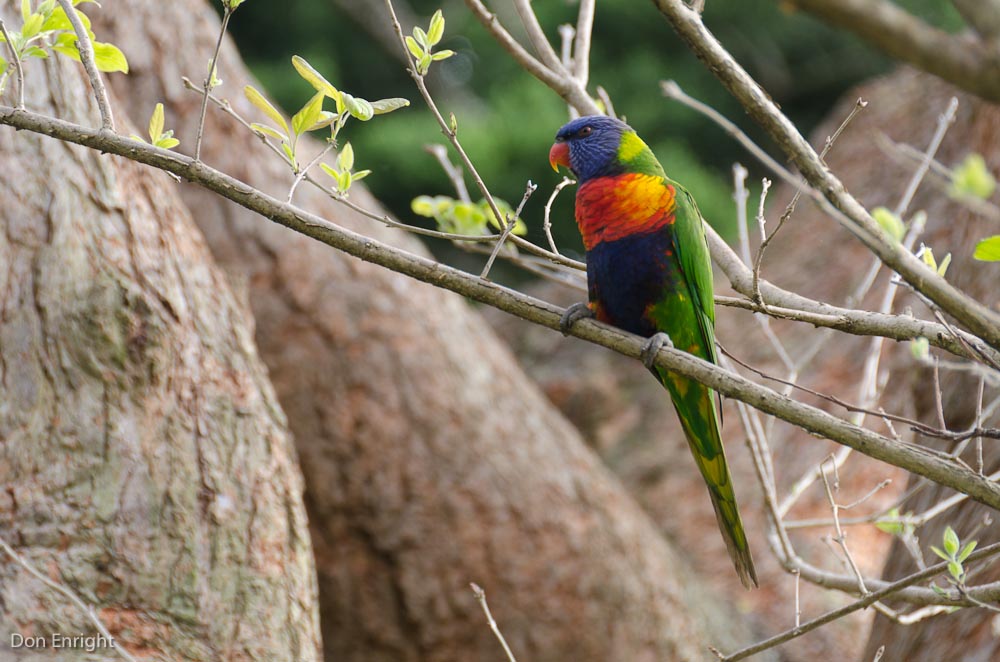 We went for the trees, we stayed for the birds.

Arriving in Sydney, Australia by cruise ship is unforgettable. The journey takes you between the rugged cliffs of the outer harbour (“The Heads”) and into beautiful Sydney Harbour where you sidle up alongside the exquisite Sydney Opera House, to dock right at the Circular Quays in the heart of the city. (Rival city Melbourne can’t really compete; in that town, you pull up to a dingy industrial port and take an overpriced bus for 45 minutes through traffic to get to town. The experience is a bit of a fizzah, as the Ozzies say.)

The only city that rivals Sydney for a glorious welcome might be Vancouver, though I may be biased in that regard. The experiences are comparable: both are bustling urban centres that have managed to conserve their beautiful waterfronts. Both have beautiful walkable or jog-able sea walls that attract locals and tourists alike by the thousands. And while Vancouver has the legendary Stanley Park nearby, with its acre upon acre of primal forest, Sydney has the incomparable Royal Botanic Gardens just a few minutes walk from the harbour. It’s a fantastic place to relax, stroll around, and get acquainted with Australia’s singular flora and fauna.

The gardens were established way back in 1816 as part of the nearby Governor’s Domain, and they remain Australia’s oldest scientific institution. In the early days, the gardens were a place to study and acclimatize plants from other parts of the world, to see how they might fit in locally. Now, they’re more a showcase for Australia’s unique flora—a place to see truly unusual plants from all regions of the country, all laid out and labelled for you.

The gardens are also a wonderful place for Sydney-ites (Sydnians? Sydnegonians? Sydnegians?) to unwind in a tranquil, uncrowded park right next to the heart of downtown.

We arrived early one weekday morning, eager to see spring wildflowers in bloom, and were immediately struck not by the flowers but by the bird life. Australian white ibises are common as starlings and just as tame. Wood ducks (the Australian variety, looking a bit like our wigeons) strolled through the grass nearby, and we were more than a little excited to see the outrageously colourful rainbow lorikeet streaking by. (Parrots look so sedentary when you see them in a cage; in fact they can fly like bullets.)

Australian bird life poses a truly delightful challenge to birders from away. There are enough representatives of familiar families to keep you from feeling completely hopeless (moorhens, crows, gulls and terns), but there is so much that is truly novel to the foreign birder that excitement lurks around every corner.

One of the most diverse families here are the honey eaters. They are a huge group of highly animated songbirds that specialize in nectar feeding (though they take a fair number of insects too.) Noisy miners, New Holland honey eaters, red wattlebirds and many others fill the air with their calls. Some sing sweetly, others squawk like turkeys. All are surprisingly loud.

Australia is well-known for its cockatoos and cockatiels, and we were gobsmacked to see the huge sulphur-crested cockatoos that make the botanical gardens their home. We stumbled across them feeding on grass shoots on the lawn, surrounded by lowly rock pigeons. Really, we would have thought that kind of society beneath them. But there they were, tame as squirrels on the grass.

Not far away, masked lapwings stood calmly preening. These are plovers, related to our killdeer, and while they look custom-built for wading they actually spend most of their time in the uplands. They’re bold birds, nesting on baseball diamonds, playgrounds and even airfields where their refusal to get out of anyone’s way has led to a few air strikes. Lapwings are armed with a strange little claw on the wrist of their wing, and they’re not afraid to use it against any wayward chihuahua that wanders near their nest.

Another fascinating family of Australian avifauna are the butcherbirds, and the Royal Botanical Gardens are home to two of them: the Australian magpie and the pied currawong, which must take the prize for the most classically Australian-sounding name.

Magpies and currawongs behave a lot like crows, skulking about in search of grubs and lizards and anything else they can find, including handouts. But the magpie is a remarkable singer, with a gentle, almost bell-like quality to its song. It’s quite a contrast to the magpies back home (who are not related at all, though their personalities are quite similar.)

A few birds have eluded us still at the gardens: apparently kookaburras can be seen there with some regularity, and we hope to see a few of the gorgeous little fairy-wrens too. Up until a few years ago, one could also expect to spy the 20,000-odd fruit bats that roosted there by day, but the garden authorities took exception to the way they were trashing the trees and encouraged them to roost elsewhere, with the aid of heavy metal music and garbage can crashing.

So if ever you find yourself in beautiful Sydney, set a morning aside to stroll with the locals in the Royal Botanic Gardens. It really can’t be beat for a gentle introduction to the bird life of an amazing continent.