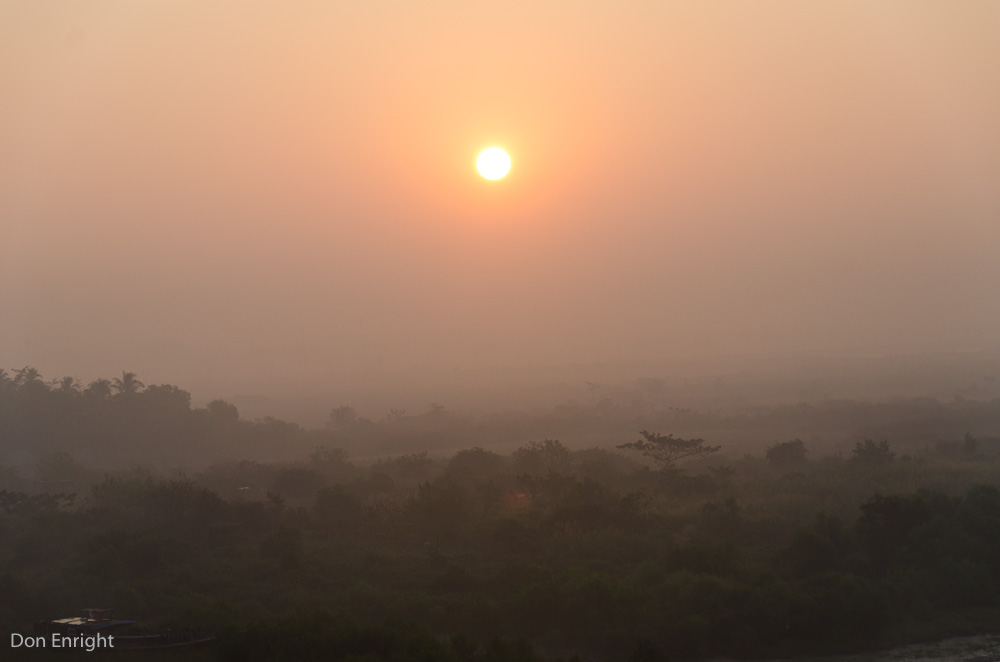 “This is Burma. It is quite unlike any place you know about.” -Rudyard Kipling 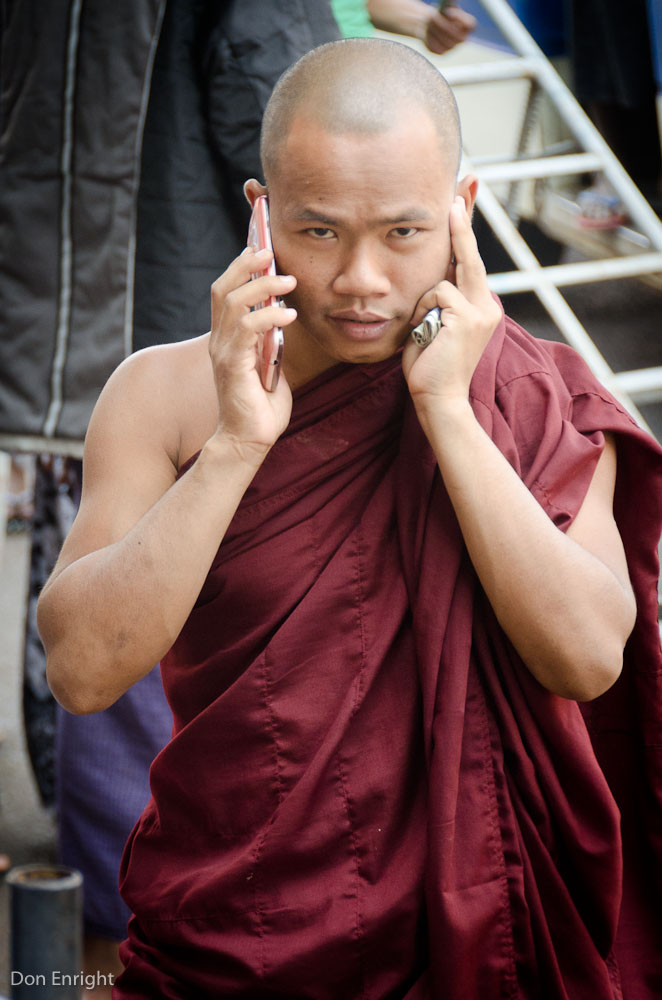 I never in my life imagined I’d be visiting Burma, or Myanmar as it is now known. Yet here I am, bouncing along a narrow, rough country road toward Yangon (Rangoon, as Mr. Kipling would have known it.) Men in traditional longyis, sarong-like skirts, zoom past on motorcycles with wives and children holding on tight. Mist rises over fields dotted with palm-and-bamboo thatched houses, as egrets flap lazily from ditch to ditch. 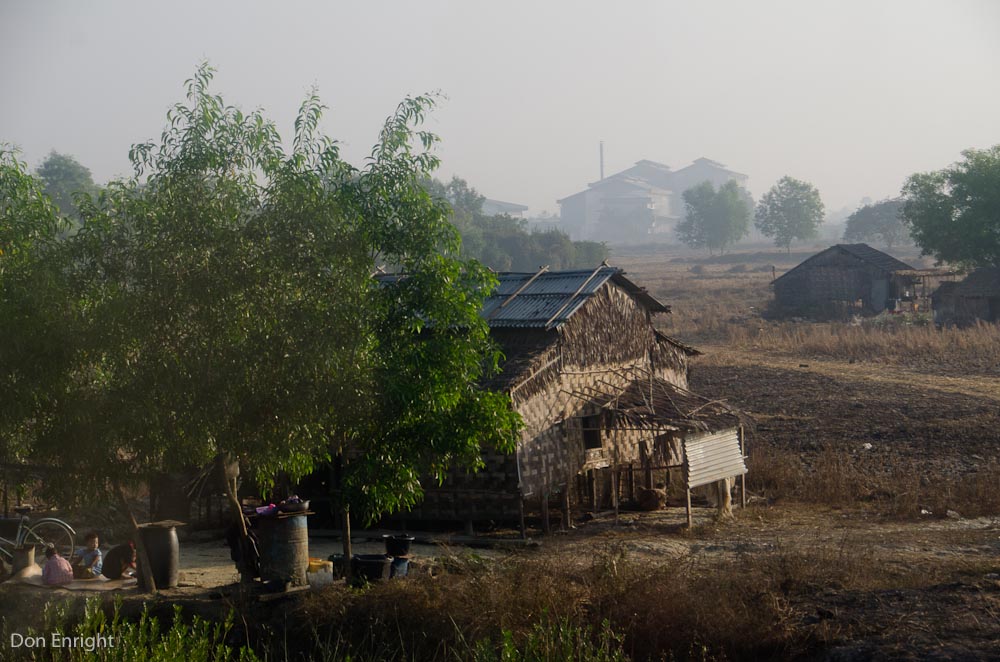 Myanmar appears to be nation caught between past and present. Or, more fairly, a nation lurching forward, shrugging off its painful history. 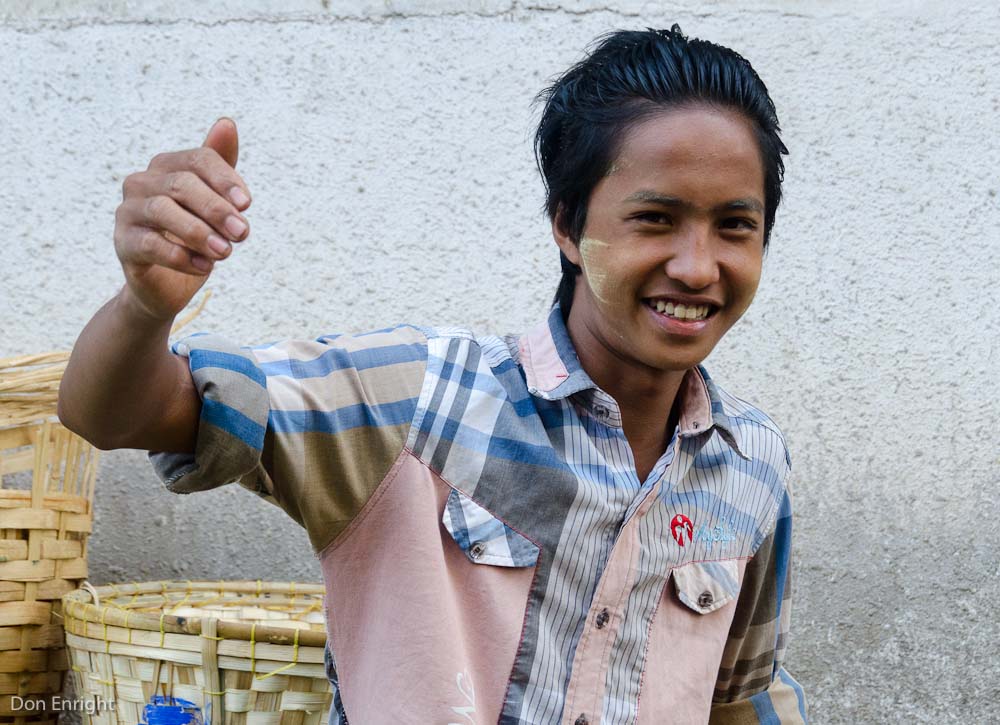 As we arrive in Yangon, a sprawling, almost-modern city, locals turn to watch us pass. All the women and most of the men have yellow makeup on their faces. It’s thanakha, a yellow paste made by grinding an aromatic local wood. A young man walks up to me to say hello and practice his English, and his mouth is blood-red inside. It’s a bit off-putting to me at first, but he’s chewing betel, a palm leaf wrapped around a bit of tobacco or nut. All of these things jump out at me; what an odd, other-worldly place. Yet after a few minutes, they are as normal as the taxis passing by or the dogs lying in the shade. 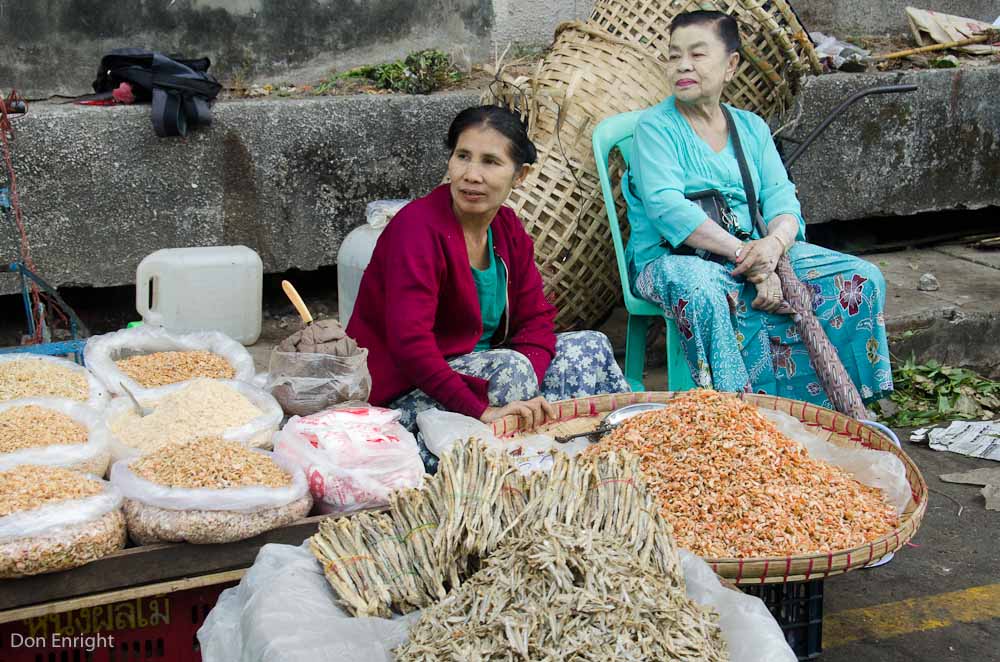 I had been following Myanmar’s story for some time. Like so many others of my generation, I was captivated by the story of Aung San Suu Kyi, de facto leader of the opposition during the many years of military dictatorship here. I have always thought of her as Myanmar’s Nelson Mandela, if you’ll forgive an over-simplistic analogy, and wondered with some skepticism if her release from prison in 2010 really indicated change. Yet our very presence here signals that it’s a more open society than ten years ago. The so-called saffron revolution of 2007, when the nation’s much-respected Buddhist monks (who actually wear maroon robes) took to the streets, seems to have changed things for the better. I found the flourishing news media a very hopeful sign; freedom of the press seems genuine and it’s heartening to see so many locals devouring the dozens of small newspapers sold at every street corner.

We walk and walk through streets crammed with merchants and motorcycles. The produce is aromatic and fresh; the fish equally, almost overpoweringly, so. Sumptuous Buddhist temples crop up here and there, pagodas of gold brightening up an otherwise austere cityscape. Monks and nuns walk the streets and everyone stops to converse with them; occasionally a troupe of very young nuns-in-training files past with shaved heads and pink robes; there’s an air of seriousness and discipline about them that belies their youth. 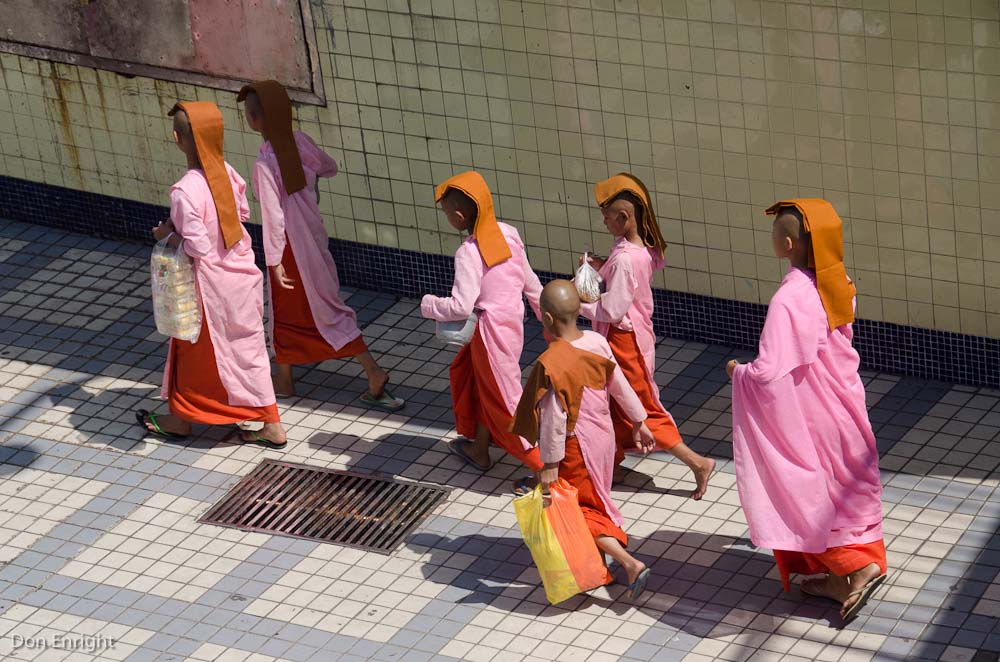 We photograph everything we see, and though I tower over the local people, few seem to give us much notice. The taxi drivers approach, but everyone else simply leaves us alone. There’s work to do and goods to sell; as noon approaches the street stalls fill with hungry customers who pick out their soups and satays and strange brown flan-like desserts. Everyone looks relaxed despite the street-side chaos. 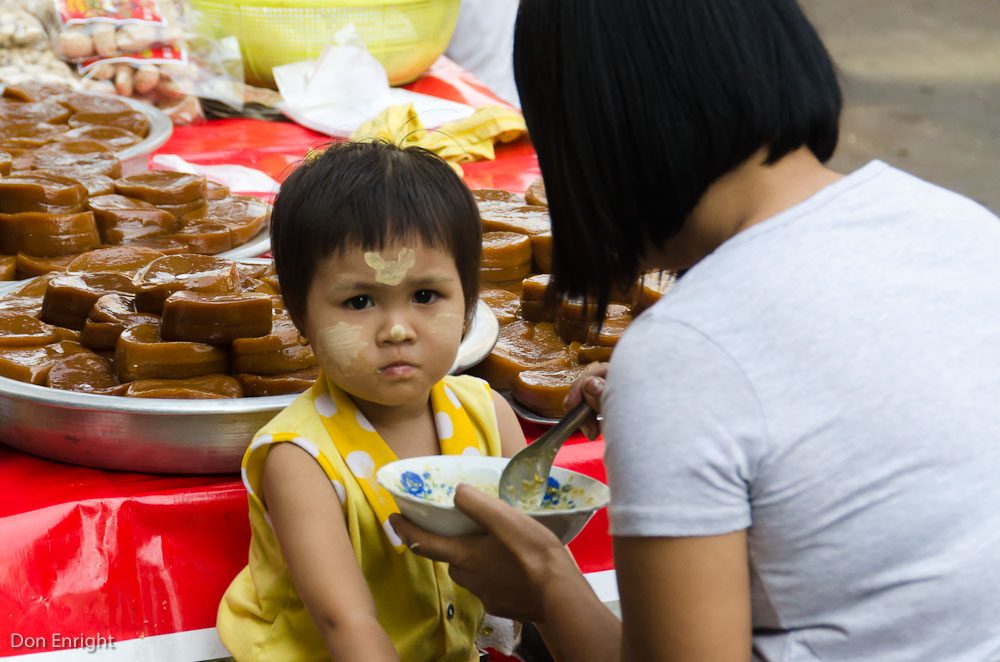 I will be following Myanmar’s story even more closely from now on. There are still many milestones on the “roadmap to democracy” that need to be passed, and the constitution still appears to be stacked against Suu Kyi (they simply call her the Lady here). Ethnic tension and violence still plague parts of the country; there’s a bizarre form of radical, racist Buddhism endemic to the country, if you can imagine such a thing. 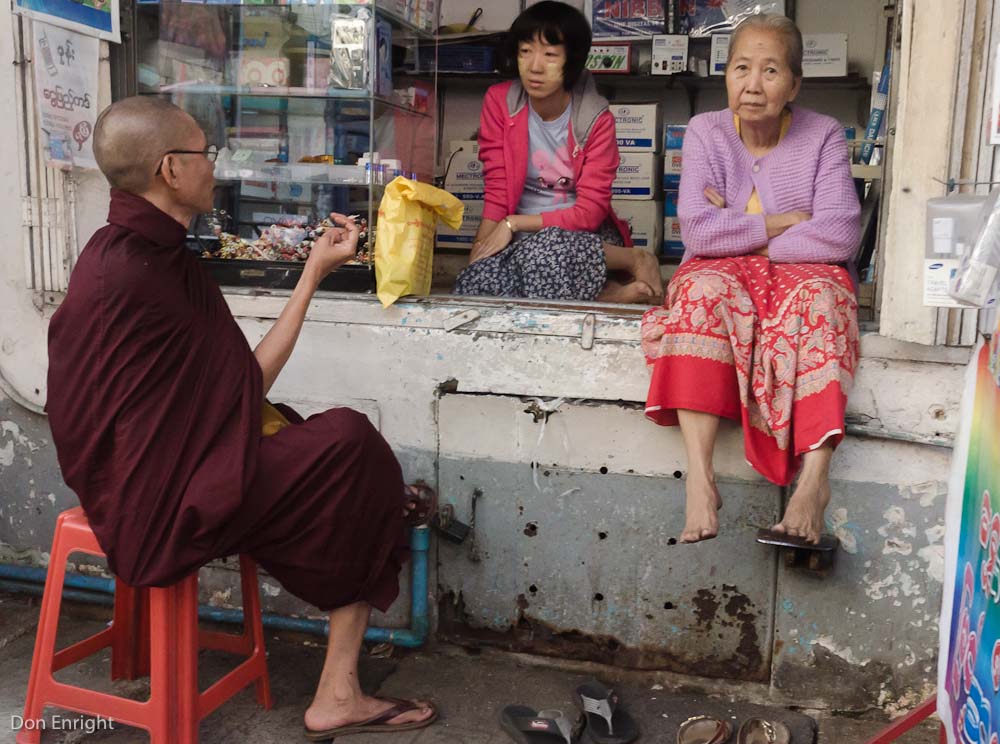 2015 will be a pivotal year. Here’s hoping the elections are free and open and successful—this beautiful, singular nation deserves nothing less. 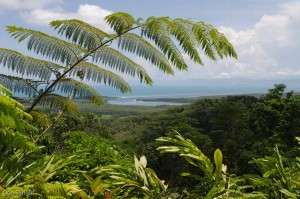 A Night In The Rainforest 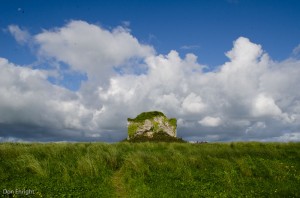