We’ve been talking a lot lately about the decline of classical stand-and-deliver interpretation, and the rise of experiential, inquiry-based or dialogue-based programming.

I think it’s a healthy dialogue. For decades, sage-on-the-stage programming was the default interpretive medium. You took an interpreter, put her in front of an audience, and made people listen to her. Simple.

But it wasn’t always effective. In fact, for some audience, it was never the right choice. We have learned so much about our audiences and their needs, interests, and motivations in recent years— thinking we could reach everyone by simply speaking from a podium seems a bit naive.

And yet… I was struck by an essay this week by my colleague Jon Kohl, who reminds us that oration isn’t dead. Ted Talks have inspired a generation; a good talk (and lord knows they aren’t all good) can provoke, reveal, and transform.

Public speaking can change the world. Michelle Obama proved that this month (as did her husband before her, Nelson Mandela before him, John Kennedy, Martin Luther King, Abraham Lincoln…)

Think about it: a great public speaker is almost always a great interpreter. They weave stories; they understand their audiences; they evoke feelings, they build momentum, and they skillfully invoke simple, compelling themes.

I’d like to pursue the idea of oration as visitor experience over the next while in my writing. And I want to start with the first step: a great presentation requires a great script.

And that, right there, is the deal-breaker for most interpreters. We refuse to work from a script. Many of us refuse to compose our programs in advance at all, beyond stringing a few thoughts together in a two-page outline.

“I can’t work from a script. I need to tailor my presentation to each audience. That’s my job as an interpreter.”

Sure… and that was one of my most cherished beliefs about my work, until I discovered I was full of crap.

Here’s what I found, during all my years of proudly-never-following-a-script. (The seat of my pants used to have its own frequent-flyer program.) I was actually working from a script the whole time. Does the following sound familiar?

You write a two-page outline for a program, and you flesh it out, in your head,  as you’re driving to your program. (Professional, wot?) And then you stand in front of your group and you drop whatever pearls of wisdom that pass between your ears at any given moment. And if you’re a talented interpreter, some of it will be good. And you register the good stuff, file it away in your mind, and keep it for next week.

Week two, three, four and five are a process of recycling what worked the previous week, discarding what didn’t, pulling new things out of your back end, and squirrelling away the good bits again.

By week six, you’ve got a pretty good script. Yes, it’s a script. And you stick to it for the rest of the season. Don’t tell me you don’t do this. I have been supervising interpretive programs since 1988, and it’s pretty much a universal practice. I actually had an interpreter this past June swear up and down that she would never run off a mental script… until I ran into her again in August. She said she had just caught herself doing exactly that. “And I mentally waved my fist in the air and shouted, “Eff you, Don Enright,” she said.

Rather than improvising a script for five weeks—and cheating those five audiences out of the polished program it might become by week six or seven—why don’t we do that script development in the office before week one? Why don’t we take a little more pride in our program preparation? Why do we feel that diminishes us as interpreters?

“I don’t want to sound like I’m reading off a script.”

I’ve got news for you: you may already sound that way.

Let’s face it: it’s really, really hard to keep a presentation fresh after eight weeks running. The ability to deliver a program that sounds as passionate, as honest, as fresh, as inspiring at the end of the season as it did at the beginning is what separates the great interpreters from the wannabes.

But it has nothing to do with whether or not you’re working from a script.

I once saw actress Viola Léger deliver a performance of La Saguine that was weepingly beautiful. It’s a one-woman show: she has to carry the whole thing. And carry it she did—my god, what a beautiful play. She played that role for 40 years solid. Forty years!  I can’t imagine it was easy for her—but she certainly made it look that way.

Think about the last great film performance you saw. Do you think Natalie Portman or Meryl Streep ever shows up to work and says, “You know what guys? I can’t work from a script. It just makes me sound stilted.”

Do you think Bill Shakespeare ever said to his actors, “Hey, here’s a two-page outline for you. If you could just try to make a great transition from the part where the monk marries you up to where you drink the poison? Verily, that would be great.”

Actors remain fresh and compelling by remaining in the moment; by remaining present to their fellow actors, by discovering their character’s story anew every single night.

Interpreters need to do the same, whether we work from a script or not.

This was my big epiphany about my own practice: if I am present to my audiences, and keep a sense of discovery about my subject, my interpretation is compelling.

And if I’m phoning in my program, it’s going to suck. Script or no script.

So now I write scripts. And if my script is tight and intelligent and well-thought-through, with a strong theme, a logical and satisfying arc, a series of reasonable premises each building on the last, with rich analogies and warm personal touches… my interpretation kicks ass. It kicks way more ass then any product I might pull out of my butt on the spur of the moment.

Write a script. Make it good. Do your program development in the office, where it belongs. Memorize it.

And then, deviate from it. Be in the moment. Take questions. Adapt to your audience. Try new things. Make discoveries and breakthroughs right there in front of your audience.

You’ll discover that a strongly-written program brings you more of these aha! moments than a seat-of-your-pants production.

At least it did for me. 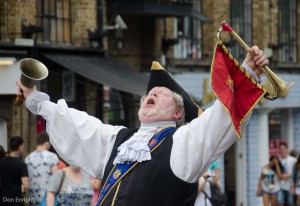 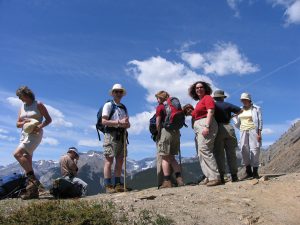 Interpreters in the Experience Economy