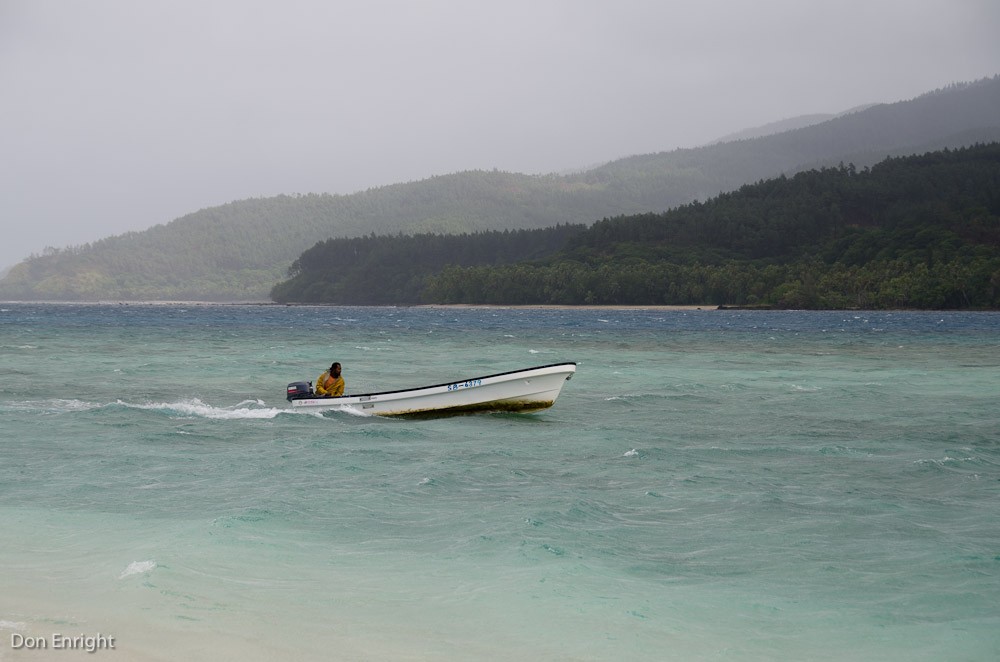 Parrotfish: Not just another pretty face on the reef.

We’re visiting beautiful Mystery Island, in the South Pacific nation of Vanuatu. It’s a tiny spit of land just adjacent to the bigger island of Aneityum. The Aneityum people say that Mystery Island is inhabited by spirits, and nobody is allowed to live here, though it’s ok to visit during the day.

I haven’t found any spirits yet, but it’s a pretty fascinating place. We’ve got scarlet honey eaters singing overhead…

…and all through the low bushes are some of the largest spiders I have ever seen in the wild. Learn from my fail: don’t go wandering off the trail through the bushes looking for a place to pee.

Oh, and the Mystery Island has just enough room for a very short, grass-covered airstrip, and I have to keep myself from shouting, “De plane! De plane!”

While there’s plenty to explore on land, I’m interested in what’s in the shallow clear water all around us. The coral here is amazing, as it is all around Vanuatu.

There are clownfish nestled among the anemones, and utterly fabulous blue Linckia sea stars.

And there are completely repulsive sea cucumbers, too. Or should I say expulsive: when threatened by a predator, they release a few internal organs out their anus as a distraction.

But coolest of all, I’ve discovered that this is a great place to see parrotfish.  Parrotfish are an absolutely spectacular reef fish, and one of the bigger ones to inhabit the shallow areas. They get up to about 30 cm (1 foot) long, and are as fat as a rainbow trout. But it’s their colours that really set them apart from the others: they are the most amazing blues and turquoise greens you’ll ever see. At least the males are. Or the super males, to be more accurate. I should explain. You see, if you study reef fish for any length of time, you’ll discover that any traditional notions you’ve ever had about gender go right out the window.

Parrotfish society has a kind of third sex. First, there are basic adult males and females. They’re not terribly colourful, and they’re virtually impossible to tell apart form each other. Then there are the super males: big, bright, beautiful and dominant (and so completely different from the lesser adults that for 200 years they were thought to be separate species.)

Where do these super males come from? The drab females, of course. Each time one of these bad boys dies, one of the females (yes, females) changes sex and becomes a super male, and goes on to select and defend a harem of females. Those lesser males? They’re stuck with trying to get lucky whenever the super male isn’t looking. They’re sneakers, as the biologists call them. Endowed with smaller muscles but bigger testes, they try to swim up above a mating pair and shower them with sperm in hopes that their higher volume might have some effect. One does what one must, I guess.

Parrotfish play a pretty vital role in the coral reef. They eat it. I guess that sounds destructive, but it’s actually fairly important. Their teeth have become fused into a very hard set of plates, kind of like industrial-strength dentures, and they use these to bite straight into hard coral. (You can actually hear them crunching when you’re snorkelling near them.) They’re after the algae that grows on dead and dying coral.

They have a weird inner jaw at the back of their throat, with a set of grinding teeth back there that break down the hard parts: the coral’s calcium carbonate. And while they digest the algae, they poop out the hard bits as sand. Yes, they poop sand. Lots of it: up to 90 kg (200 lbs) per fish per year. Seriously, they must have very healthy colons. All that luxuriant white sand you’re stretched out on getting that fabulous tan? Yes, it’s pooped-out fish crap.

Now, as they’re one of the bigger fish on the reef, you wouldn’t think they have too much to worry about in terms of predators. But they need to keep their eyes out for lemon sharks, who seem to be intent on taking them to lunch. To keep themselves safe at night, they find a nice crevice in the reef, wedge themselves into it, and stay put for the night. Now, a lot of reef fish do that, but parrotfish go one step further: they cover themselves in mucus. While they’re bedding down in that crevice, they produce a big smelly bed of mucus, and they completely coat themselves in it, presumably to make themselves imperceptible to sharks and other predators. In the morning they wriggle out of their own booger bed, their colours brighten up and they’re ready to face the day.

Parrotfish are amazing, and like so many reef animals, they are under threat from climate change—it’s bleaching their corals and acidifying their water. In fact, entire islands like the beautiful and sacred Mystery Island will disappear as ocean levels rise.

There are so many simple ways to reduce your carbon footprint; I probably don’t have to enumerate them for you. For instance, you could turn off your computer right now, and go for a walk someplace a little bit wild. Or maybe go for a swim in your local coral reef, if you’re lucky enough to live near one.

Say hi to the parrotfish for me.

(Have a look at the video, and listen to him crunching the coral at 0:26.) 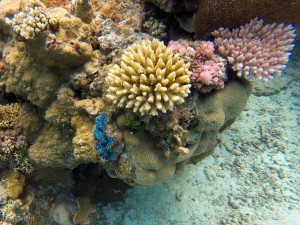 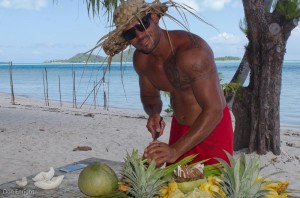 The Boundless Beauty of Bora Bora