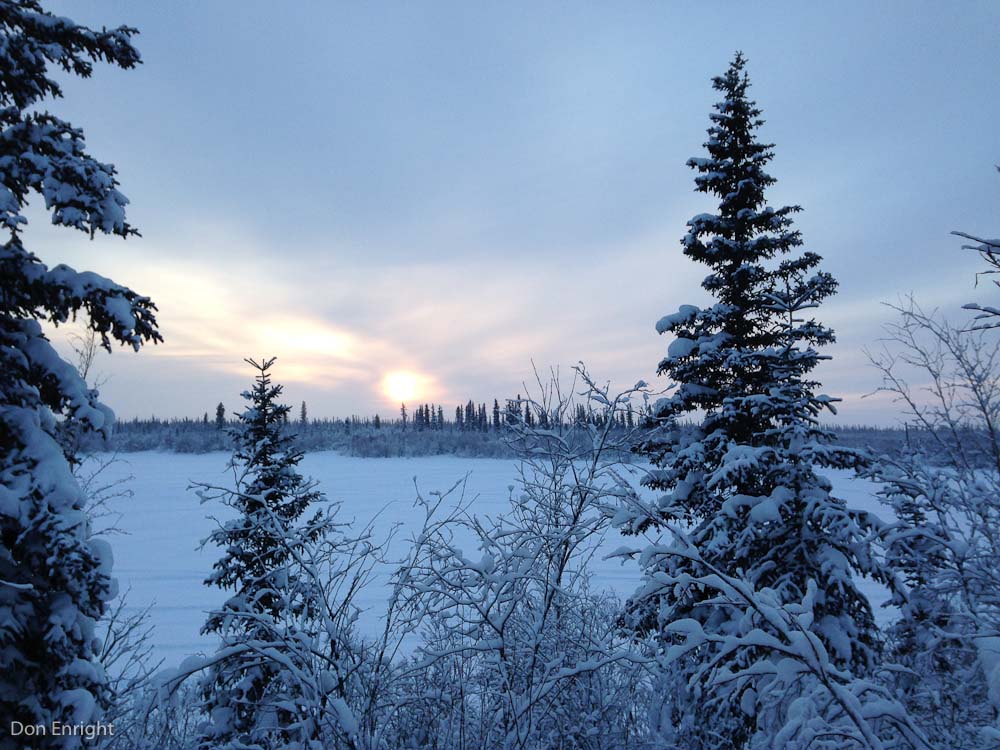 In which your intrepid blogger nearly freezes to death in a ditch not a stone’s throw from Inuvik.

This week, I am in Inuvik in the Northwest Territories, and it is glorious. All my life I have dreamed of seeing Canada’s north. A few weeks ago, an opportunity to travel here as part of my day job presented itself and I jumped on it. No matter that it is still the dead of winter, and we are well above the Arctic circle. It is everything I expected and more.

This afternoon, after a very enjoyable day of workshops, I was pretty excited to have some daylight left and clear blue skies outside. One of the locals suggested a walking trail just on the edge of town, and two colleagues and I decided to head out and work up a bit of an appetite before dinner. Off we went, over the crunchy Inuvik snow.

All three of us were from out of town, though my friends had spent a fair bit of time here in previous years. I quizzed them as we walked, about the history of the place, the landscape, the river, and what it must all look like in summer. The MacKenzie Delta is astonishingly rich in bird life during the short breeding season, and I tried to picture the flocks of shorebirds migrating along this now-frozen waterway.

After a bit, we got to an intersection in the trail and my friends decided it was getting a little too cold to continue. (My friends are from Winnipeg, mind you. Too cold for them is really too freaking cold.) But I wanted to keep exploring this fantastic landscape, and was actually feeling pretty toasty. We made arrangements to meet up for dinner and parted ways.

Onward I forged by myself,  cozy in my winter gear and smug at having outlasted the Winnipegers. We Vancouverites are not known for our winter toughness, God knows. But ever since my aventure at last year’s Carnaval de Quebec, I have resolved to take the Canadian winter by the ‘nads. To wit, I have purchased myself some of the finest cold-weather brands money can buy. On my body at that moment were five layers of Helly Hanson, Arcteryx, MEC, North Face, Patagonia, and a single layer of Stanfields just to keep it real. You could have mugged me and opened your own winter outfitter right there on MacKenzie Road.

The walk, I have to say, was absolutely stunning. The sun was slowly setting over the mighty river, and as I stopped to photograph it, I heard the whispered calling of a gray jay somewhere in the birch trees in front of me. There was no other sound  but for the occasional truck speeding along the ice highway in the distance.

Onward I walked through the -30C degree temperatures, exhilarated, energized, feeling connected to this wondrous new land. The path was made of hard-packed snow and made for quick and easy going. Until…

I got to a point where my map indicated I needed to veer off back into town. I could have stayed on the main path and made a much longer loop of it, but the sun was going down and I knew my friends were waiting for me. So off I marched onto the new fork, and soon discovered this leg had not been traveled recently. The snow was deep and I had trouble staying on top of it, and kept breaking through almost to my waist. Some of the bog birch had been bent across the trail by the fresh snow and I had to scramble over or under it.

It’s surprising how quickly you tire in deep snow. I kept checking my GPS, and it reassured me I didn’t have far to go. (Here’s a pro tip: your iPhone 5 works well at -30 for about five minutes, and then it abandons you. It just powers off. Keep it next to your body and it’ll be fine.) But as I dropped through the snow for the umpteenth time, alone in the Arctic at -30 with the sun going down, it occurred to me that I was on my way to becoming one of those quintessentially Canadian stories you read about where they find the guy frozen stiff not 50 meters from town. I reflected on this image at length and found it surprisingly motivating. Onward I schlepped until at last I found myself at the forest’s edge, looking at the highway. Yes!

Except the highway was above me, at the top of a fairly steep embankment that at any other time of year would have been an easy scramble. But the snow had drifted in on it, and again I couldn’t find any surface that would hold me. So close, and yet so far. More schlepping, more sinking, more inching along. The only really dodgy moment was crossing what must have been a creek bed, where my feet were dropping down between numerous potentially tibia-snapping boulders.

I was becoming really quite tired of the whole exercise when I heard a vehicle stop overhead on the road. I looked up and there stood a Mountie. For real. I had to laugh to myself. My own personal Sergeant Renfrew. I confess I was glad to see the man.

Him: “Um, are you ok?” Me: “Oh yeah, just out for a little walk.” Except my face was now frozen solid and it came out, “Ohyajushouferliwagg.” Excellent, Don.

Him: “Well, you need a ride somewhere?”  Me (still sounding like I was suffering a stroke): “Actually, you know, I just need to get from where I’m standing to where you’re standing.”

So he kindly waited until I was up on terra firma with him. He was polite enough not to laugh at my graceless thrashing in the snow, nor to ask me what the HELL I was thinking wandering about alone at sunset in that weather. I thanked him profusely for his time and we went our separate ways.

I made a little discovery about myself, about three-quarters of the way through that adventure. I’ve always had this cherished belief that I was a hard-core outdoorsman at heart. And truly, in my younger days, I did spend a fair bit of time in the wilderness in some pretty cool situations. But now I need to acknowledge that those days are behind me. My risk tolerance evaporated somewhere after my 40th birthday. It’s gone. My steely nerve and lust for adventure now reside in the same part of the universe that houses my jet-black hair and 32-inch waistline. It’s time to say goodbye.

I have been getting older for some time now. Today, I think I got a little bit wiser at last. Stay safe out there, my friends.