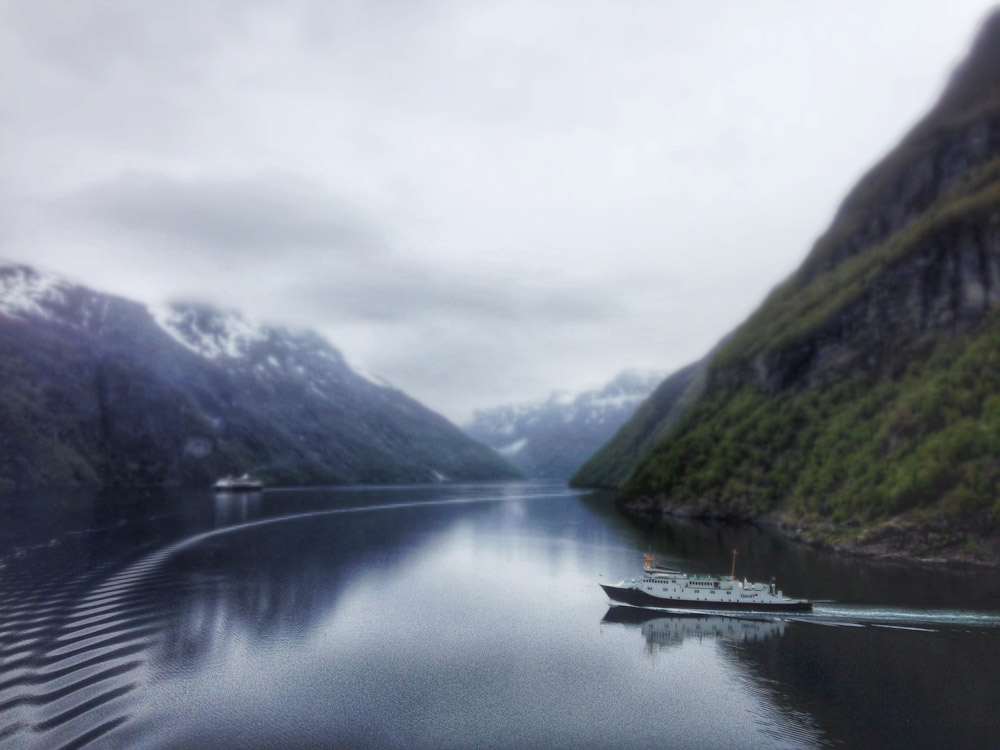 This world heritage site in western Norway just may be the most beautiful fjord in the world.

The first time I cruised around Norway as a ship’s naturalist, I was asked to get on the ship’s PA system and give a narration about the fjords. Great! So up to the bridge I went, only to discover that there, um, weren’t any fjords out there. It was a bit awkward. Not any fjords as I knew them, anyway. Fjord is a funny word; it means something very specific in English, but its meaning is much broader in the Scandinavian languages. What you or I would call a strait, a channel, a passage, an inlet, a sound, or a fjord, the Norwegians would all throw into that last category. I wanted to take them aside and point out their linguistic mistakes, but then again, it’s their word. We just borrowed it.

So you can imagine my delight in finally visiting the world-famous Geirangerfjord (sounds a bit like guy-rang-grr) and discovering that it is indeed a classic long, narrow, steep, dead-end fjord. In fact, this UNESCO world heritage site just may be the most beautiful fjord of them all.

Geirangerfjord was carved out of the mountains of what is now western Norway during the last ice age, sometime between 2.5 million and ten thousand years ago (a mere blink of an eye in geological terms.) All of Norway, in fact, seems to have been heavily glaciated; the entire rugged landscape looks shaved off and rounded by the immense, deep ice fields that passed through. In this part of the country, the glaciers descended from the high country westward toward the sea, filling the valleys and widening them into the broad, beautiful, U-shaped valleys that remain today. Where a glacial valley hits sea level, you have a fjord. And sailing up them to the tiny, picture-perfect villages that sit at their headlands is one of the finest pleasures you can have at sea.

One of the things that strikes you as you travel the fjords is their isolation. Back in the time of the Vikings, the steep, lonely terrain meant that there was very little to do but travel outward in search of trade and adventure. Norway’s fjords produced up to 20 different mini-kingdoms, where Denmark’s gentler terrain fostered more social consolidation. And right up until the late 20th century, those who chose to farm the fjord lands had tremendous challenges in getting their children to school and buying provisions, among other things. Fortunately, the Norwegians struck it rich in the 1960’s, and their tremendous petroleum wealth has allowed them to invest heavily in road and ferry infrastructure. There are now some amazing tunnels connecting the fjords, and beautiful wide highways in places you would never imagine them. The Norwegians certainly don’t hesitate to spend money when they need to.

The village of Geiranger, at the head of the fjord, is really far too small to support the incredible number of cruise ship passengers who descend upon it all summer long, but they do their best. A number of very beautiful walking trails radiate from the steep little village, and upon arriving we made our way through the pastoral country side in search of birds and photo opportunities. We ended up in someone’s pasture, greeted by a mixed flock of sheep and goats who seemed particularly excited to see us. We walked and photographed the day away, up and down the steep, rocky trails, before making our way back to the ship for the sail-away.

A great highlight of Geirangerfjord is a steep, lace-like waterfall called the Seven Sisters. I have seen them now at different times of year, and if you get there too early in the spring, before the runoff starts, there’s not much to see: maybe two and a half sisters and their dwarf cousin. But this week they were in their full splendour, and on our way out of the fjord, our cocky captain stopped the ship to spin 360 degrees in front of the falls as everyone gasped and applauded. It was a stunning finale to a visit to one of the world’s most beautiful northern landscapes. 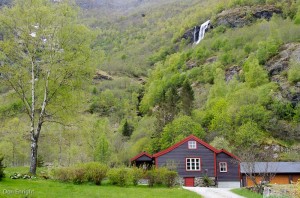 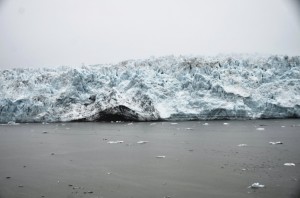