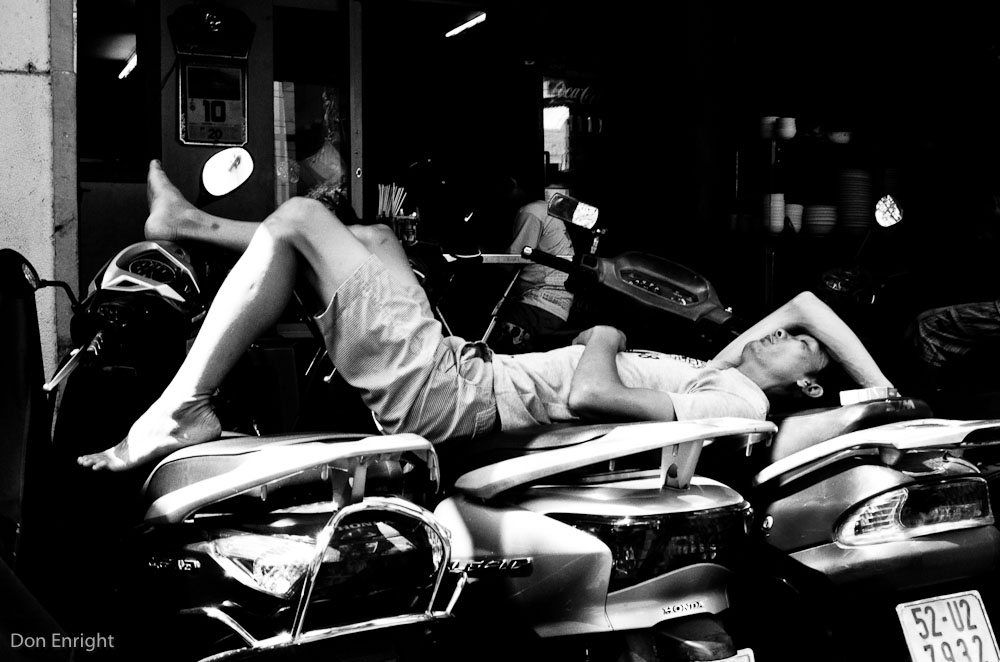 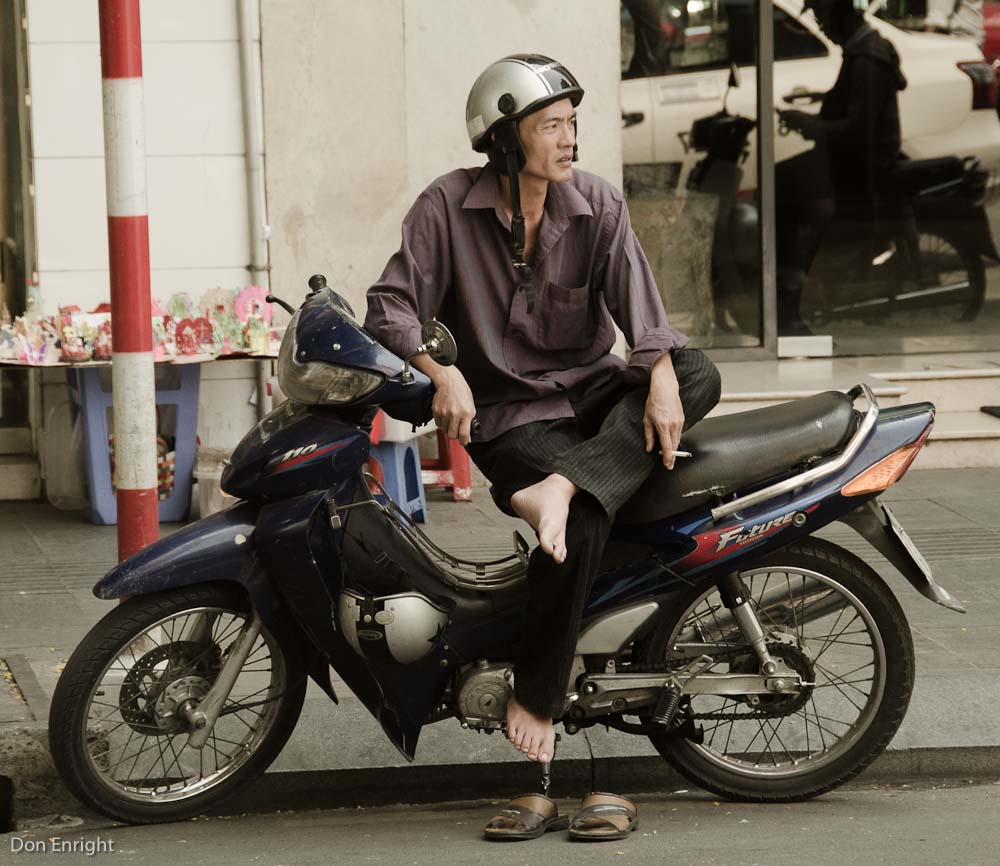 To walk through Saigon is to feel large, white and sodden.

In the months to come, when I look back on this once-in-a-lifetime Asian adventure, I’m going to kick myself. I’m doing it already: “Why aren’t you getting more done? Why aren’t you seeing more? You’ll never be back here again.”

I’m one of those travellers who likes to cover a lot of ground. In Europe, my partner Tom and I are virtually indefatigable. We walk for miles in search of the perfect photograph (or cup of coffee), and it’s disheartening to realize that we just don’t have the strength to do so here. It’s the heat. It’s brutal, and we haven’t been doing very well with it. It’s all the more disheartening when you realize that millions and millions of people work hard in this sweltering climate and have been doing so for centuries. What’s my excuse? 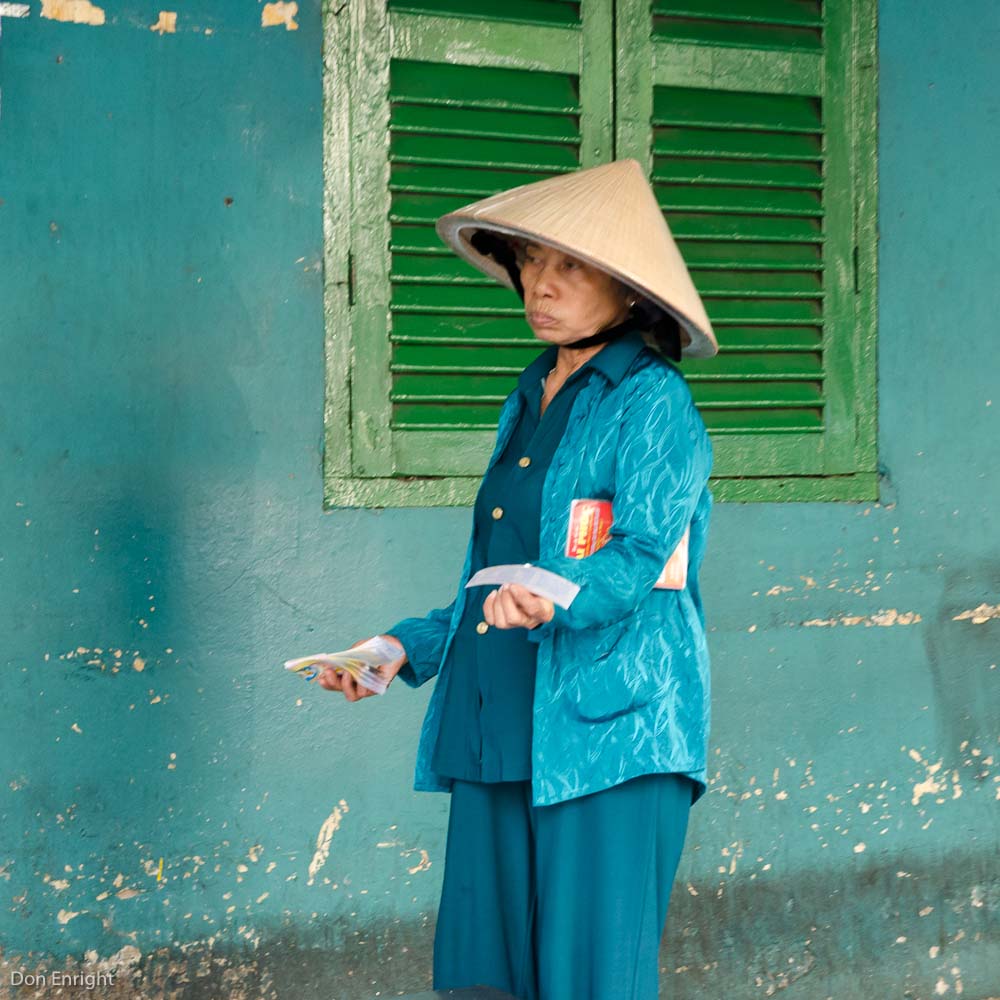 “Oh the local people don’t FEEL the heat the way we do,” you sometimes hear. But I’ve always resisted making those assumptions; humans are humans, after all, and any assertion that some of us suffer from the heat less than others can lead down all kinds of unpleasant racist/classist paths (“Oh they’re FINE out working in the fields…”)

A walk down Avenue Louis Pasteur in Ho Chi Minh City is enough to dispel that particular myth anyway. It’s 35 degrees out (“Feels like 37!” according to my cheerful weather app) and the humidity is Amazonian. It is too darn hot, as the song says, and everybody is visibly suffering.

Manual labourers take a break from the blazing sun, sitting on the shaded sidewalk drinking cold green tea or sugar cane juice. A few of the men have rolled up their shirts, exposing their midriffs Spice Girls-style, which looks odd but seems to be the socially acceptable way of cooling down in the city. All the street-side stalls are open for business. One proprietor has got himself an old electric fan and is draped in front of it, his arms wrapped around it protectively: nothing on earth will separate him from that sweet breeze at this moment. A police officer sits at a street corner, slowly fanning himself with a red silk fan like some Southern belle. First I remark how funny he looks… then I start to wonder how much he’d want for it. 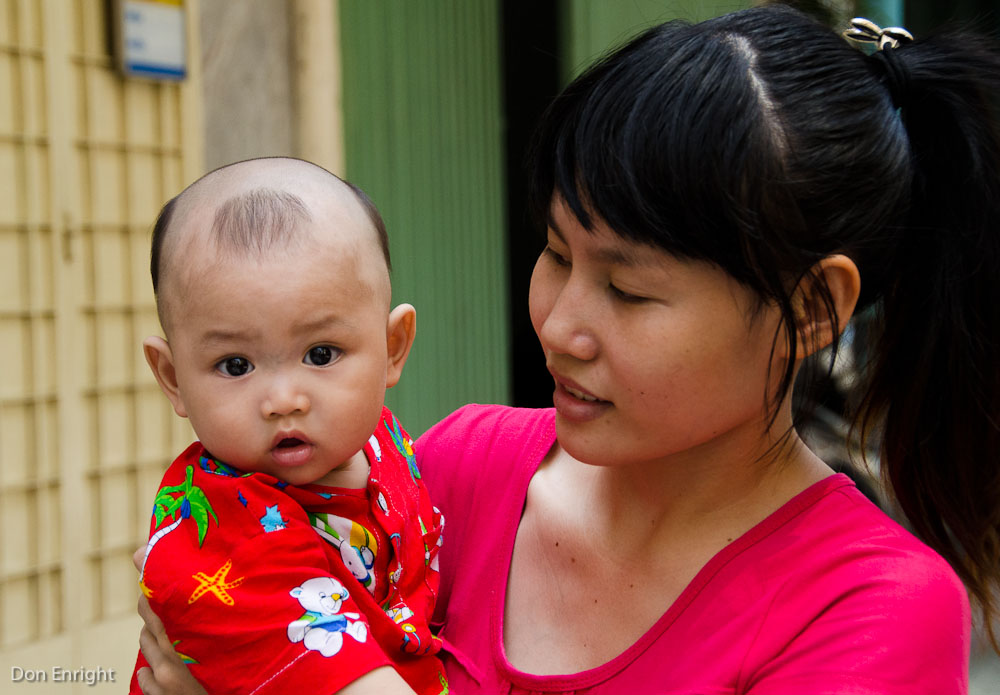 Security guards stand bravely outside their buildings, dressed in black… and I notice something that challenges my noble assumptions about heat and nationality. They’re not really sweating. Nobody is covered in perspiration the way I am. Sure, they have a bit of a glow about them. But why are Tom and I drenched in it? Why do we seem to be the only ones? It’s embarrassing. Within fifteen minutes of leaving an air-conditioned space, I am drenched. To walk through Saigon is to feel large, white, and sodden. I briefly toyed with the idea of having a bespoke shirt or suit done, but trying on new fabric in this condition is out of the question. 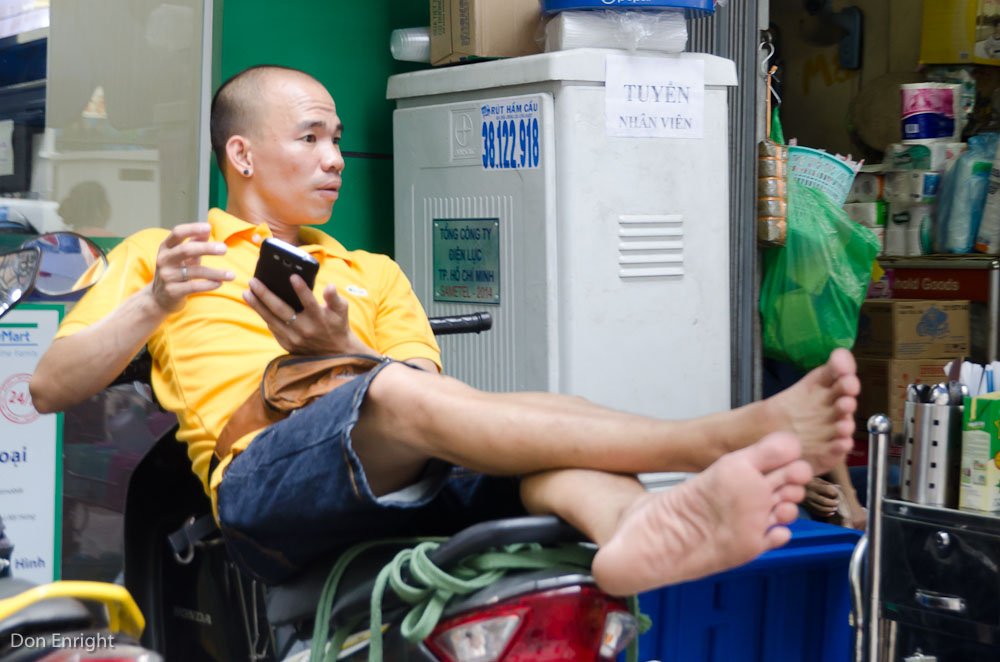 Why aren’t they soaking wet? Yes, they are accustomed to the heat, but at this point I feel I am too. In the last six months we’ve had maybe two or three days that were under 28 degrees. I have increased my stamina and increased my knowledge of when to drink water and how much to drink… yet still I sweat, disgustingly. 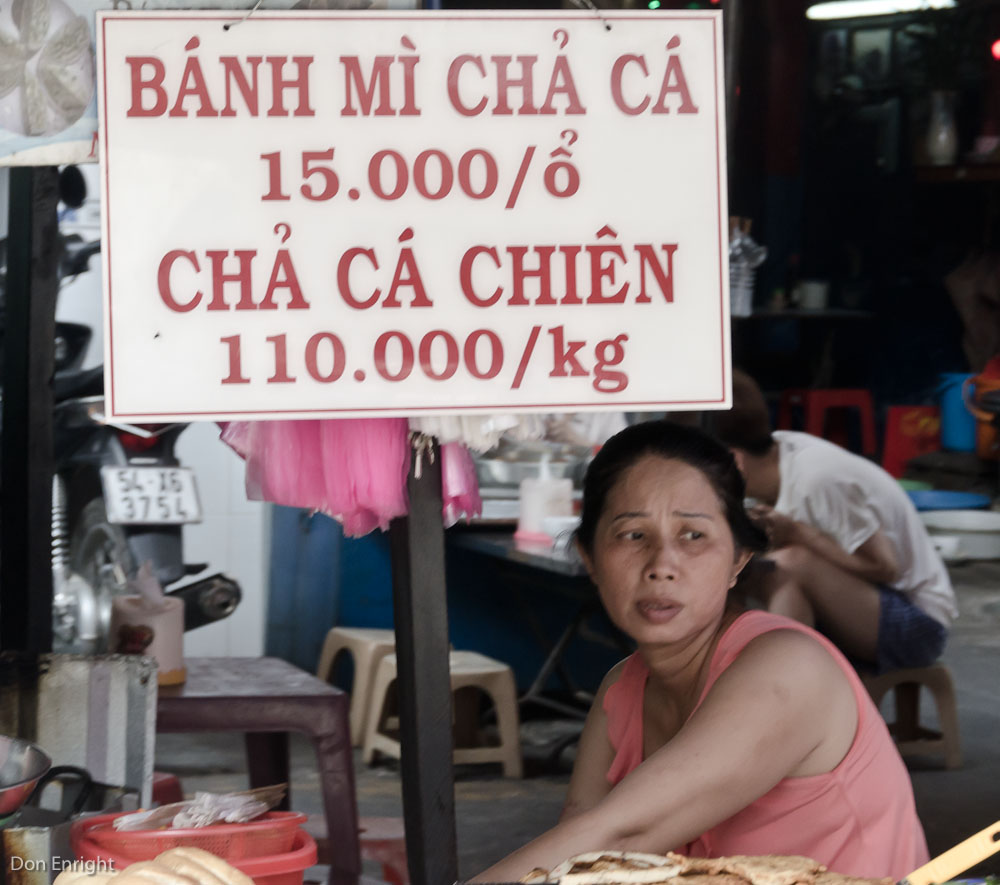 We continue our walk through the markets of the city. People recline on tiny plastic chairs, they cower in doorways, they lounge on their parked motorcycles. That last habit is particular to Vietnam: once you’ve parked your scooter in the shade, it becomes your little home-away-from-home, and you learn to perch on it eating your pho, or sit on it watching the world go by, or lie back on it, apparently fully relaxed, taking a bit of a snooze in the heat of day. It’s quite a skill, from the looks of it. 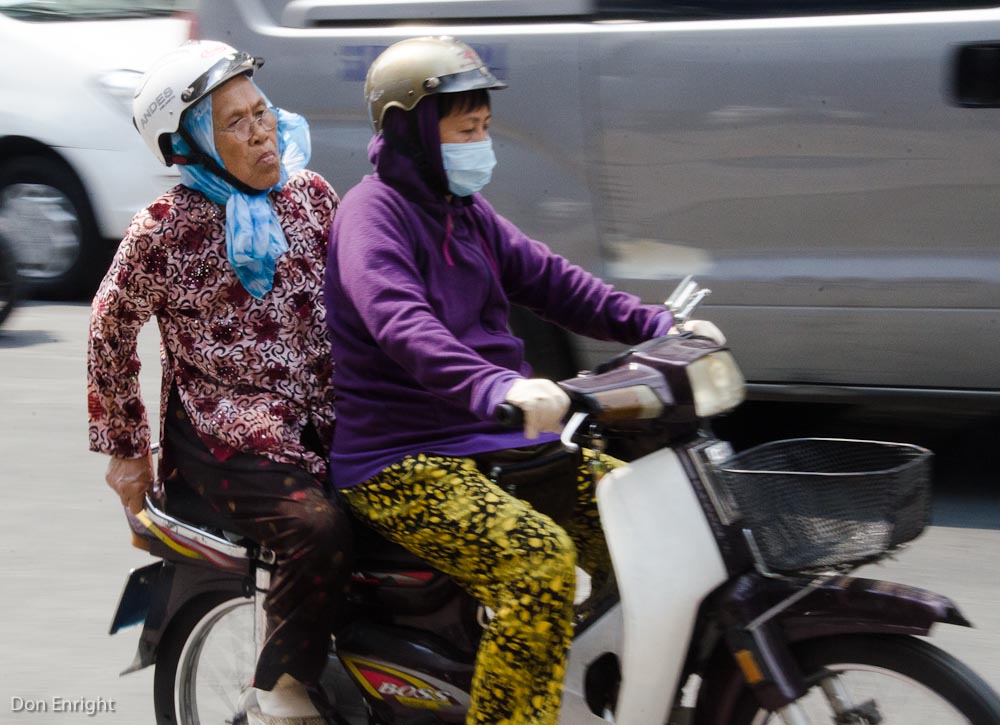 Maybe that’s why we don’t see them sweating: they learn to slow down in the heat. They get things done in the shade wherever they can, while we visitors soldier onward block after block through the blazing sunlight, trying to make that one last destination on our one last day in the city. Mad dogs and Englishmen, they say.

Goals: The Definition of Success