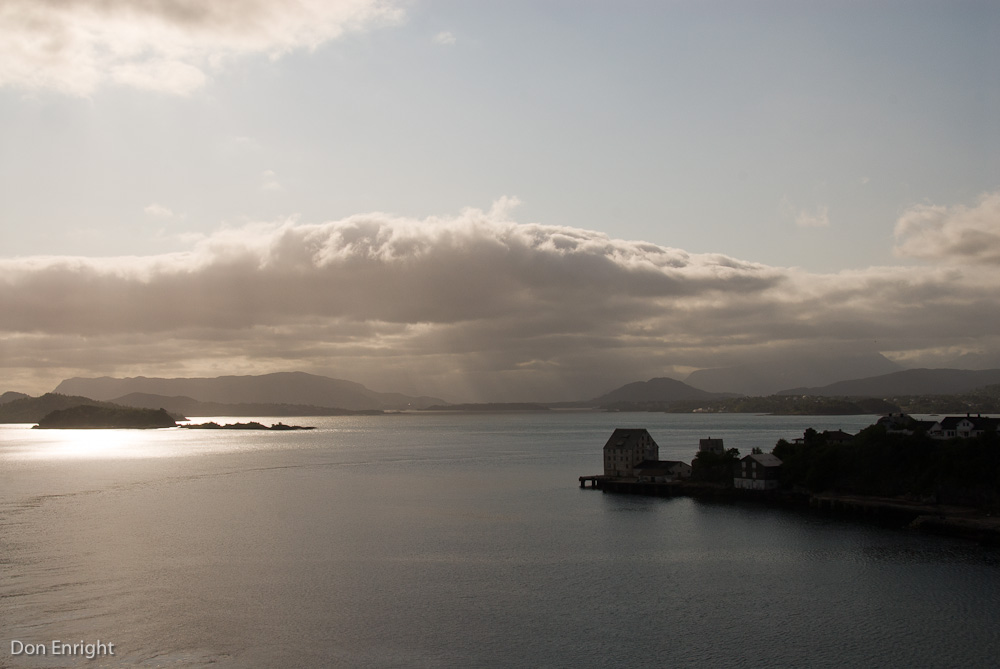 A visit with the kittiwakes of Ålesund, Norway.

Any travel guidebook will tell you that a visit to beautiful Ålesund is all about the architecture. And I suppose they’re right; it is quite something. This town on the outer Norwegian coast has a legitimate claim to fame in its buildings: in 1904, most of Ålesund burned to the ground. Fortunately for the townspeople, Kaiser Wilhelm of Germany was fond of the place; he liked to vacation there. So Willy helped support the reconstruction, which was all done in the style of the day: beautiful Jugendstil, better to known to you and me as Art Nouveau. The result is spectacular. I really think it’s a shame that Art Nouveau prevailed for such a short period. It’s gorgeous.

But the first time I visited Ålesund, while drooling over the toothsome detail in the building facades, I couldn’t help but notice the big muddy nests stuck to the foundations of the buildings over the inner harbour. Finally I found their source: the black-legged kittiwake (or just kittiwake in Europe; it’s the only variety there). Sweet! It was a lifer for me (a new bird for my life list), and I was glad to tick it off. But then it occurred to me that I really didn’t know a thing about this sea bird. I decided to get a little closer and see what I could learn.

Kittiwakes are gulls. In fact, they look exactly like any other gull you might find in your average Walmart parking lot. Except that you wouldn’t. They are wild things, these gulls—creatures of the sea. They live and nest exclusively by the ocean, never deigning to consort with their scavenging, inland cousins. For that reason, you may never have seen them before. Newfoundlanders know them and call them tickle aces. Or tickle asses, just to be cute. Both the Newfie moniker and their official name are onomatopoeic; they call their own name. Kit-ti-waaake, kit-ti-waaake! Or, around St. John’s, Ti-ckle-ace, ti-ckle-ace, mudder I’m stuck. (OK I just threw in that last part.)

Aside from their decidedly non-gull-like call, there are a few other things that set kittiwakes apart from their more vulgar kin. Most of these traits are related to their colonial lifestyle. True, a lot of gulls nest in colonies; there’s always safety in numbers. But kittiwakes are cliff-nesters, not flat-ground birds. They find the most precarious rocky perches, places where you might expect puffins or razorbills, and they make them their own by the thousands.

Here in Ålesund, the kittiwakes have claimed a cliff right at the edge of town, and it seems to be working pretty well for them. So much so, in fact, that they’ve used up all the prime cliff-side real estate and are spilling out onto less-traditional habitat, like bridges, warehouses and the foundations of tasteful art-nouveau buildings. That’s where we came across them. We’d toured the beautiful streets and spent time with the locals in one of the coffee shops (where we learned to pronounce Ålesund properly; it sounds a lot like Olsen), and were wandering further afield looking for more birds. We found a white steel-frame bridge on the edge of town that has become kittiwake central. It’s near the cliffside colony, and I suspect that these bridge-nesting birds are younger or lower-status types who don’t have access to the really prime real estate. The bridge is far from ideal, really; it’s noisy and within reach of rats, or people who can almost reach out and touch them where they nest. But it’s perfect for photographers, and we took advantage of their proximity. We were close enough, in fact, to see some pretty cool behaviours. They danced for us.

I should explain. You see, nesting on a rocky cliff means you need to provide a decent padded nest for the wee ones; the usual crappy little scrape of gravel that most gulls make just won’t keep the eggs from rolling off. So kittiwakes diligently collect mud from their surroundings and stick it to their nest sites, like swallows. Once they’ve got some mud there, they fetch sphagnum moss and other padding, and stick it to the mud. And then they dance, stamping quickly back and forth, back and forth. It looks like they’re doing a little victory dance to celebrate their hard work. In fact they’re padding down the moss into the mud and making sure it sticks. They’re obsessive about it. A little mud, a little moss, a whole lot of dancing. They can’t help it; it’s a compulsion. They get so excited about it they’ll sometimes wander off the nest onto pure granite or asphalt and stamp it for a while, just on principle. All of this is accompanied by a great deal of squawking and squabbling with the neighbours. Nesting season is intense.

Once the nests are built and the stamp-dancing is done, they set down to work incubating the eggs. Kittiwake eggs are white in colour while other gulls have mottled, highly-camouflaged eggs. Who needs camouflage when you have steep cliffs?  And once the fluffy babies hatch, they’re a bit different, too. For starters, they’re nearly white, like the eggs. And these babies stay put. Other baby gulls, shortly after hatching, start to wander around the immediate neighbourhood, learning to pick bugs and things from their surroundings. But that behaviour wouldn’t work out so well for kittiwakes, with the inconvenient sheer drop into the rocky sea, so their babies have a very strong stay-put instinct.

Once the babies learn to fly, they’re easy to spot from a distance. Young kittiwakes have a beautiful black zig-zag pattern across the wings that sets them apart from other gulls, and they conveniently keep that plumage until their second year, making them easy to identify from a distance.

I look forward to my next visit to Ålesund. Beautiful architecture, strong coffee, and amazing seabirds right in town. It’s my kind of place. 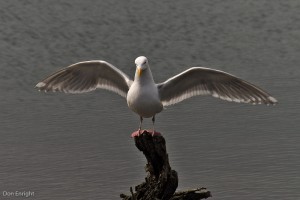 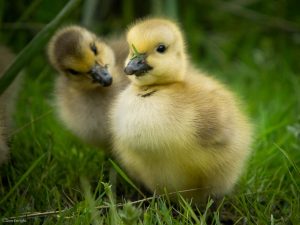