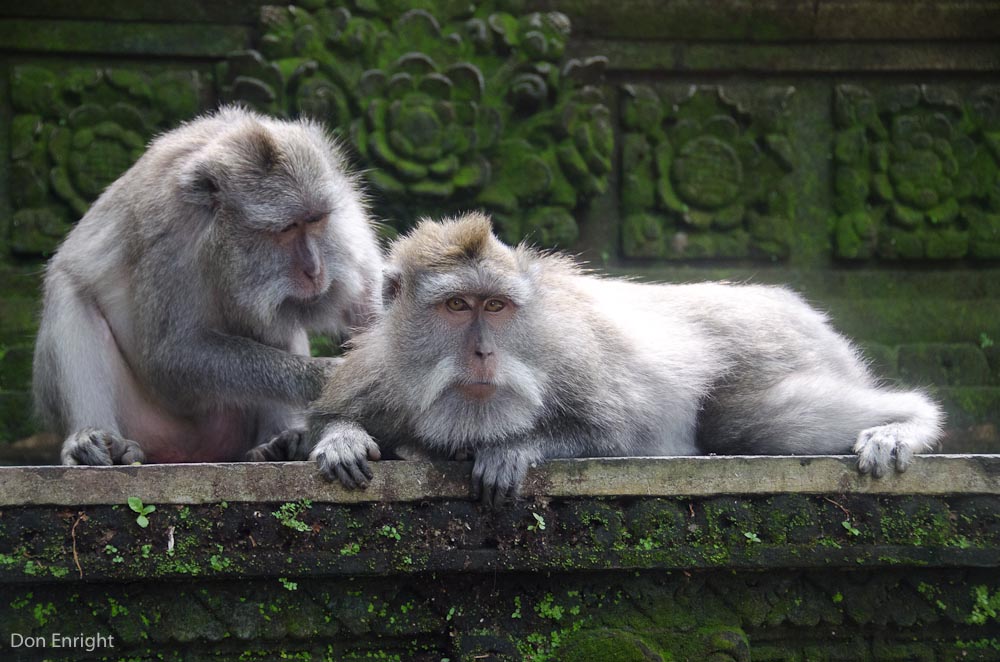 Behind that adorable exterior lie some potentially nasty surprises. 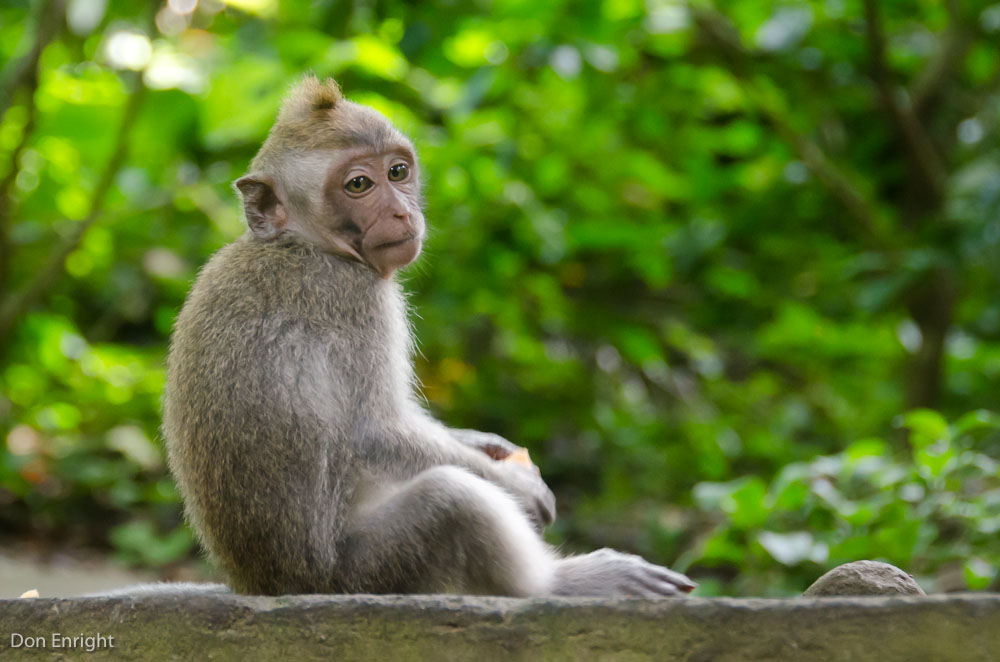 This week, I left beautiful Australia behind and began my journey to southeast Asia. Our first port of call in the exotic East was Bali, and it was everything I imagined it might be. What a creative, expressive people the Balinese are. On every street corner is a sculpture, a shrine, a temple. Everything—every available square inch—is ornately, delicately, beautifully decorated. It’s a pretty intense place.

Bali is a Hindu culture in contrast to the rest of Indonesia, which is predominantly Muslim. And in Hindu tradition, among the many religious icons you see everywhere, monkeys are a particularly revered symbol; they’re living manifestations of Hanuman, the demigod hero of the Ramayana who rescued Lord Rama’s kidnapped bride with his army of warrior monkeys. 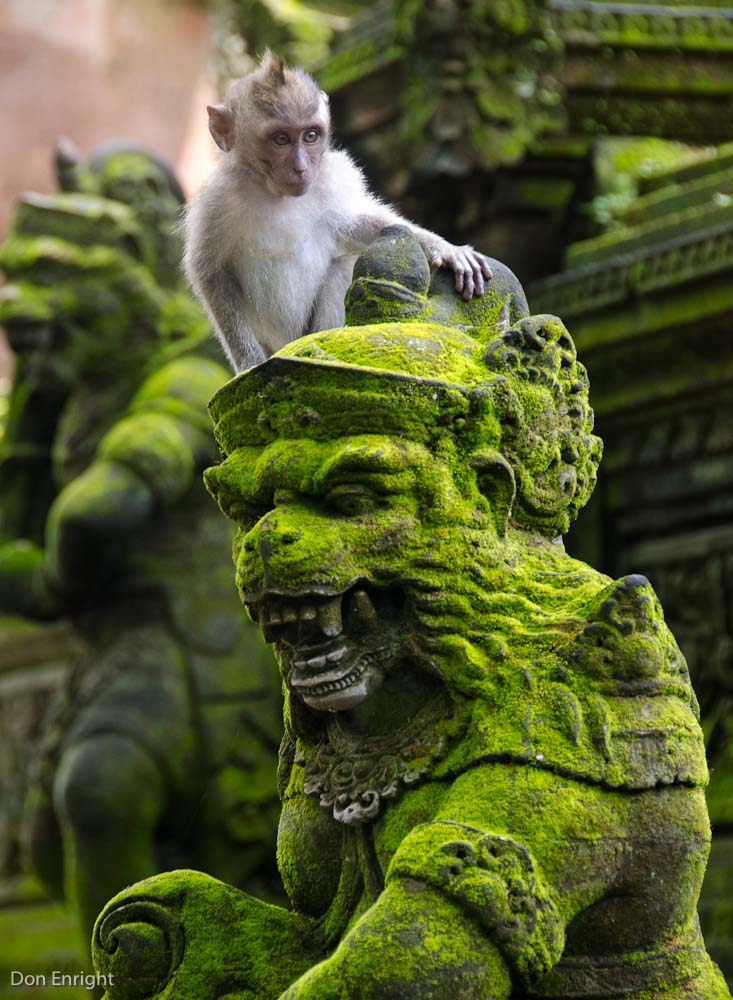 In the town of Ubud, that reverence translates into an exquisitely beautiful 10-hectare monkey forest, filled with giant banyans, moss-covered sculptures, tranquil winding walkways, and a glorious ornate temple at the centre. And everywhere in the forest—in fact everywhere within several blocks of the forest, hanging from rooftops, hiding under cars, lounging in shop doorways—is the long-tailed macaque, a small, agile, sinewy version of the familiar macaques of Japan and Gibraltar. 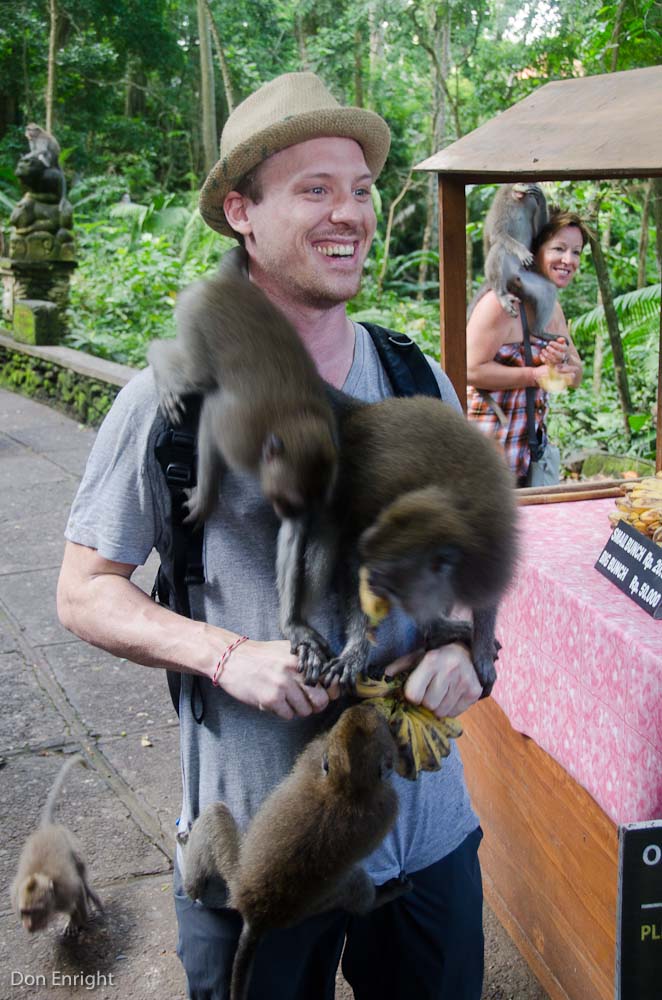 And they’re very, very good at it. In India, Delhi’s macaque population is out of control: they’ve taken to invading households, tearing out wiring, ripping apart gardens and in a few tragic cases chasing people off balconies and terraces to their deaths.

In Ubud, things are a little more relaxed. Monkeys lounge along walkways, wrestle with each other atop 14th-century statues, and slyly reach out to grab purses, knapsacks and camera bags from unsuspecting passers by. The hungry ones climb atop visitors three and four at a time, lured in by the promise of a banana or two. It’s all fairly adorable, at first glance. 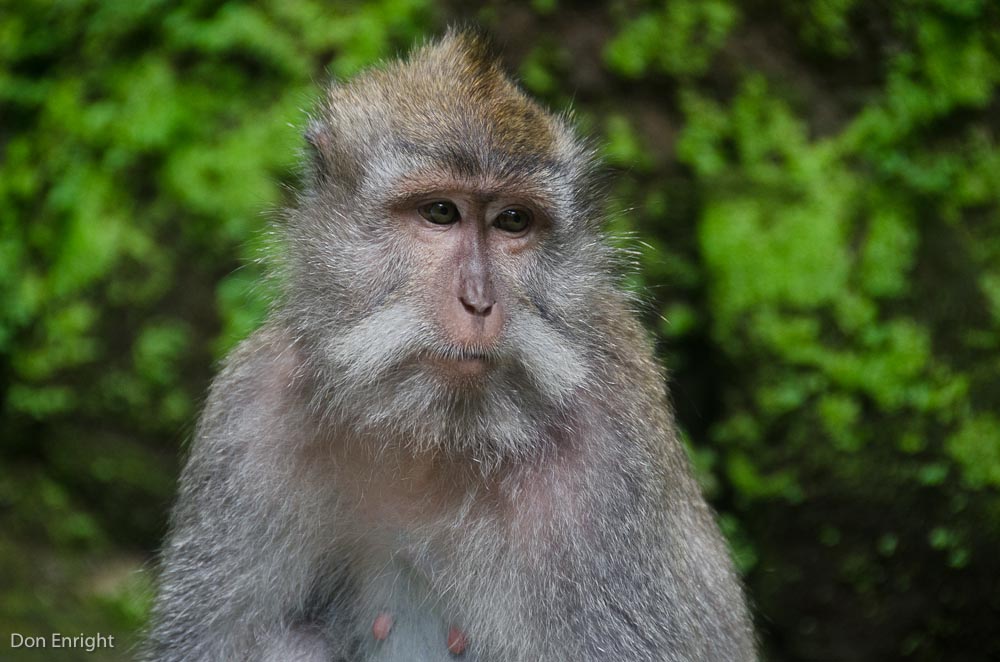 But the sinister side to all that physical contact is the very real risk of disease transmission.

When I worked at the Calgary Zoo, the veterinary staff took more precautions around the macaques than around just about any other kind of critter. The reason? A herpes type B virus that causes minor infections when passed from monkey to monkey, but when transmitted to people (via a bite, or any exchange of body fluids) can result in a potentially fatal meningoencephalitis. And that would be enough to ruin your whole day. 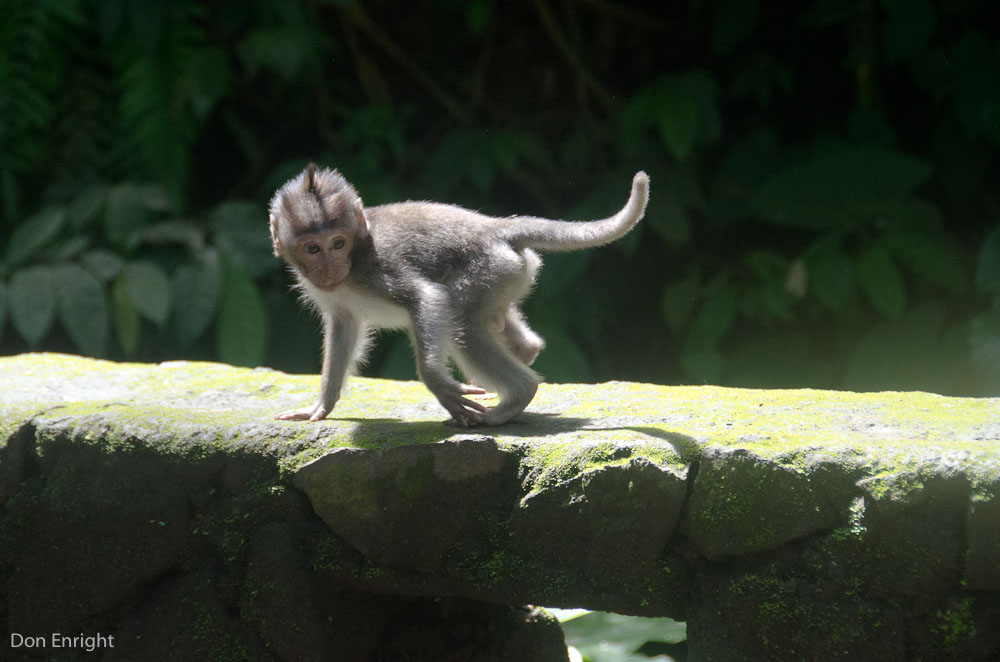 The visitors to Ubud’s monkey forest don’t seem too worried about the risk, to judge from the cheeky monkeys climbing all over them. I had resolved to keep a three-metre monkey-free zone around me at all times, but I soon discovered that the chance of a nasty encounter was actually pretty low, as long as you didn’t have any food on you. These monkeys are perceptive, and quick to size you up for your food-bearing potential. And there were plenty of naive visitors to keep them occupied.

The staff of the temple facilitate the feeding, which is a terrible idea from a public health point of view, but a pretty smart idea from an animal management one. I’m sure they’ve discovered that visitors will feed the monkeys no matter what, and by selling yams, bananas and kale, they provide the monkeys a decent diet. The staff also stick around to supervise the feeding and protect the visitors. It’s kind of a harm-reduction scenario at these feeding stations: you buy your bananas, feed the monkeys, and the staff stand by with poles to break up any ensuing melees. 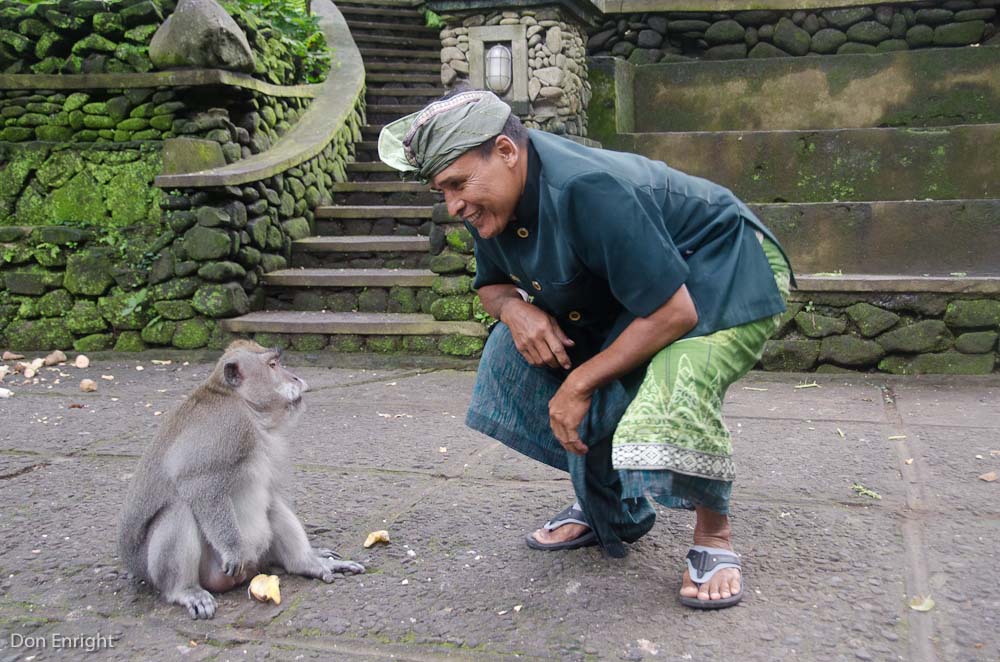 The other risky scenario is when a visitor decides that a smaller monkey deserves the banana more than a larger, dominant one. I’m sure their heart is in the right place, but it’s never a good idea to mess with pecking orders in the name of monkey social justice. The dominant animal, once again, simply attacks the person feeding, sometimes brutally. A two-month study at the monkey forest revealed 420 negative encounters between monkeys and people, a majority of them ending in bites and scratches. And the risk of infection is not theoretical here; the monkeys of Bali have tested positive for herpes B, simian foamy virus, simian retrovirus and other diseases. 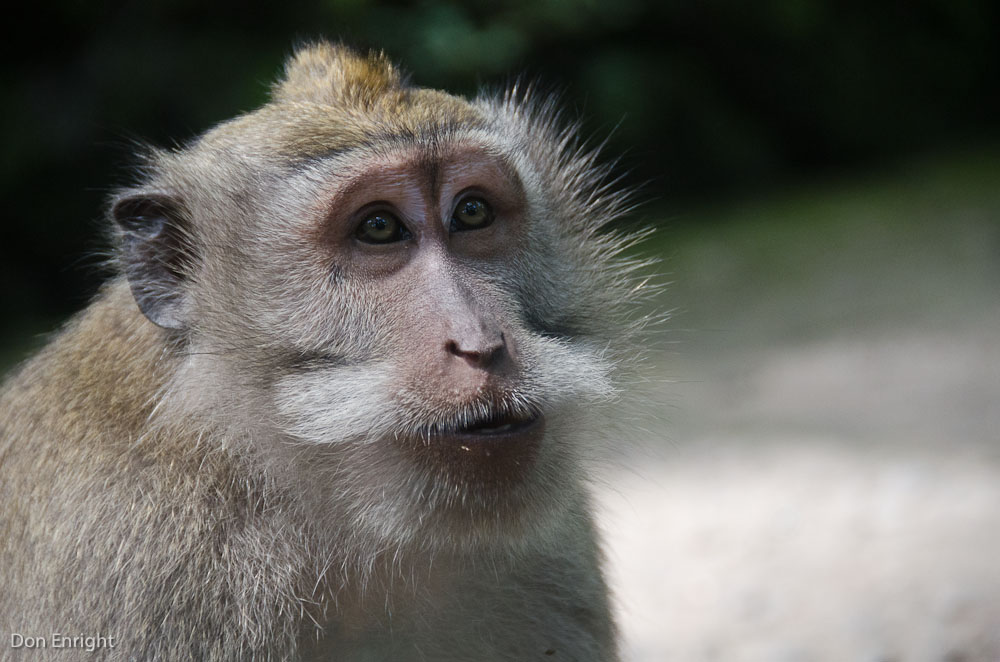 All that unpleasantness aside, I have to confess that the monkeys stole my heart. There’s a real yin and yang to a monkey, and those two sides are beautifully captured in the stone sculptures around Ubud. There’s the warrior-monkey, all muscle and sinew and bared fangs, ready to charge into battle with Hanuman. They really are a fearsome creature when they choose to be.

But then there’s the trickster-monkey, the mischievous forest acrobat, tumbling out of the trees to pull at your shoe laces or yank on your knapsack straps and charge away again: “Tag- you’re it!”

Their intelligence is obvious; their social bonds as strong as ours, and the gentle, nurturing protection that the mothers afford their wee ones is really touching. Monkeys make notoriously terrible pets, but by the end of my visit I wanted nothing more than to secret a baby away in my knapsack and make it my own. 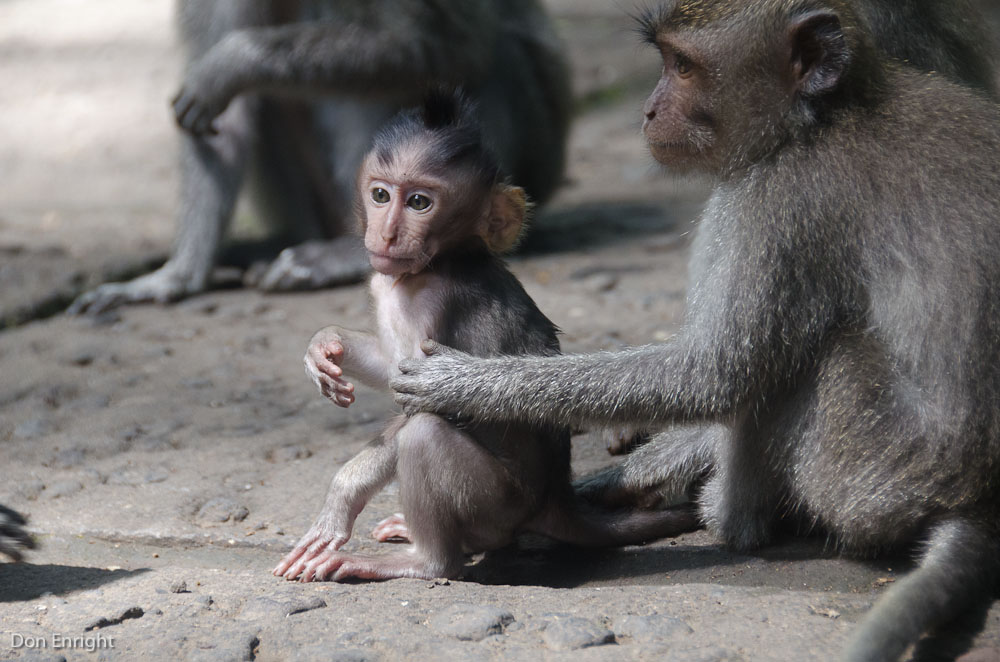 I almost had the chance, too. Despite my vigilance, and despite my determination to avoid any physical contact, I let my guard down at one point, squatting to photograph a pair. And plop! I felt the light, nimble weight of a yearling monkey landing on my back from somewhere not far away. He immediately went to work figuring out the two-zipper system on my bag, but was mercifully cooperative when I walked him over to the nearest branch and gently nudged him onto it.

I miss him already. 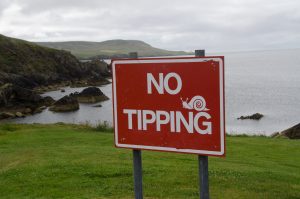 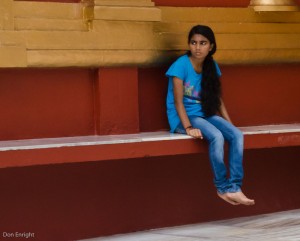