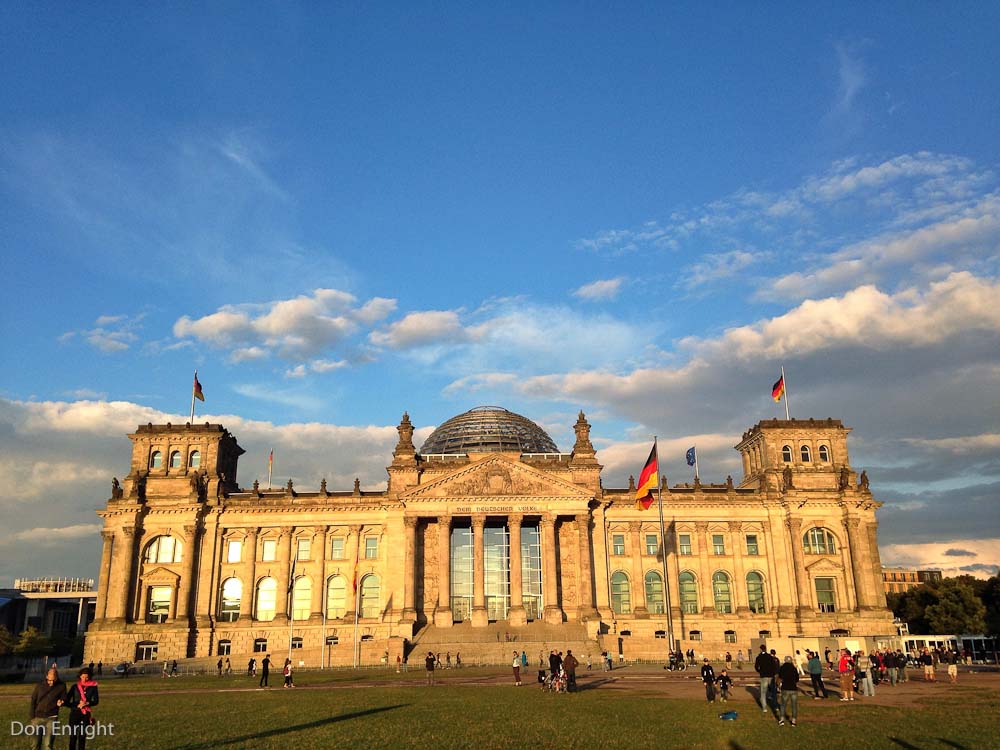 I have just spent a luxurious eight days in Berlin, in a bright and modern little apartment on Grosse Hamburgerstrasse. Not long ago, I wrote of my first trip to this remarkable town. It was 1988, the year before the wall came down, and I was thunderstruck by both the raw creative power of West Berlin, and the stark quotidian realities of the East.

For this week’s visit, as you can imagine, I was more than a little excited to see how the city has evolved in the intense two decades since reunification. I have to say that I hardly recognized the place. Here are my impressions of some of Berlin’s most celebrated current attractions, and a few photos of life in the capital of all things Teutonic. 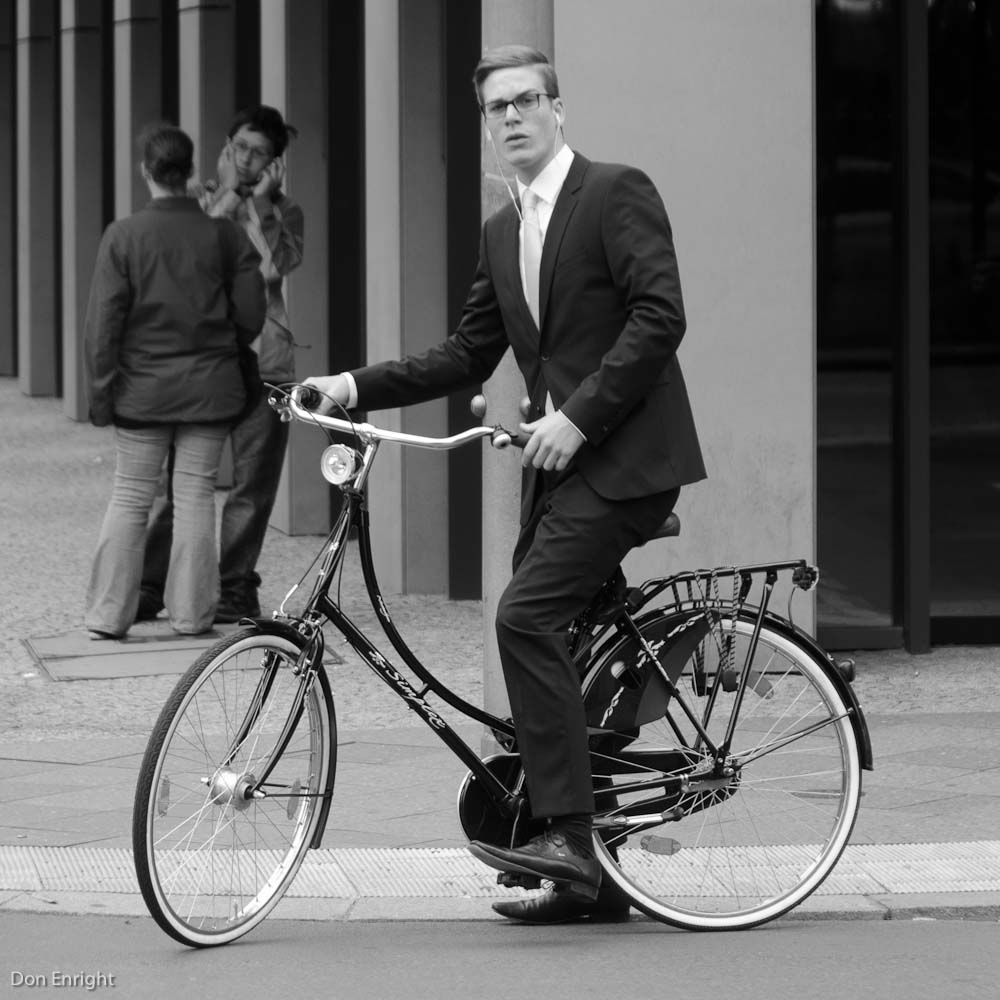 The Berlin Wall Memorial: Having crossed Checkpoint Charlie briefly back in the day, I really wanted to see how the wall was commemorated in the ultra-modern city that arose from its rubble. Walking around town, I was concerned that Berliners, in their haste to erase one of the 20th century’s great mistakes, had torn it all down without a trace. My fears were for naught. In so many historic and cultural sites around the city, the Berliners take pains to drive home the theme of confronting the past fully, in order to move forward.

This free outdoor exhibit preserves a stretch of the Berlin Wall, and augments it with memorials to those who died trying to leave the East. Text, images, and a high observation platform all do a magnificent job of explaining and evoking the era when the city (and nation) was divided. An absolute must-see, in my book.

The Holocaust Memorial was next on my list. I had read of the consultation and planning that went behind its development, and couldn’t for the life of me picture how any city, let alone the nerve centre of the Holocaust’s execution, could deal with the theme in any meaningful way. I have to say that my reaction to it was mixed. Certainly, as a piece of visual art, it is exquisite. Dozens and dozens of concrete blocks, flawlessly symmetrical in their layout, evoke images of abandoned homes, trunks of possessions left behind, tombstones of those who weren’t afforded any. As the sun moves across the slabs, shadows lengthen and contrasts deepen; for such a ostensibly static piece, it is beautifully dynamic.

I expected to see visitors and locals engaged with the piece, but was struck instead at everyone’s detachment. People (mostly tourists, it must be said) walked among the blocks, and my photographer’s eye searched in vain for anyone who appeared to be emotionally involved in the work. Of course I don’t know what people were feeling, but the only really demonstrative activity I saw was from the children who played tag there, turning it all into a fun maze. I was offended at first—“Has no one told these kids what this represents?”—but then chose to hear their laugher as a note of survival, perhaps even triumph, over the unbearable tragedy.

The DDR Museum was a highlight of the trip. This compact centre plunges the visitor into the minutiae of daily life in East Germany in the mid-20th century. It is fantastic. We were lucky to get there early; this immensely popular exhibit is crammed into far too little space, and there is so much to see and do. It is arranged thematically: recreation, household life, transportation, education, technology… I particularly enjoyed the full-sized Trabi, the ubiquitous plastic-bodied car, perhaps one of the worst vehicles of all time.

Much of the exhibit’s tone is light-hearted, bordering on sardonic—there is little nostalgia here for the life the city left behind. Particularly enjoyable are the recollections of popular jokes of the time: “What do you call a car accident with three Trabis? A tupperware party.” The mood is more somber as you walk through a generated-mist wall into an area that evokes military life, domestic espionage, and the fate of those who didn’t conform.

The Bauhaus Archive: Possibly the most influential design school of the 20th century, the Bauhaus sought to unite form, function and practicality. I was certainly aware of their industrial design and architecture; I didn’t know their work extended into textiles, photography and even theatre. The exhibit is beautifully laid out (how could it not be?) and the accompanying texts offer an effective chronology of the school from its conception to its dissolution under the Nazis. There are some really beautiful pieces: not just tube-framed chairs, but experimental photography, gorgeous appliances, sketches by Klee and Kandinsky. For anyone with an interest in design, it’s all pretty toothsome.

Our visit was marred by the centre’s security guards. The place has a no-photography policy, and the guards, overzealous and undertrained, followed us through the exhibit at every turn. I took out my iPhone to translate a word; there was a guard beside me. I rearranged my camera in my hand, another guard loomed and stared. It was really off-putting. They followed my partner from room to room until the experience was completely ruined for him; he gave up and went to sit in the lobby. We were not attempting to take pictures. We did complain to the front desk at the end.

The Jewish Museum is vast and ambitious. Its mission is broad: to describe Jewish life in Germany, and to create a meeting place. There is tremendous variety within the exhibitions;  one temporary exhibit, marking the 100th anniversary of WWI’s start, highlights the military contributions of Jewish citizens of the day—particularly poignant given the way their nation turned on them a short time later. Another installation, much later in the visit, features a robotic arm and pneumatic pen painstakingly reproducing Torah scrolls with the skill of a master scribe. Still another room features hundreds of faces cut out of steel; visitors walk around on them. The effect is unnerving.

Central to the visit is the remarkable architecture by Daniel Libeskind; the monolithic zig-zag construction influences (and sometimes overpowers) the experience throughout. The building moves the visitor along several ‘axes’: the Axis of Emigration, the Axis of Continuity, and the Axis of the Holocaust. I found it all a bit overwhelming. Some of the most moving experiences are the simplest: the Holocaust Void is an empty, cold, dark tower pierced by a beam of natural light far overhead. The only sound is that of the tower door opening and crashing shut behind you with a blood-chilling finality.

The Neuesmuseum is part of Berlin’s famous Museum Island, though it seems to be much less visited than the Pergamon and the Altemuseum. Built in the 19th century, the museum was heavily damaged in the war, and restoration wasn’t undertaken until the 1980s. Inside are all manner of historical and archaeological wonders, dating back to ancient Egypt. Nefertiti’s famous bust is the headline act, but there is so much more to see.

I don’t think I’ve ever seen a more effective marriage of architecture and exhibitry. Everything fits. Every treasure gets the prominence it deserves. Everything—each sword, each mummy, each carving— is beautiful isolated, beautifully situated, beautifully lit. It is a photographer’s field day; the only item off-limits to photographers is Neffy herself. (There’s also a brilliant bronze reproduction, with Braille captions, for the visually impaired to touch. Sadly I couldn’t photograph that one, either.) Highly, highly recommended.

The Neue Nationalgalerie is housed in an uber-fabulous piece of architecture by Mies Van der Rohe, and its mandate is to showcase 20th century art. Given that the collection is much bigger than the museum space can display, the facility rotates the works in a series of exhibitions. Currently on offer is Expansion of the Combat Zone. 1968-2000. It’s an exciting title, and promises much.

I don’t think I ever understood the term “over-curated” until I saw this exhibit. Long stretches of heavy-handed text place German art of that period in an intensely political context. It’s all very interesting, but one gets the impression that we’re really not seeing the best stuff; we’re seeing what supports the curator’s thesis. Yes, it’s all undeniably political and topical, and a few pieces are are stunning. But by and large, none of it transcends its political context; there’s nothing universal, much less beautiful, to be seen. To my eyes, anyway. There are so many other places in Europe where you can see jaw-dropping modern art. I say give this one a miss.

Berlin, Before the Wall Came Down