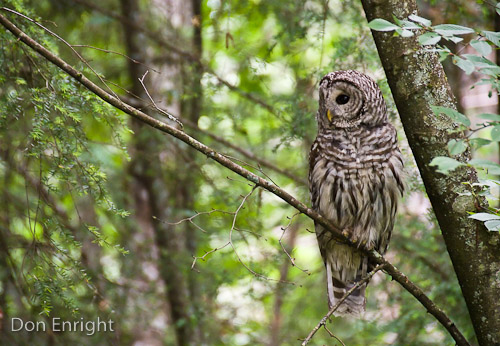 An evening encounter with a barred owl in Mill Hill Regional Park, BC

The June air was heavy and quiet as I began my search. I had seen her in the thick alder grove for a few evenings now, and tonight, telephoto lens in hand, I would try to capture her before it grew too dim. I suspected she had a nest nearby– I had heard her and her mate duetting through the springtime, and had found a number of regurgitated pellets in the area. I was determined not to get too close, for both my safety and hers; a nesting barred owl can be a force to reckon with.

I walked as quietly as I could along the trail, then stopped and looked back over my shoulder, and saw her. She had likely been watching me for some time. I slowly raised my camera, fired off a burst, and then another.

I couldn’t resist checking my shots, and I broke eye contact with her to look down. In an instant she had bridged the distance between us. I caught her out the corner of my eye, but she was within inches of my head before I could react. I felt the wind of her flight against my ears, but heard nothing. I ducked, but there was no need– she passed without extending her talons. I guess this was a friendly warning. 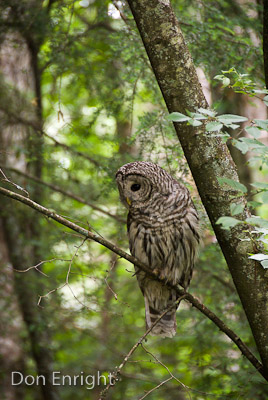 Fast, stealthy, and remarkably powerful for their size, the enigmatic owls have earned a special place in the human imagination. As a nature guide, I can tell you that few animals are as desirable an object; only eagles and whales outrank owls on the wish lists of visitors. And though the barred owl is neither as rare nor as difficult to find as some of its compatriots, I confess that I still get goosebumps when I see them, or hear their booming calls echoing through the nighttime forest.

The barred owl (Strix varia) seems like a perfect denizen of the cool forests of Canada’s west coast. And though it is spectacularly well-equipped to live among giant hemlocks and Douglas firs, the barred owl is in fact a relative newcomer to this region. Prior to the early twentieth century, this was a bird of the eastern hardwood forests, inhabiting the old-growth woods of Ontario, Quebec, and the eastern American states. For reasons not fully understood, this versatile predator began its westward push in the 1880’s, crossing the northern forests of Alberta, Saskatchewan and BC in the 1930’s and 40’s before making their way southward through coastal BC and beyond in the 1960’s and 70’s, apparently finding the second-growth forests of the coast a comfortable corollary to their old-growth homes back east.

Not that we were lacking in owl fauna before they arrived. The coastal rainforest is home to owls large and small, and the arrival of the barred owl, with its catholic feeding habits, has been fingered as a possible factor in the decline of the western screech owl, the saw-whet owl, and most problematically, the beleaguered spotted owl, possibly Canada’s rarest bird. Talk about a love-hate relationship: the barred owl both attacks and hybridizes with the spotted owl, adding one more nail to the coffin of a bird that, through its dependence on intact old-growth coastal rainforest, is now reduced to perhaps six breeding pairs in the nation.

One has to admire a bird that can eat almost anything that moves, provided it fits in its sizable mouth. Amphibians, reptiles, mice, robins, grouse, voles, even rabbits are fair game to this athletic avian that weighs in at less than a kilogram. Most active right after dusk, the barred owl relies on a classic owl arsenal of hunting adaptations. First, its light-sensitive and exceptionally large eyes (so large they can’t rotate them in their sockets) spot movement in the poorest of light. Next, down-covered wings afford practically silent flight, allowing a surprise approach while the owl’s offset ears home in on their quarry in the darkest shadows. Lastly, muscular feet and deadly talons administer the coup de grâce in a nightly ritual that fuels this non-migratory bird through the coldest of winter nights. When food is scarce, the barred owl is not above even a daytime hunt– this survivor has even been seen at the edge of streams, wading after aquatic invertebrates. 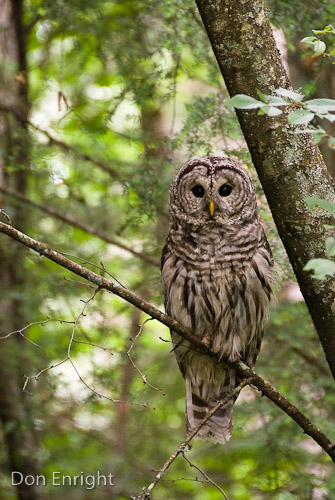 Though it takes a little luck to see a barred owl, it can be fairly easy sport to hear them. Take a walk at dusk through any of the thickly-treed parks where they live. February is a good time– these are early nesters, and the courtship begins with plenty of general calling. Whoever coined the mnemonic “Who cooks for youuu?” had it nailed perfectly, and it’s a sound you won’t soon forget. With a little more luck, you might catch some of the extended duet calling that carries on between a courting couple. I recall awakening from a deep sleep one moonless summer night, alone in my tent, to the demonic caterwauling of a barred owl pair somewhere above my head. It was terrifying, until I figured out what it was. Actually, it was terrifying even then.

They nest in tree cavities by preference, though they will settle for a stick nest left behind by hawks, crows or squirrels. They’ll even accept nest boxes, if large enough, and once they feel at home, they’re likely to re-use the same site for many years. These birds are highly sedentary; of 158 bird bands recovered in North America, none was found more than 10 km from the banding site.

And though their populations seem healthy here in the west, they do have their problems elsewhere. Barred owls in Illinois and Florida show high levels of organochlorines and PCB’s in their tissues, and deforestation in eastern forests may well have been the impetus for their westward expansion. The fragmentation of the boreal forest in recent years will likely pose new challenges.

If you’re lucky enough to have a pair nesting in your neighbourhood, try to give them their space. Less aggressive individuals may simply abandon their nests upon approach; for all their bluster and bravado, they’re probably stressed by any close human encounter. One captive owl’s blood temperature rose two degrees Celsius upon simply seeing a human.

I certainly learned my lesson with my close encounter that June evening. I cherish the photographs and I certainly cherish the memory. Next time, though, she might not be so gentle with me.