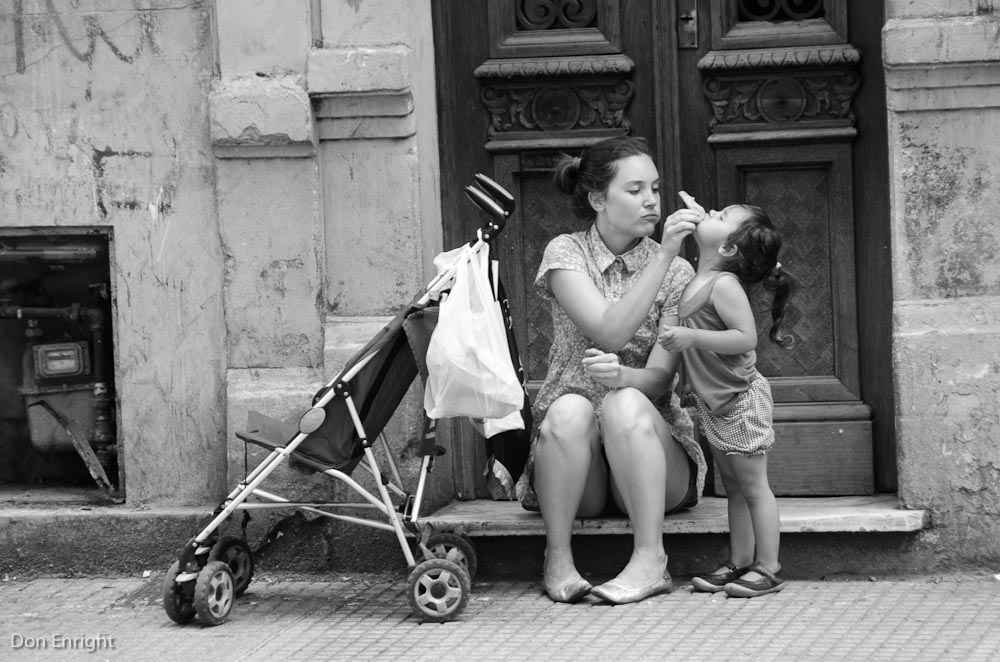 Nature and culture in one of South America’s great cities, Buenos Aires

I am a very enthusiastic walker. I take tremendous joy in getting around at my own speed, under my own power, on my own terms. And I consider myself doubly blessed to have found someone to share my travels with, who shares not only my passion for perambulation, but my lengthy inseam, too. We stride. Just try to catch us.

And so it goes without saying that, upon arriving in a new destination like Buenos Aires, Argentina, we don’t think too much about booking a tour or heading to the top Trip Advisor attraction. We just walk, and keep walking until we can walk no more, or until we feel like we have a good grasp about what the place is all about. Only once in our travels have we walked ourselves into a setting we weren’t happy with—or at least couldn’t walk easily out of again—but that’s a story for another day. 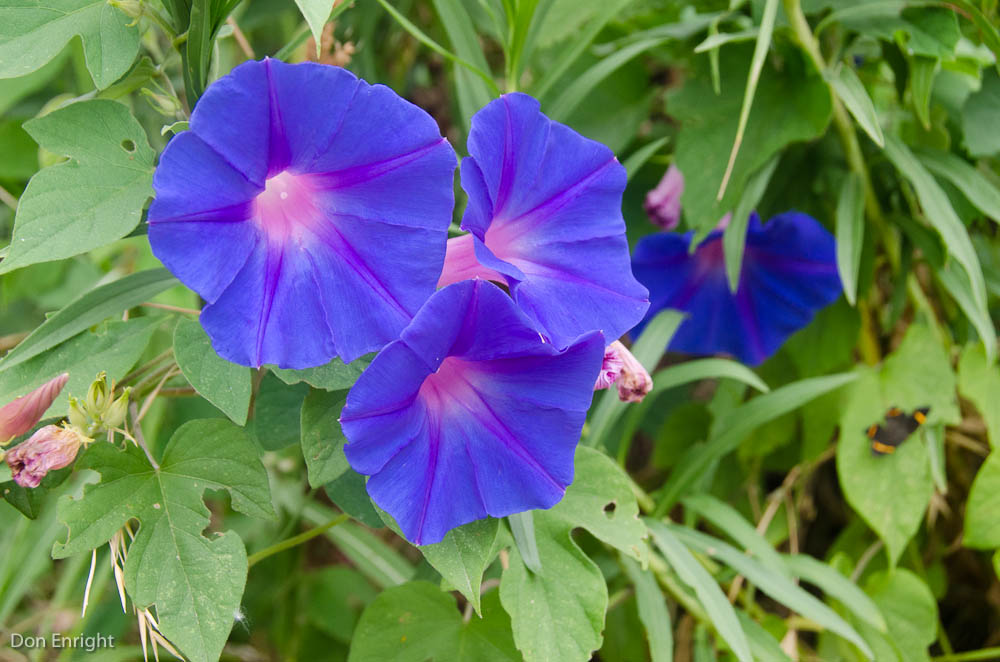 Morning glory in its native land

We got to Buenos Aires on New Year’s Day, and there wasn’t much going on in town. You kind of expect that in Latin America: on Sundays and holidays, you’re pretty much on your own. We didn’t care. We arrived by cruise ship and had seen a huge green space near the terminal that was, as luck would have it, within walking distance. The Costanera Sur nature reserve beckoned, and off we went. It is a remarkable place. There isn’t much structure to it: a chain link fence around the perimeter, a little warden’s cabin and a tiny trailer-cum-visitor centre. But the bird life is stellar. Monk parakeets screeched around us while mellow little cuis (wild guinea pigs) toddled across the pathways. I saw my first vermilion flycatcher there, and a crazy semi-predatory wild cuckoo called a guira. 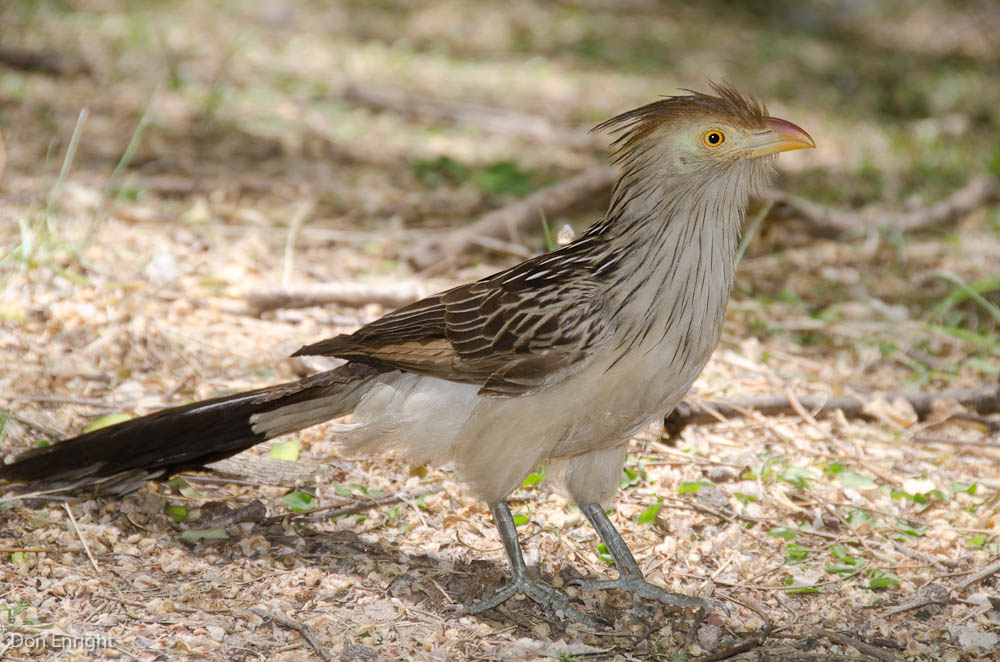 That’s Mr. Guira to you.

The coolest moment? We were photographing mockingbirds and native pigeons right from the street-side at the edge of the nature reserve. Suddenly, out from under a bush walked a fairly hefty black lizard called a tegu. The birds didn’t flush; they hopped away a bit and kept pecking around for seeds, a regrettable choice for one of them. The lizard lunged, and one of the mockingbirds was instantly reduced to an ungainly pile of feathers sticking out of its mouth. It was impressive, to say the least. 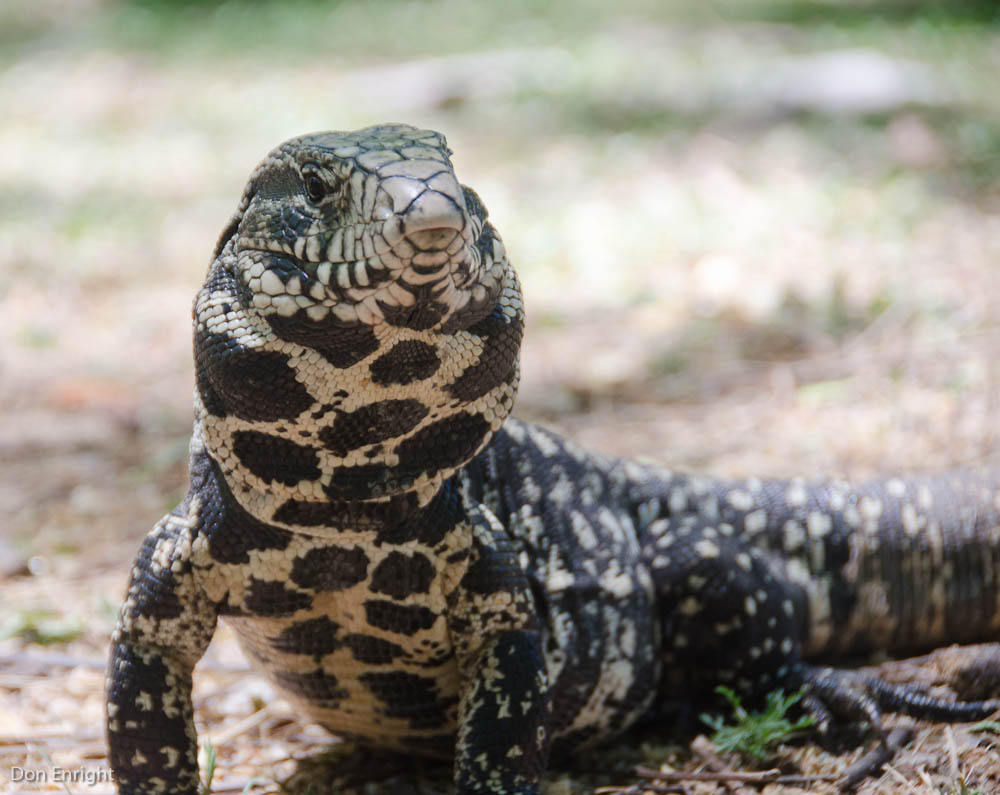 Never turn your back on a tegu lizard.

We returned to Costanera Sur the next day, and left after a few hours; we could have stayed all day but felt guilty visiting one of the world’s great cities and not making it past the wetlands on the edge of town. We hadn’t done a ton of reading in advance of the trip, but we had our Lonely Planet app, and set our sights on a distant cafe. We often do that, though we sometimes never reach our target. It’s the journey that matters. 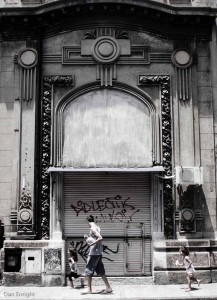 Out for a walk, San Telmo

We were struck at how very European Buenos Aires is, particularly just having visited Chile. In Valparaiso, we had seen brightly coloured homes inhabited by distinctly South American-looking people who spoke a particularly difficult Spanish. Here, the architecture was unmistakably Old World. Buenos Aires is a tremendously diverse city, and the blend of Italian, German and Spanish influences is reflected not only in the buildings but in the complexions of the locals. The language here is absolutely distinctive; those who study Spanish say that Argentinian is as distinct from Mexican as Mexican is from Castilian. I speak only enough Spanish to get myself in and (usually) out of trouble, but the gentle “sh” sound in the middle of words like ballena and pollo was a treat for the ears. 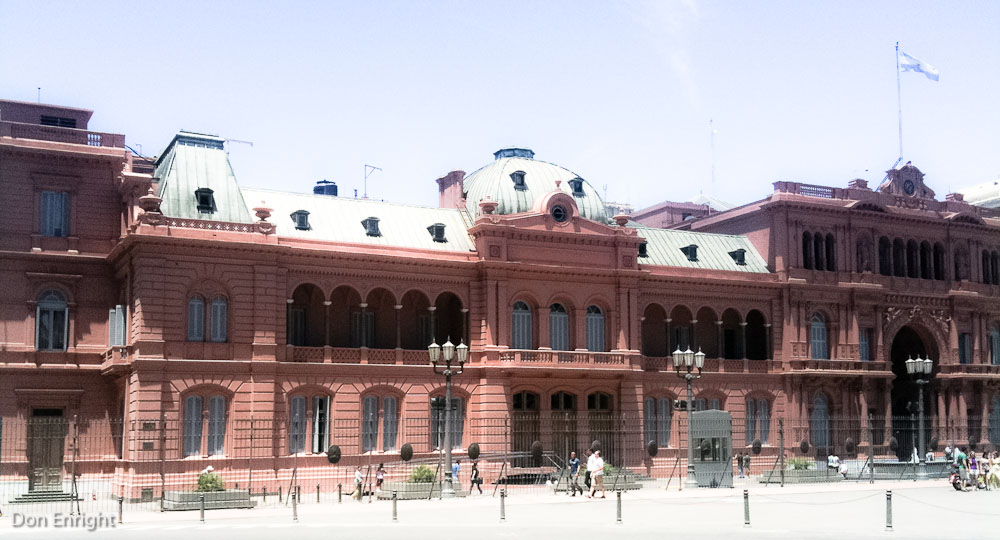 Don’t cry for me, Argentina

We paid homage to the presidential palace or Casa Rosada where I took delight in picturing Eva herself waving from the balconies. (OK, I confess I was picturing Madonna as Eva. Don’t judge me.) There’s not too much to remind one of Argentina’s painful political past, though it’s there if you look for it. Stories in the media told of the children of the disappeared, now in their thirties, who were working to recover their identities. Many of them had no idea that their biological parents existed, much less had been murdered by the state. 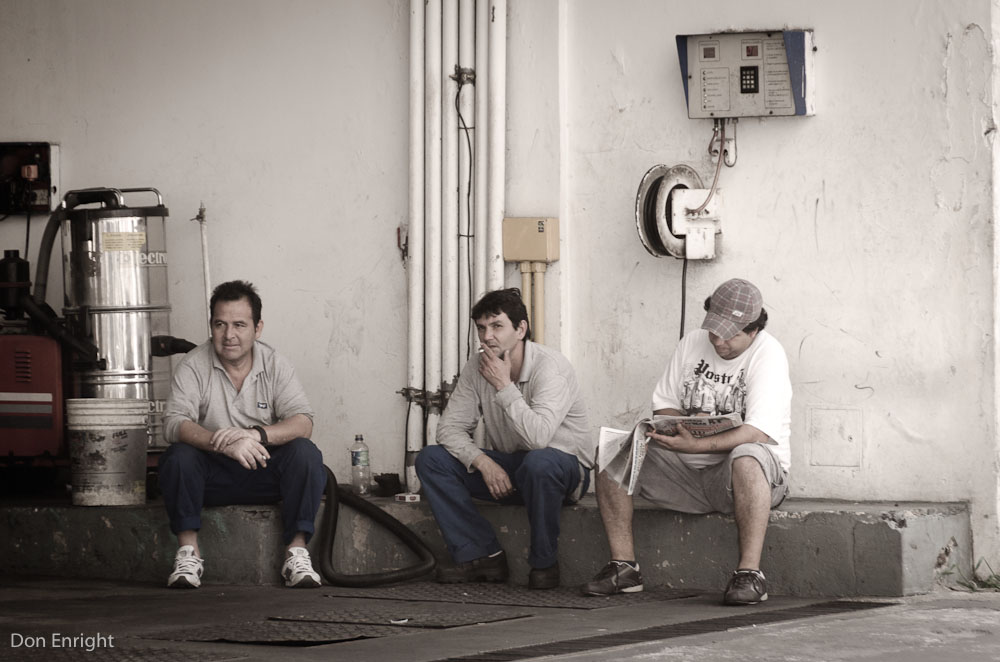 Our meanderings took us to San Telmo, which is the oldest barrio of the city and a street photographer’s dream. There’s a fantastic flea market, endless pizzerias with gorgeous wooden interiors, warehouses, and bars where one can tango the night away. 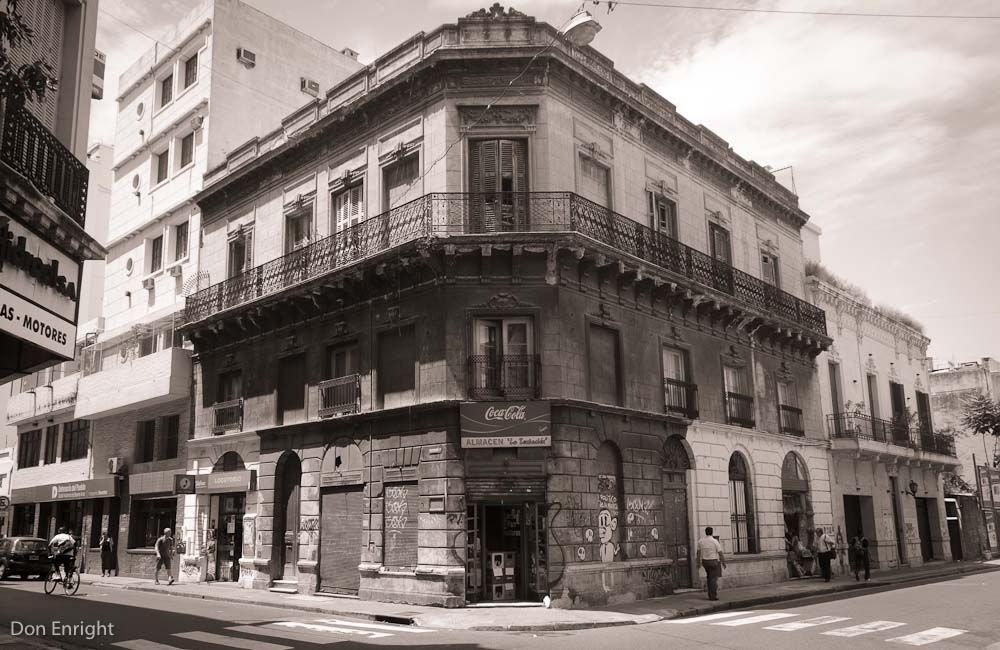 We slowed down and started photographing everything we saw: parents walking with children,  people in cafes, shop owners, and fantastic colonial buildings. Nobody paid much attention to us, which is typical in a big city. We had been warned that Buenos Aires could be rough, but we found it surprisingly safe for a South American town. Mind you, we stuck to fairly high-traffic areas. 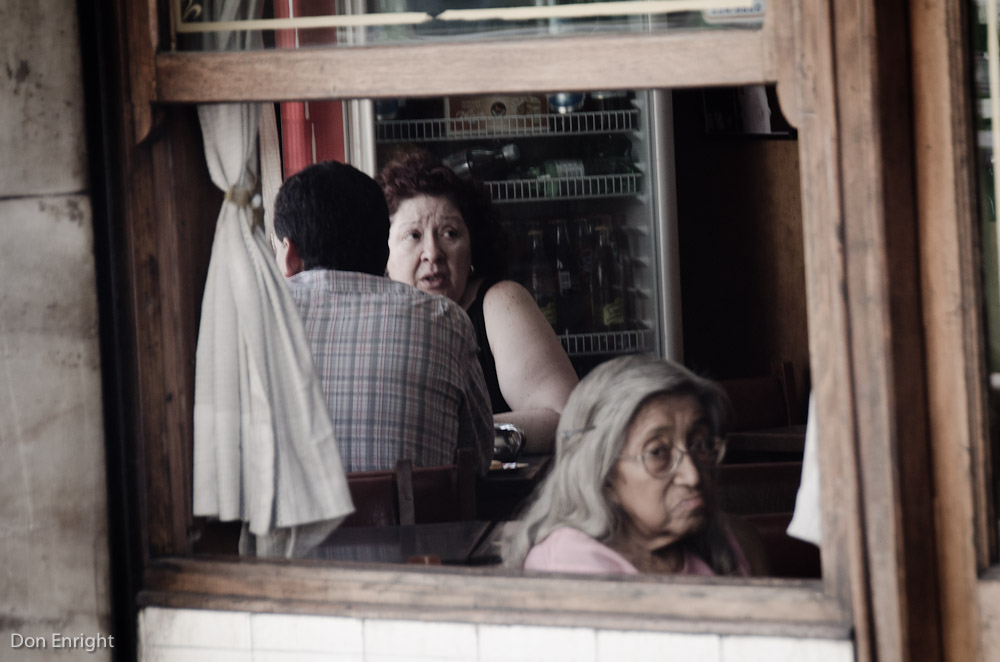 It was somewhere near San Telmo that I realized that the little tumble I had taken off a curb the day before really was taking its toll. My ankle was throbbing, and we were a long ways from the ship. We never really pay much attention to how many kilometres we put in during a typical day’s wandering, but piecing it together after the fact via Google Maps, it’s often over 20 km. And so we slowly began to limp our way back. It was getting a bit warm in the summer heat, anyway, we told ourselves, and we needed a break. At any rate we had hundreds of photographs to sort through, and dozens of new birds to look up in the field guide. 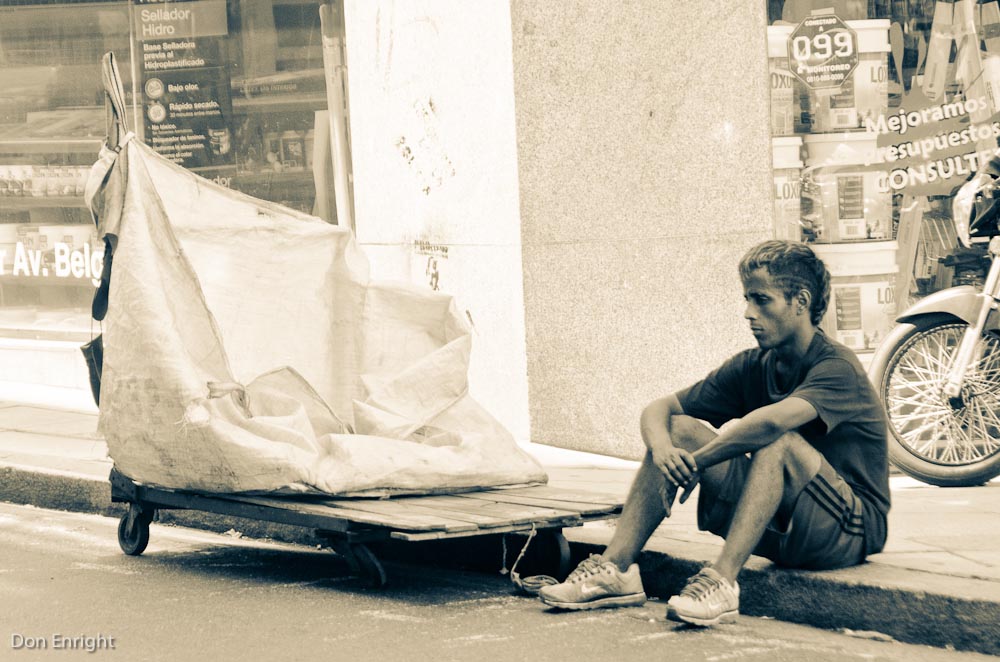 Two days in Buenos Aires is nothing, of course. But we got a pretty good taste of the city and its green spaces. Looking back on it, I’m amazed how much ground we were able to cover, and all of it on foot.

I’d go back in a heartbeat.