Frigatebirds are the unofficial mascot of every cruise ship in the Caribbean. But getting a good photo is harder than it looks.

Being a birdwatcher, or a ‘birder’ as we call ourselves in a vain attempt to sound cool, is not for everyone. I recognize this. But when people tell me, emphatically, “I just CAN’T tell one kind from another! It’s too hard!” I have to disagree. Honestly, anywhere you travel, there is at least one kind of bird that is common enough, distinct enough, big enough and bold enough for anyone to easily learn by heart. 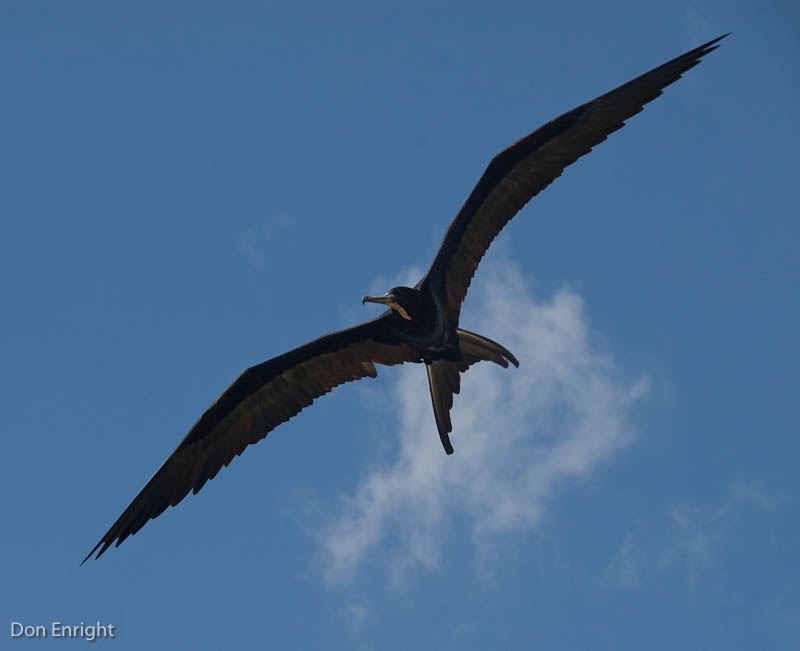 Over two metres in wingspan (yes, that’s seven and a half feet, bigger than a bald eagle), with that crazy forked tail, you really can’t mistake them for anything else. And you won’t forget the name, either: they are well and truly magnificent.

And as for the “frigate” part of their label, well, they really are warships of the air. They earned the name for their habit of stealing other birds’ hard-earned prey. (The official term for that unsavoury habit is “kleptoparasitism”. Isn’t that awesome?)

You’ll see them soaring and swooping as you cruise into any tropical port. One thing you’ll notice, if you spend time watching them, is how delicately these warships behave when they’re at the water’s surface. These powerful creatures suddenly become fastidious, carefully picking their food off the water. No full-on diving for them. Leave that to the pelicans and the boobies, who crash hard and deep into the water in pursuit of their prey. Frigatebirds just can’t afford to do that; their feathers aren’t waterproof. Yes, you read that correctly: a bird that lives and eats and depends completely on the sea can’t risk getting wet. And if they did go for a dip, they’d be terrible swimmers—their tiny feet have no webbing.

There’s the technique, right there.

Leave the water, then, to lesser birds; these are the masters of the open sky. I remember one of my first sightings of them, in Costa Rica, where they were circling with a group of vultures. I’ll never forget how hard the vultures appeared to be working, how completely clunky they looked in the air, next to the effortlessness of the frigatebirds. They can literally fly for days, with very little expenditure of energy. In fact the frigatebird has the distinction of having the lowest wing-loading of any bird on earth. That is to say, the mass of the animal in relation to its overall wing surface is very, very low. (At the other end of the wing-loading spectrum is the common loon, who has to labour like a fiend just to get airborne. Once up, mind you, they’re unstoppable.) 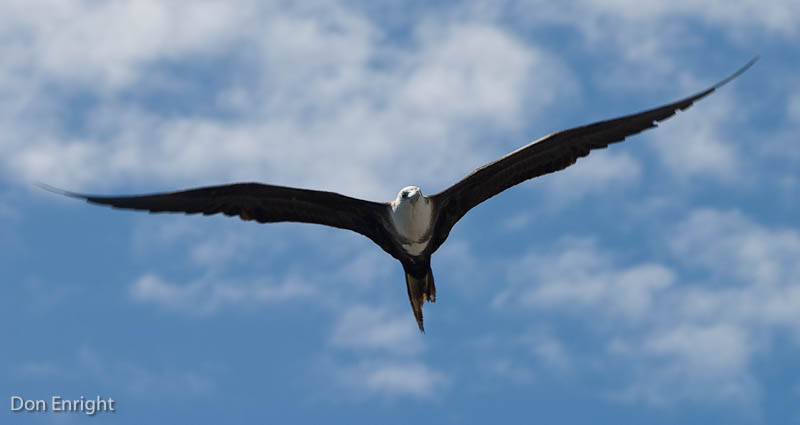 There is a cost to that aerodynamic build, though: they don’t have a ton of their own power. All that soaring is well and good, but when a storm rolls in it’s the frigatebirds who are the most likely to get blown, out of control, far beyond their normal range. They pop up in odd places like San Francisco and even Alaska—to their own chagrin, no doubt, but to the delight of local birdwatchers.

Their effortless agility make them a bit of a frustrating subject for photography. You’ll see them everywhere on a Caribbean cruise—at least, everywhere along a coastline. They’re the unofficial mascot of every cruise ship in every port. But getting close enough for a photo is another story. 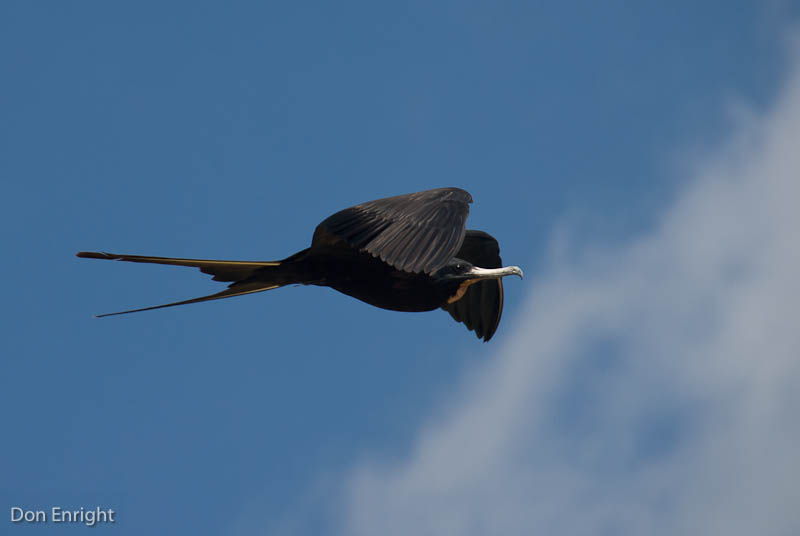 “Pirate Bird” is another traditional name.

For bird photography, they tell you that you either need to get good and close, or have a very long lens. In reality, I’m here to tell you that any great bird photo is the result of both proximity and magnification. And the frigatebirds are just so freaking agile. They soar high up against the bright sky, endlessly, only to drop like a stone when they see a fish near the surface. And whoosh, back into the heavens. These birds are good.

Which brings me to Basseterre, St. Kitts one January day not long ago. Picture me and my telephoto at the water’s edge: aiming, shooting, laughing and cursing my morning away. Watching me with bemused detachment was one of the local fisherman. I had said hello earlier and asked for his photo; he was beautiful. Then we both went back to our tasks at hand. Finally he could bear no more of my frustration. He picked up his gut bucket, walked to the shore and said, “Watch this, mon. Ready?” 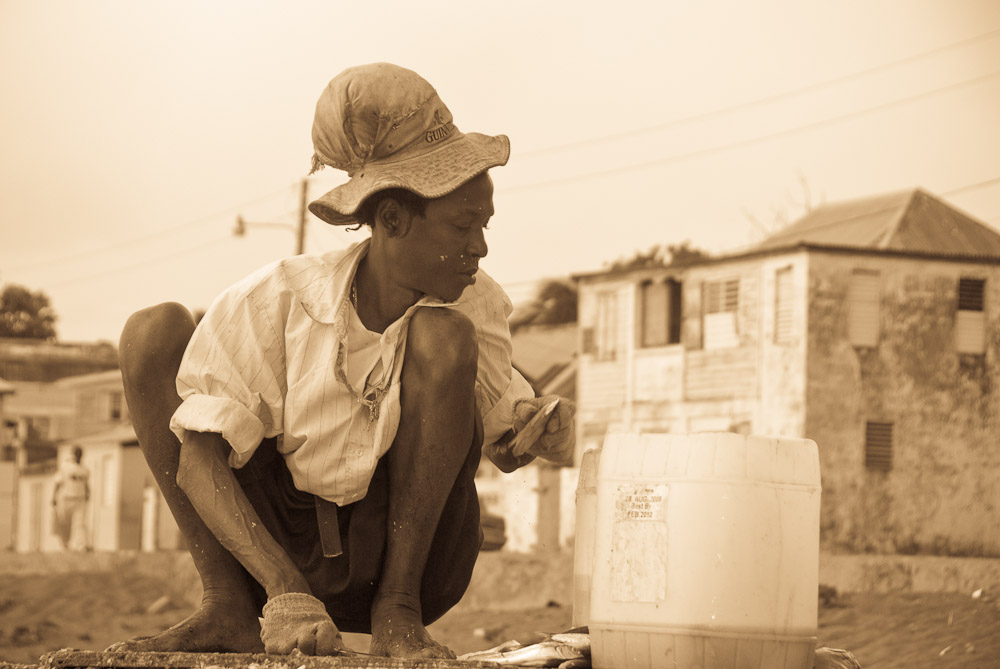 The frigatebird whisperer. Thank you, sir, whever you are.

And with each toss of a small piece of fish flotsam, in came the frigatebirds. It was spectacular; I thought I’d died and gone to photographer heaven. First came the adult males, big and sleek and black. Next the females and juveniles took their turn. I snapped and snapped, and actually managed to catch a few. He was kind enough to pause from time to time, allowing me to get my bearings and take a breath before launching more of those wonderful fish bits into the air. It only went on a minute or two, but it was absolutely exhilarating.

I thanked him profusely and offered him a little cash for his troubles. He didn’t refuse. We each went our separate ways.

I will treasure the memory, and the images, for many years to come.