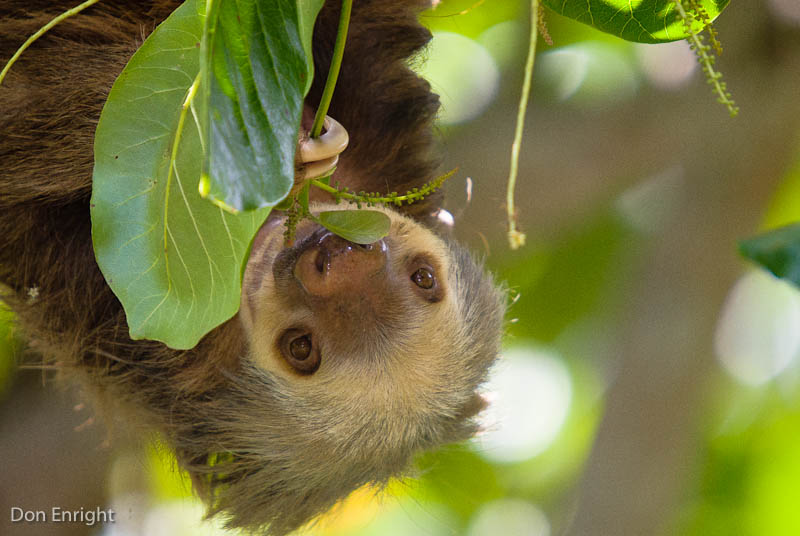 It’s not upside-down. You are.

Almost everything you do on the ground, sloths do in the trees, upside-down and in slow motion. They’re the Ginger Rogers of the animal kingdom.

I’m staring straight at it, and I can’t see a thing. I’m standing in the sweltering, sticky afternoon air of Costa Rica’s Atlantic rain forest, squinting, craning my neck, shifting sideways… and I see nothing but leaves. Yet my young companion is pointing straight at it. “There! Right there!” Clearly I’m blind or an idiot. And then, at last, a tiny, subtle swaying motion in the tree—slow, smooth, graceful—gives it away. I have it! A Hoffman’s two-toed sloth, my very first, right at eye level. If it were any closer it could lick me. I focus my lens and zoom in for the shot. Those eyes! That wet puppy nose! My heart melts and my shutter finger starts snapping. I’m hooked. Hooked on sloths. 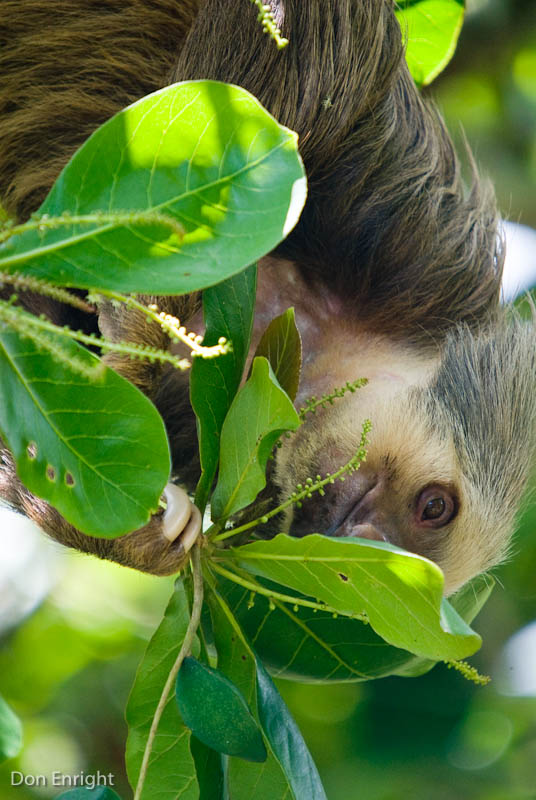 It takes serious street cred to have a deadly sin named after you, and sloths have their lifestyle down to a fine art. The first rule of slothfulness is to conserve energy. Their metabolism is slow and their body temperature is low; these guys are cool. They have to be: a diet of almost nothing but leaves isn’t exactly rocket fuel.

Once upon a time scientists believed they slept their days away, but more recent study shows they only nap for 10 hours out of 24, less than many civil servants. They’re actually fairly industrious workers, spending their days filling their bellies with leaves. They have multi-chambered stomachs to help process the relatively huge quantities of green they need to meet their basic requirements. They must make pretty good use of all that roughage, too; they only defecate once a week. It’s quite a production, as they painstakingly make their way to the ground to find their habitual toilet spot. Everything else—everything you do on terra firma, and I mean everything—they do in the trees, and do it upside down and in slow motion. They’re the Ginger Rogers of the animal kingdom. 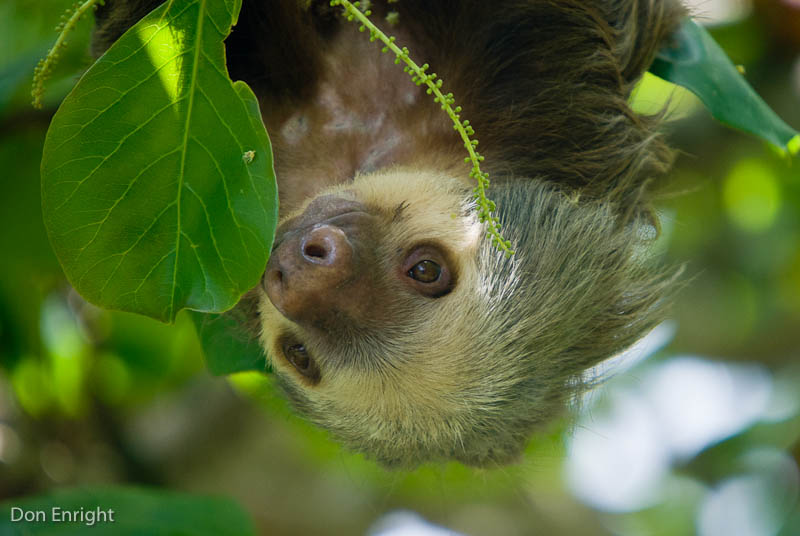 Lechery? Gluttony? Where are their ambassadors? (And if they existed, would Toronto elect them mayor?)

And they do it well. You’d think they’d be easy fodder to all kinds of carnivores—what are they going to do, sprint away? But their only predators are jaguars, eagles and us. That amazing camouflage is a nearly fool-proof defence. I used to work at the Vancouver Aquarium where we had three sloths in a rainforest habitat. People used to spend hours looking for them; it was my favourite thing to suggest to families with hyper kids. And again, they could be right over your head before you’d spot them. (One of them was named Hurricane, clearly by a caregiver with a sense of humour.)

Of course, their life skills can’t protect them from all of the dangers that humanity lays in their path. Poaching and power lines are their greatest threat, and an orphaned sloth doesn’t have much hope in life on its own. 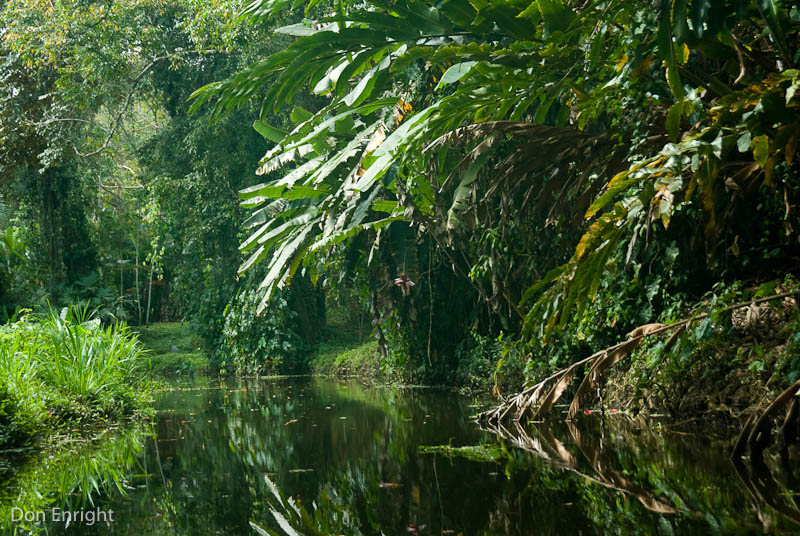 The Aviarios del Caribe Sloth Sanctuary, on the Estrella River

That’s where the Aviarios del Caribe Sloth Sanctuary comes in. A private nature preserve along the Estrella river, in the heart of some of Costa Rica’s swampiest rain forest, it was founded by the Arroyo family in the 1980s. At first, they had no intention of specializing in sloth rescue, but as it happened, nobody else was doing it. They rescued their first, Buttercup, in the mid 1980s, and suddenly they were Central America’s experts. Today they rehabilitate dozens of three-toed sloths and Hoffman’s two-toed sloths each year, and those that can’t be released become ambassadors for their species though a partnership with the prestigious Dallas Zoo. 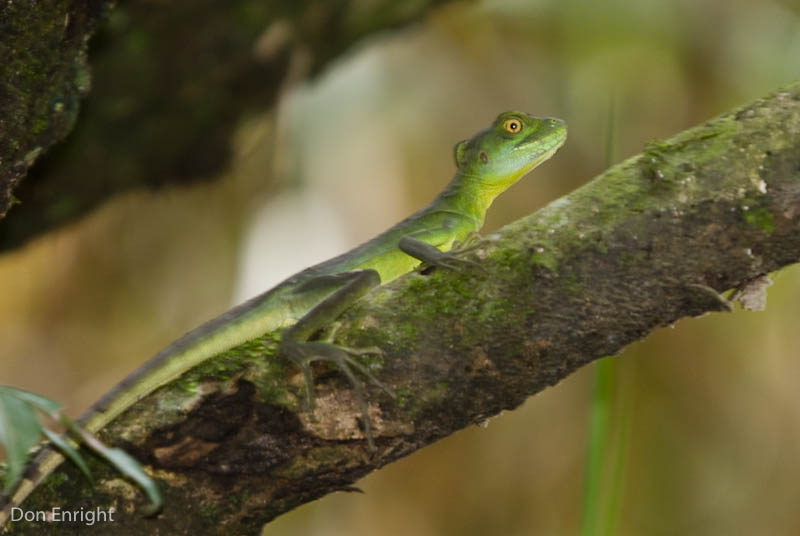 A visit to the sanctuary is not just a cuteness overload (and they are adorable.) It’s a glimpse into a relatively intact rain forest wetland, and when you arrive, the local guides will take you on a tour in their dugout canoes where you can spot basilisk lizards (locally known as Jesus Christ lizards for their habit of running on water), jacanas (funky wading birds with huge feet), herons, and a host of tropical songbirds. 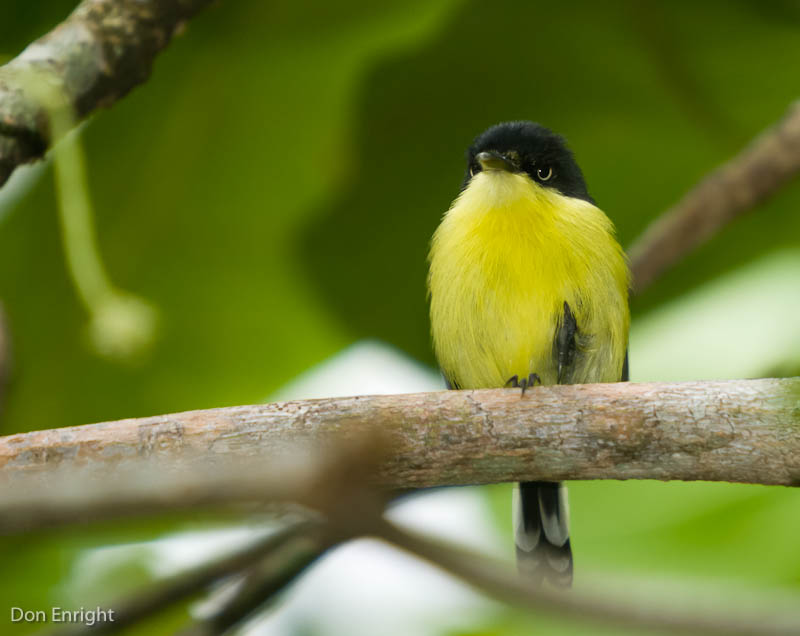 It is an inspiration to meet people who have dedicated their lives to making the world a safer place for wildlife, and choosing to spend your tourist dollars on a visit to a sanctuary like this seems like a pretty rewarding investment to me.