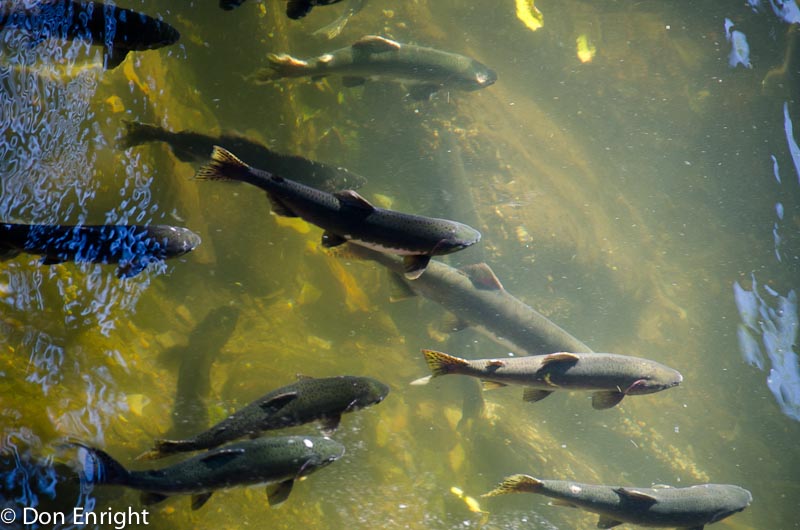 They tell me I can cross an Alaskan river on the backs of salmon and not get my feet wet. Here today, I can almost believe it.

Today, I’m in Ketchikan, Alaska and it’s not raining. This is not a small thing. I have seen Ketchikan in gentle drizzle and I’ve seen it under sheets and sheets of pouring rain. But I can’t recall when I’ve seen it under these pure blue skies and this gorgeous, angled autumn sunlight. So off we go, camera and lenses on our backs, in search of any adventure these generous skies might illuminate. And it doesn’t take long before we find it. The Ketchikan River is seething with pink salmon—absolutely boiling with them. Alaskans, I am learning lately, like to tell tall tales, and I’ve been promised more than once that I should be able to cross an Alaskan river on the backs of salmon and not get my feet wet. Here today, I can almost believe it. What a spectacle!

It is one thing to read of the tremendous physical toll the migration takes on Pacific salmon. But standing at the stream’s edge and watching them at work is something else again. What strikes me the most is the miserable condition of many of the fish. Gashed and lacerated, flesh hanging off them, they look like they’re rotting away alive. Are these the successful spawners who have made the supreme journey and drifted back downstream to die a hero’s death? I hope so. Because I’m standing not a kilometre from the mouth of the estuary. Surely they can’t look this awful having just arrived. To think that these pinks have lived two years at sea, traveling untold thousands of kilometres, only to collapse and fall apart before even heading upstream is, well, a bit depressing. God knows what they’ve been through just getting here. 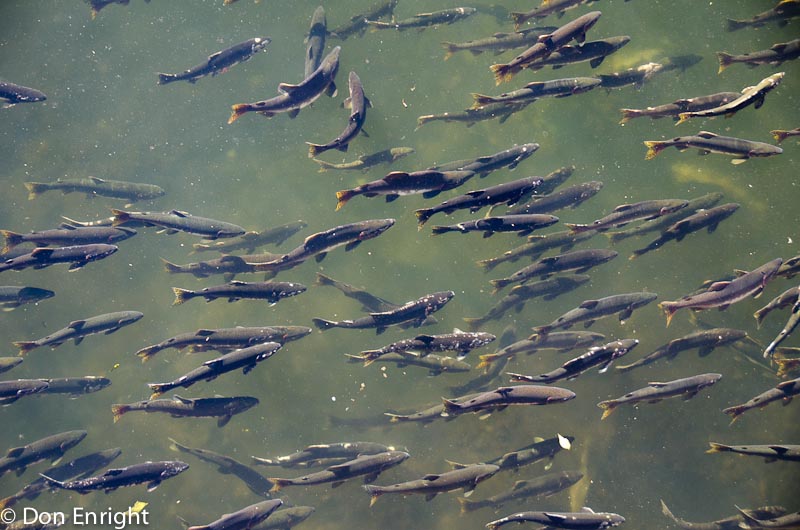 As far as the eye could see…

I’d always known that the journey upstream was difficult. But somehow the documentaries only show you the successful ones: those who leap bravely and gracefully into the next pool and away. But it doesn’t work that way in the wild, at least not here on the Ketchikan River. The fish linger in an eddy, jockeying for position, and then yes, they leap- but not always successfully. To see them jump full-strength straight into a sharp rock and bounce limply downward again is a bit heartbreaking. To see one make it through a promising stretch, through the frothing waters up, up and up again… only to hit a really rough patch and be swept all the way down to square one again is, well, Sisyphean.

It’s a bit like watching the Olympics. Actually, it’s a lot like that. For each glorious winner, you have the sick-making experience of seeing someone who has lived for no other purpose than this moment, for the better part of their lives, failing before your eyes. And there is no second chance; there’s no next-year country. For pink salmon, death comes at two years of age, whether they’ve grabbed the brass ring or not. The rocks here are littered with the bodies of the fallen.

They don’t tell us these things in school—that you can dedicate yourself to something, working with purpose and dedication and sacrifice, and you just might not make it. Our society is hooked on the risk-reward myth. “If you can dream it, you can be it!” We’re a bit blind to the risk/failure half of that equation. Nobody likes a loser, do they? 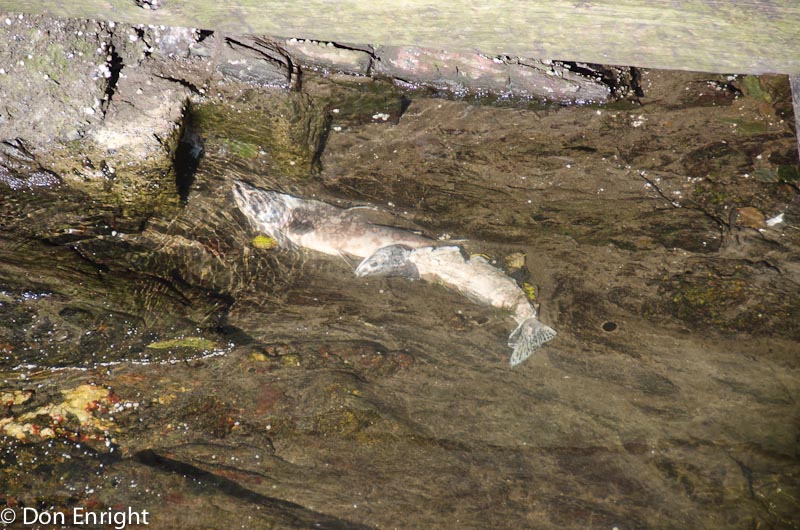 I move to the water’s edge for another photo, and the stench is overwhelming. We know that salmon find their natal streams by smell; they somehow catch a minuscule whiff of home out there at sea and toward it they swim. But how does their home smell different than the neighbours’, when it all smells like awful rotting fish? Much of it appears to be going to waste, too. In the films, there’s always a bear or an eagle or a raven salvaging a little energy from the corpse. But here, there just aren’t enough eagles to go around.

I guess nothing in nature is wasted, ultimately. The volume of nutrients that rotting salmon disperse into the environment has been well documented. Marine isotopes, the tiny building-blocks of salmon flesh, show up in cedar trees eventually, deposited on the forest floor by sated mink and bears and crows. Even these also-ran salmon, decomposing right in the stream, have donated their organs to the greater good, as nitrogen and carbon disperse downstream into the ocean again. From failure, life—and from life, hope for the next generation. I guess we can’t ask for much more than that, can we?