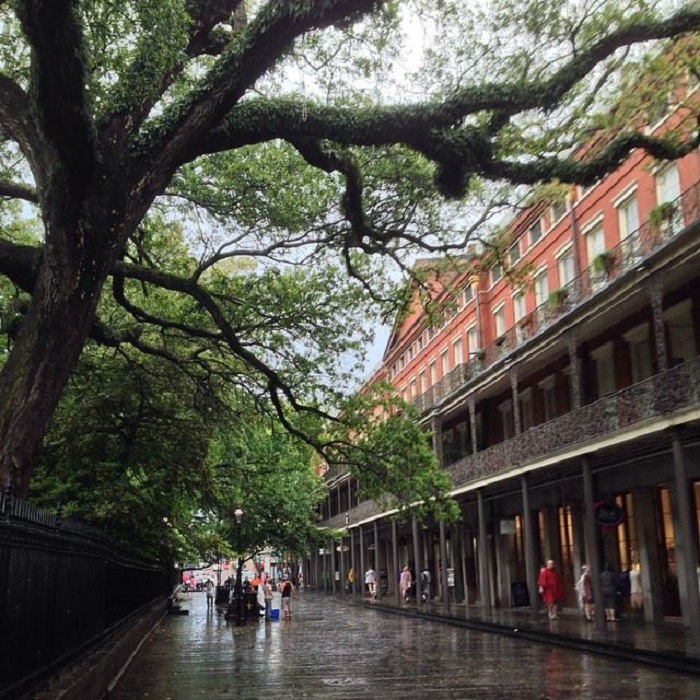 Editor’s note: I’m thrilled to host this new post by my friend and colleague, Doug Heaney

The Top 5 Feelings You’ll Have in New Orleans

Recently, my partner and I found ourselves in New Orleans to catch a cruise down to the Western Caribbean. And as much as we enjoyed the cruise part of the trip, the time we tacked on pre- and post-cruise in New Orleans is what’s really sticking with me. So in trying to isolate just what it was that makes me want to get back down there, I came up with a short list: sort of half emotions, half sensations that NOLA left me with.

Like to the skin. I doubt you can avoid this one. According to my friend the Internet, New Orleans is the 3rd wettest city in America, with an average monthly rainfall of about 4.5 inches. Even with all that rain, almost 10 million people visited the city in 2014.  I was a bit disappointed when we arrived back in the city after the cruise and I saw that it was pouring. But here’s the thing; New Orleans looks amazing when it’s wet! All lush and glisten-y. Sometimes the rain forces you to duck into whatever’s nearby; so we found a couple of cool shops that I’m sure we wouldn’t have otherwise. Like this one (with a million hot sauces). And it was easy to buy a decent cheap umbrella, which by the way, I’ve already used back home in Halifax. (Full disclosure though – I was not devastated when the sun came out in the afternoon.) 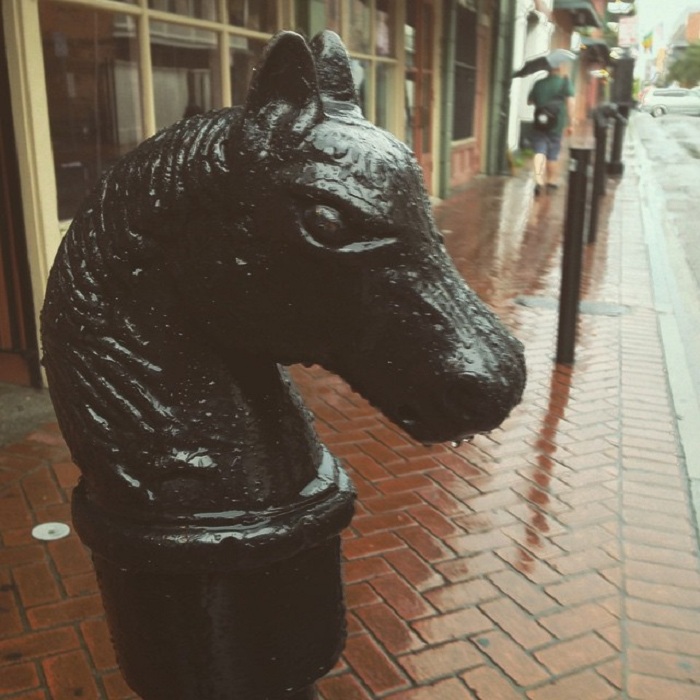 2. A nice balance of constant hunger followed by utter satisfaction

I had very high hopes for the noshing in NOLA. No disappointments here: beignets at Morning Call in City Park, the Shrimp Po’ Boy at Tujagues, and my first taste of real Creole recipes at Mandina’s in Mid City. Tujagues (in the French Quarter) is famous and was recommended by some local expat friends. It was on our list, but we actually just kind of stumbled upon it around lunchtime, so it was kind of a nice surprise. As were the $3 glasses of wine, the friendly service and the heaps of fresh tasty eats. Mandina’s was just luck; we walked by it as we made our way from the streetcar to our accommodation. Convenience, plus great Yelp reviews made it our dinner destination (twice!). A genuine neighbourhood restaurant. 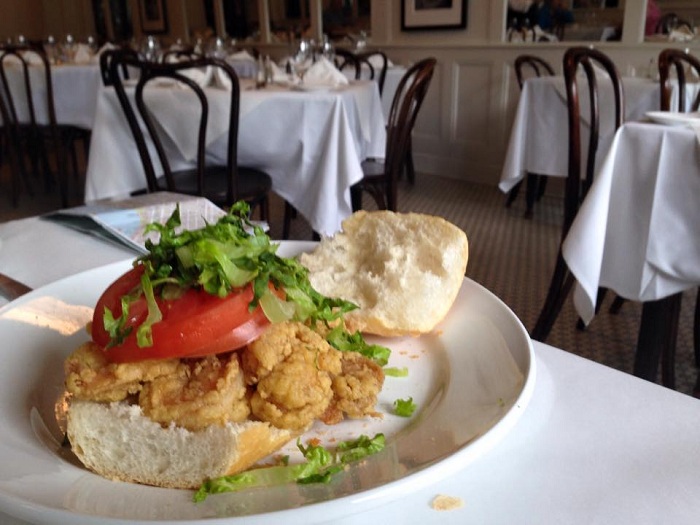 The Shrimp Po’ Boy at Tujagues

3. Something I describe as “feeling just frightened enough”

Does it make sense to feel “pleasantly on edge”? Because that’s kind of how it felt. While at home still in planning mode, I was poring over AirBnb reviews (which were glowing about the hosts and the accommodation) and I noticed a few that made the neighbourhoods we were looking at sound unsafe. A few Googles and YouTubes later, and I was beginning to see their point. But frankly, I think lots of people wouldn’t want to stay in our own neighbourhood in Halifax, and we love our up-and-coming neck of the woods! So—whether or not I should have—I took comfort in that. New Orleans is exciting, and perhaps part of that excitement comes from a certain sense of risk, even if it’s only perceived. (By the way, in keeping with this theme, I went for the “Near Death” hot sauce from the emporium we visited up in #2.) 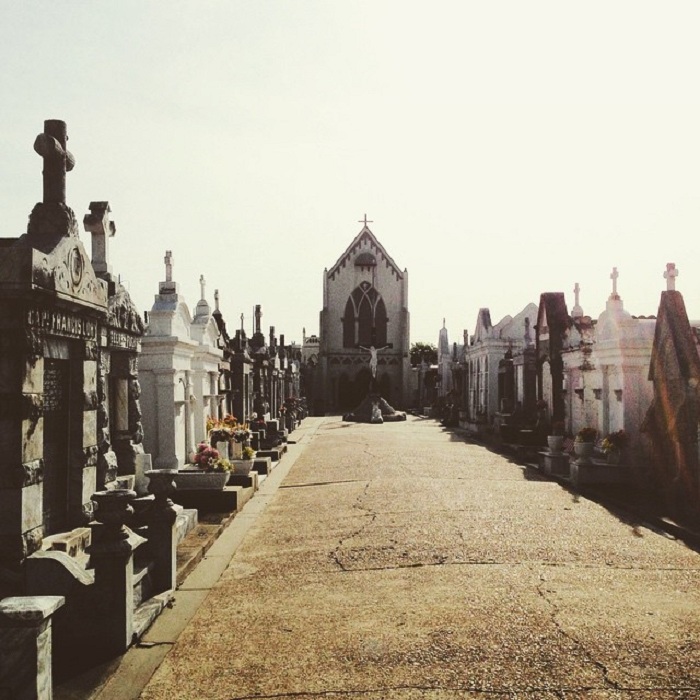 Among the dead in St Roch Cemeteries

Weird, I know. I was just talking about feeling on edge. But the yin to that yang is that I also felt an ease in New Orleans, sort of like I had been there before. Maybe it was the hospitality; we were sincerely and warmly welcomed (such as by Will and Pierre via AirBnb and our expat Canadian friends). And there’s the climate; sure, it was wet, but so lovely and warm. Like a hug. We’ve travelled to Thailand many times, and Bangkok now feels like a second home. When I think of what I love about Bangkok; the steamy climate, spicy food and friendly locals, I see it’s kind of a no-brainer that I’d have a similar response to New Orleans. (I checked, and as far as I can tell, New Orleans’ sister city in Asia is Matsue in Japan, but I think Bangkok and NOLA would be a great match.) As much as I love Bangkok, New Orleans is actually a much more beautiful city. Beautiful corners in Bangkok are always a bit of a great surprise; for sure, they are easier to find in New Orleans. 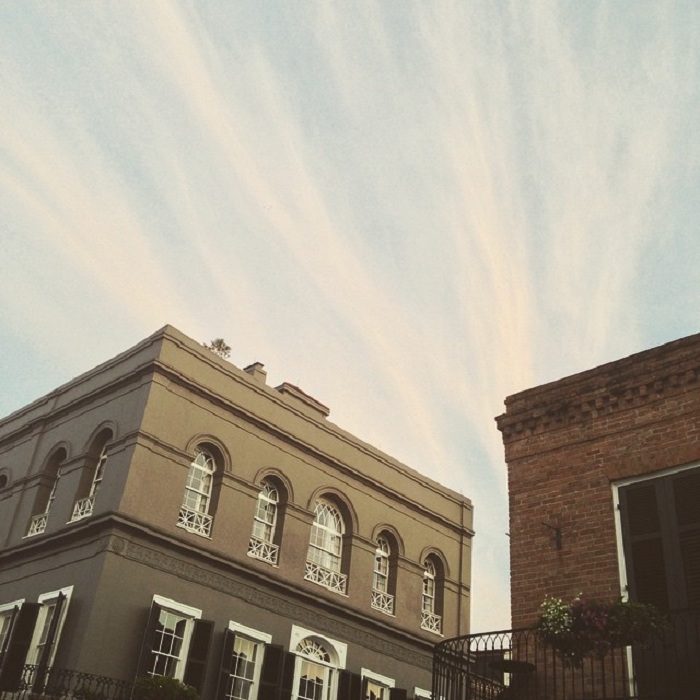 We walked a lot, and we saw—and heard—a lot of construction and renovation going on. And we definitely saw houses that have probably been abandoned since Katrina; but our all-too-brief stay left me with a real sense that New Orleans is rebounding. It’s taking a long time, and it might be hit-and-miss, but it’s happening nonetheless. For many years, our own neighbourhood in Halifax has been going through a renaissance as well, and not without similar tensions between communities and development, or tradition and change.

So like I said, I can’t wait to get back down there. Think about ticking it off—or adding it to—your bucket list. (Phew! Got it in there. I’m pretty sure it’s illegal not to use the term “bucket list” at least once in a travel writing piece, or you get kicked off the Internet.) 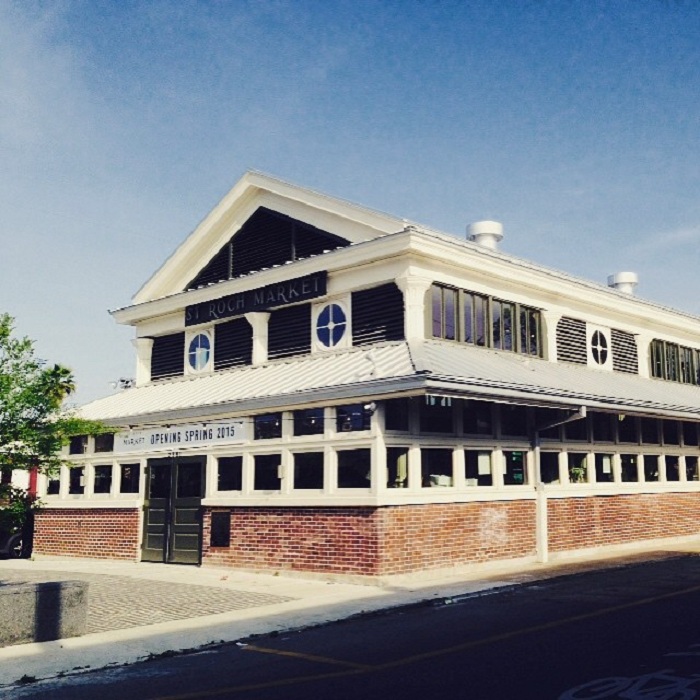 The gorgeous reincarnation of St Roch Market. (We missed its grand reopening by mere days!)