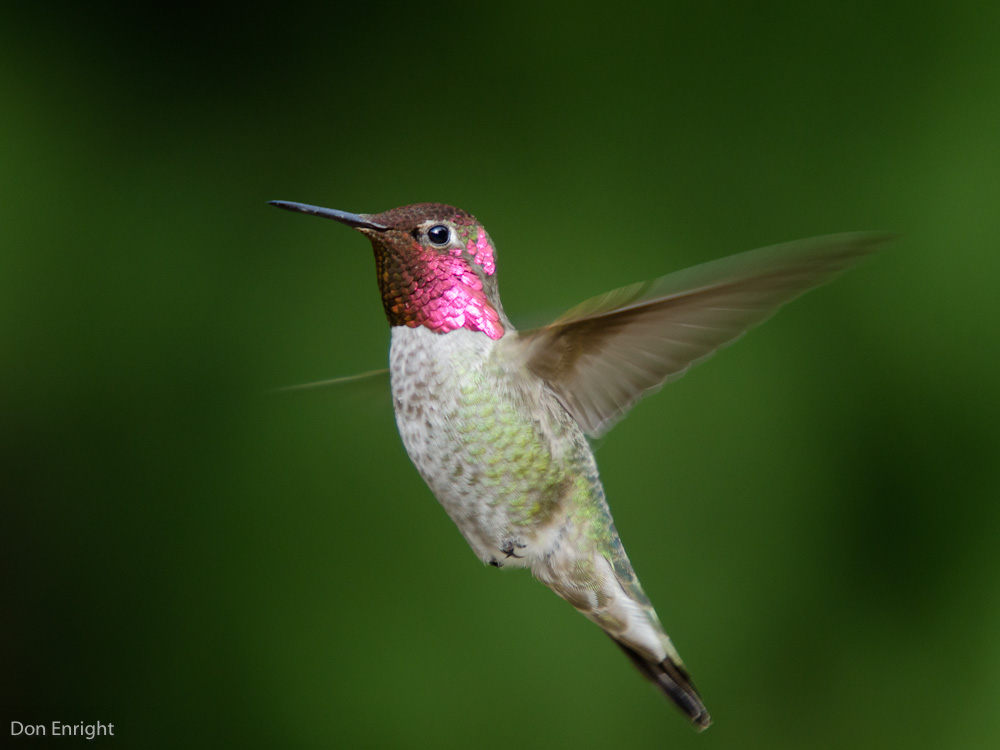 When you’re Canadian,  few things are as improbable as a hummingbird in January.

Even a temperate, West Coast January seems a harsh setting for so tiny, so delicate-looking a creature. Yet there he is, a male Anna’s hummingbird (Calypte anna), perched in a willow barely an arm’s length away, and he doesn’t look any the worse for the weather. In fact, he seems as comfortable as you please, preening, stretching his tiny wings and… is he singing? He’s singing. At least he thinks he is, tilting his needle-like beak skyward and letting loose with a hearty skareeka skareeka skareeka. Next, his tiny wings appear to spasm and then buzz, and he’s off like a shot to continue his morning patrol. I set up my camera, pull on my toque, and wait. I’ve spent enough time with these characters to know he’ll be back.

As a nature guide, you get to know your fail-safe birding spots: those places you take your clients after a particularly dry morning, when your regular haunts have produced nary a twitter.  The male Anna’s hummingbird, with his habit of patrolling the same perches within his small territory like clockwork, has been my salvation more than once. My money spots are along Dallas Road in Victoria, BC, where for the last seven years, I have been able to produce hummingbird sightings as if by magic. I have no idea if I’ve been spotting the same individuals all this time; given their lifespan of six to eight years, it’s possible. But I suspect there has been a procession of males, each occupying the exact same branch of the same tree as the last. In nature as in retail, location is everything, and when one male joins the choir invisible, another buzzes in to take his place. I like to think that my choice hummingbird spots have been inhabited by generations of feisty male Anna’s, passing their brilliant red torch to one another as the years go by. 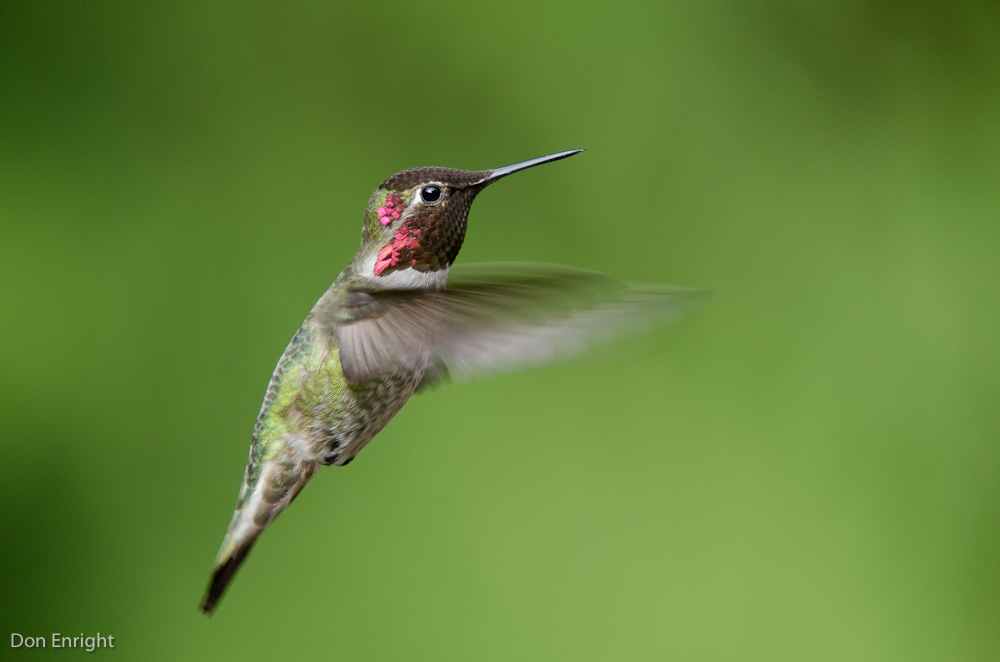 I wonder if my subject this morning has any idea what a runt of nature he is. He certainly doesn’t seem to; for all his four grams of mass, this is a bird with a falcon’s courage and the bellicosity of a bantam cock. One glimpse of a rival male will launch this little fighter into his signature dive display, a twelve-second blur of colour and noise that entails hovering over and scolding his opponent, then climbing 40 metres straight overhead before dropping like a stone, orienting his brilliant ruby crest at key moments to reflect sunlight toward his adversary, lest he otherwise miss the point. It’s a routine that seems to apply to rival males and desirable females alike, alternately intimidating and impressing with a tireless show of hummingbird fitness. 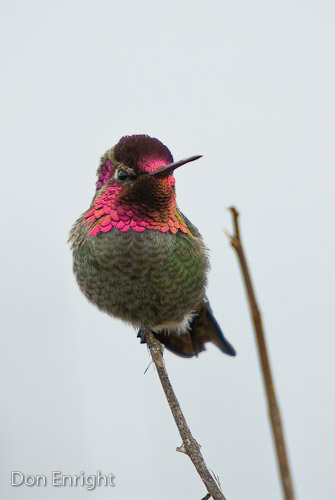 As for their fortitude in the face of wild Pacific winters, I should point out that they haven’t always been so tough. In fact, they haven’t been here at all, up until the 1950’s or so. Our original, native hummingbird is the beautiful Rufous (Selasphorus rufus), a resilient bird in its own right, a hummer with the common sense to ship out to Mexico when the going gets tough. (Its journey is the longest bird migration in the world, if you measure in body-lengths).

No, the Anna’s is an opportunist, a parvenu on the local avian scene, and though they made it here of their own volition, they certainly wouldn’t be here if you and I weren’t. That is to say, they introduced themselves, expanding their territory northward from their native California, breeding their way northward to take advantage of the industry of west coast gardeners. Unlike the rufous who must depart when their food supply dwindles, the Anna’s make its living on fuchsias and other long-blooming backyard exotics, with a fair bit of its winter calories coming directly from nectar feeders. By depending on the kindness of strangers, the Anna’s has found a way to thrive through these damp and frosty winters, nesting in the depths of winter each year, long before the Rufous return for the blooming of the salmonberries.

Not that this lifestyle of shivering through January storms is a picnic, mind you. Many Anna’s don’t make it, and the survivors are those that manage to store enough fat to make it through nights that plunge to -8C, aided by their remarkable capacity to shut themselves down metabolically until the mercury climbs again. Hummingbirds are unique in many ways, but their ability to enter a state of torpor is one of the most ingenious secrets of their success. When temperatures drop, they take refuge on a sheltered perch, and allow their body temperatures to plummet from their normal 36-40 degrees C down to 17 degrees or less (the record is 8.8 C), a reading that would kill any human from hypothermia. It’s a kind of mini-hibernation: they appear for all intents and purposes to be dead, yet when re-warmed can become fully animate within a few minutes. Anna’s aren’t the only hummers with this talent, but they may be the best at exploiting it, having been spotted in December as far north as Anchorage, Alaska. 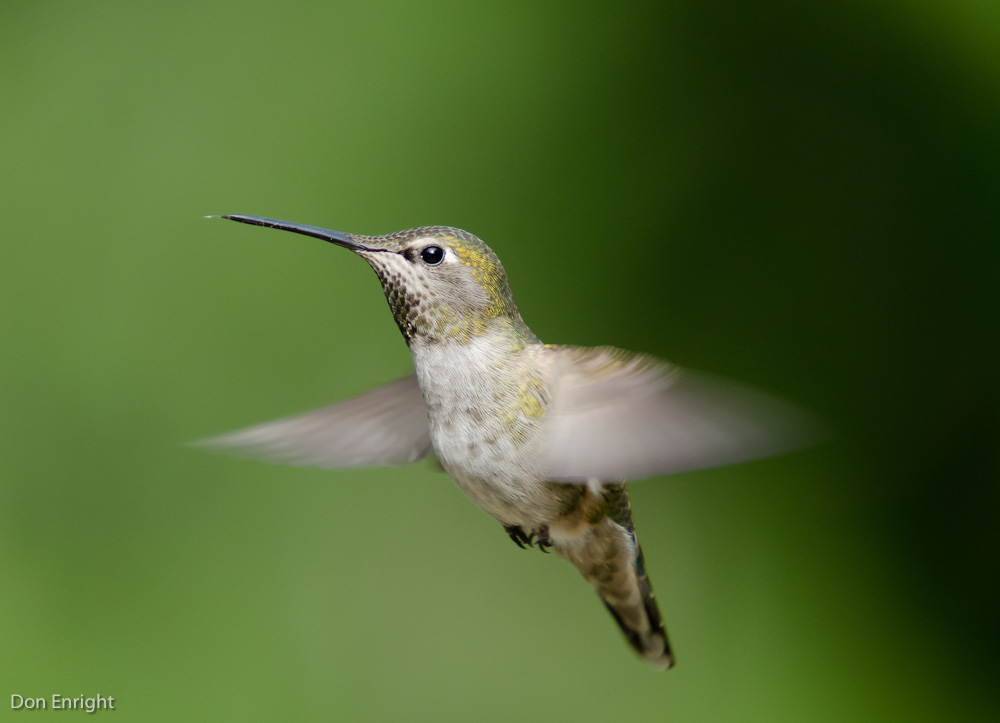 Her little tongue is out.

Less flashy and a little less predictable than her mate is the female Anna’s hummingbird, easily recognizable in her modest green and buff attire. Like any pioneer, she’s a tough, no-nonsense type who relies on no-one but herself to get things done. As breeding season approaches, as early as February 1st in our region, the female Anna’s stakes out her own territory, a small piece of real estate near a reliable source of nectar. Next comes nest-building, a week-long process in which she alternates three or four trips to gather plant down (cattail fluff, dandelion seeds and the like) with one or two forays to gather spider silk. These she arranges into a tiny, perfect cup, large enough for her body alone and the tiny eggs to come. A few downy feathers added on the inside, some lichen on the outside for camouflage, and it’s home sweet home.

Her nest established, it’s time to find herself a mate, a task as simple as buzzing coyly through a nearby male’s terrain. There she demurely rests or feeds, and he obliges with his best dive display, followed by a high-speed chase with which she leads him back to her place. The now-excited male offers a song and aerial dance for the calmly perched female, and if he has played his cards right she reciprocates by offering herself to him for three to five seconds of unbridled hummingbird passion.

The courtship having run its course, she has literally no more use for him. He makes his way back home, visions of other female visitors perhaps dancing in his head, and she continues the business of setting up house. Shortly she lays two perfect little eggs, stunningly small, reminiscent of a couple of breath mints. They’re only half a gram apiece, but still weigh 12.4% of her body mass– roughly the equivalent of eight-pound twins for a 130-pound woman. 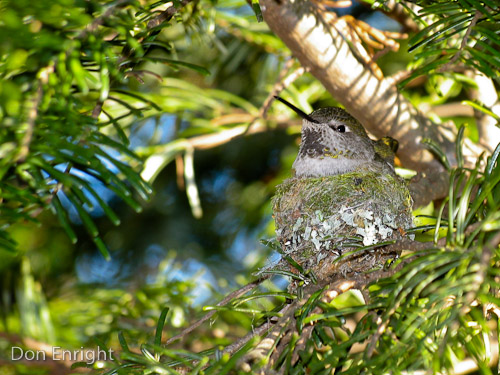 Patiently, quietly she keeps her eggs warm, leaving the nest periodically during the day to feed herself. About sixteen days later, two tiny, squirming creatures emerge, blind, helpless and nearly naked. Naturalist D.R. Dickey described them in 1940 as “black grubby caterpillars, with smoky fuzz in 2 lines down the back, and squat, yellowish mouths that gave no hint of the future awl-like bills”.

Tiny they may be, but these youngsters’ appetites are prodigious, and their mother must now turn her full attention to gathering enough food to fuel their spectacular growth. With her long beak, tube-like tongue and mastery of hovering flight, she’s perfectly adapted to nectar-gathering, but hummingbirds are also accomplished insectivores, and our female will need both skills in the weeks to come. She favors nectar for her young ones in the morning, switching to small insects in the afternoon, presumably to give her chicks extra substance to tide them over until morning. By day seven, as Dickey noted, “respectable pin feathers transform them from loathsome black worms into tiny porcupines”, and by day nine, they weigh about as much as their mother. By day twenty, that little nest is getting crowded; fortunately the youngsters are able to avoid fouling their home by backing up to the edge of the nest and projecting their feces away with a powerful squirt. 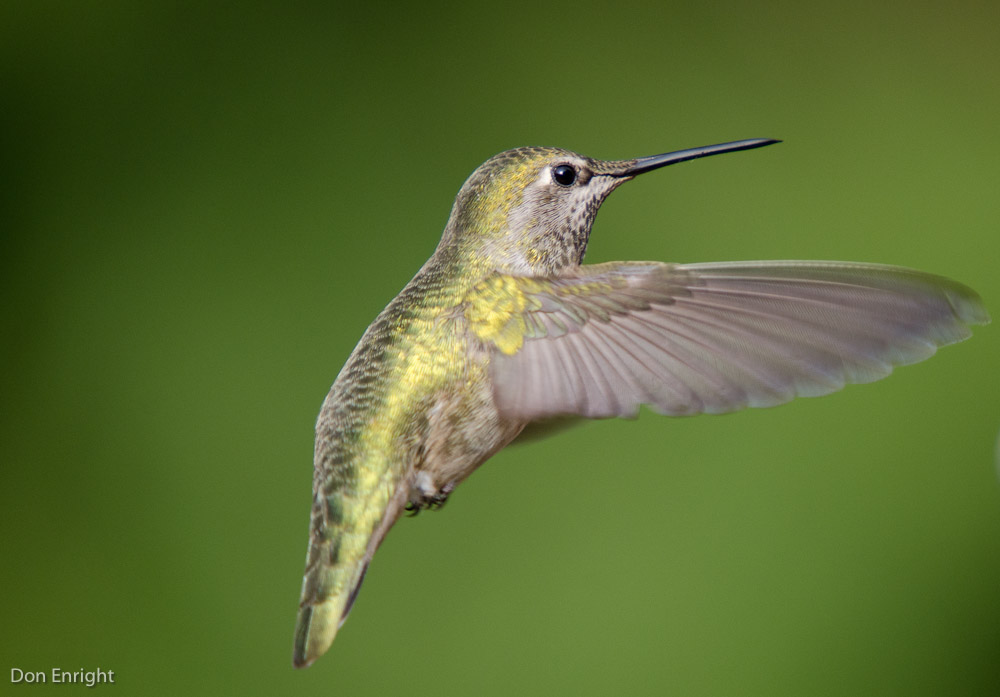 At about three weeks of age, our two chicks are ready to fledge, though they don’t go far in their first few days. They spend their time perching together, buzzing their newly-feathered wings, gawking at moving objects, and gaping for food from their mother, who obliges several times each hour. It doesn’t take long before the two fledglings begin catching insects themselves. Within ten days they are able to visit feeders on their own, signaling a shift from dependence on their mother to a reliance on human benefactors that may last a lifetime.

I’m often asked if bird feeders are a good idea. Many backyard birders worry that they are fostering an unnatural habit in birds that would otherwise remain wild. In the case of the Anna’s hummingbird, it seems clear that without human bird feeding, the species would not thrive in our area; whether it would die out completely is unknown. Its presence in our ecosystem, however, doesn’t seem to have come at a cost to native species; it seems to have found its own niche at no detriment to the rufous hummingbird, as far as we know.

I for one have no issue with feeding this remarkable little bird. I would certainly encourage hummingbird feeders over seed hoppers that cater to that most unsavory of exotic species, the house sparrow, who fills its little belly at our expense while actively destroying the nests of chickadees, juncos and other precious native birds. As long as you keep your nectar feeders fresh and clean, I say feed away. If the hummingbirds could thank you, I imagine they would. I know my fellow birders and I, huddled together at first light on a January morning, certainly appreciate it. 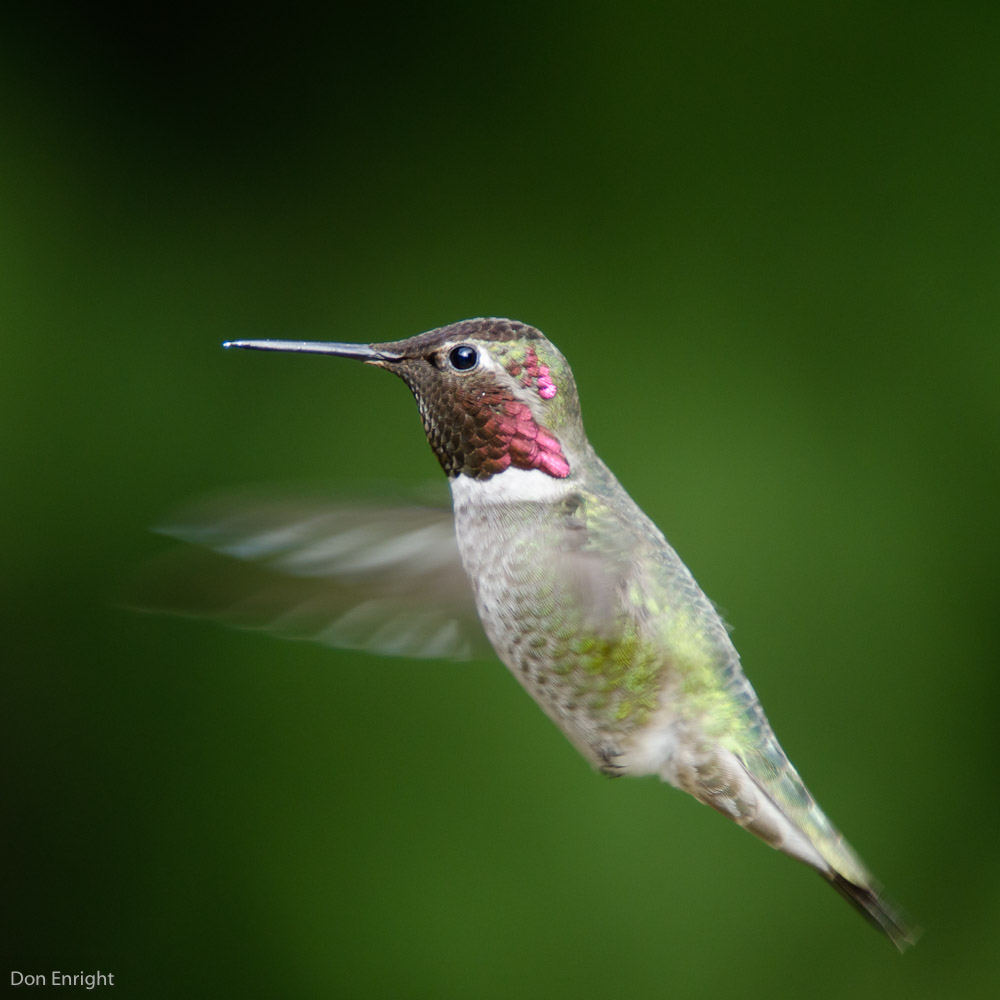